Accept Everything Just the Way It Is

The path towards the key $10K level remains intact for Bitcoin, while Ethereum is also eyeing up its recent highs just below the $300 level. At the same time, the contango delta for Bitcoin futures (Sep – Perp rates) has spiked to its highest level this year and alongside this, the funding rates (longs pay shorts) are also exceptionally high (see data below on swap funding costs by Skew). 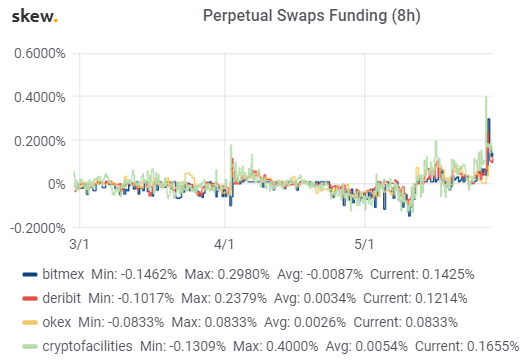 The spikes in contango have been a good proxy of bullish market sentiment, however it is worth remembering that the same exaggerated contango was manifest in Nov/Dec 2017, right before the aggressive pull back. Going against the flow can be particularly painful with such highly speculative and leveraged markets, but risk/reward for contrarians out there will be far too tempting to pass by.

Still, the cryptocurrency market today is very different from the market back in late 2017; not only is it not as concentrated with retail money but also a whole new ecosystem of lending/borrowing has emerged (incl DeFi). On that note, as per a Tweet by Su Zhu of Three Arrows Capital – “Backwardation is a good environment for $BTC and $ETH borrow/lending. Contango is a good environment for $USDC and $USDT lending. In some parts of the world there is now crypto adoption where no one even cares about Bitcoin price-they simply aim to get a higher yield on USD.” This is not to say that the crypto market cannot go higher, the FOMO drive in the past has been so strong that even with fundamentals lagging (as is the case now) there was little to stop prices of crypto from undergoing a huge parabolic rise. 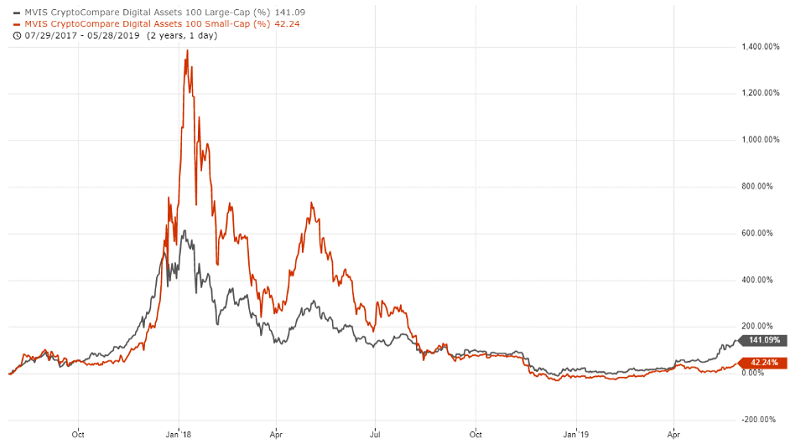 The chart above illustrates the dynamics of the recent rally and it clearly shows that the large caps (dark line) have outperformed the smaller cap (red line) assets. This could be a cause of worry, as one would have expected the higher-yielding assets to pick up the pace. However, going back to the rally end of 2017, the altcoin market really only gathered significant momentum during the very closing stages of the bull run. As such, the current deviation should not be viewed as abnormal.

As pointed out last week, CME Bitcoin futures are due to expire on May 31, and given the growing participation, as evidenced by the daily traded volume activity, that means that particular attention should be paid to the number of contracts that are rolled to the next expiry. Around 50% of the total CME Bitcoin futures open interest is set to expire (see CME contract table below) and the cryptocurrency market will react favourably should market participants decide to roll the majority of the expiring contracts into the next contract window, since this would point towards “commitment” from institutional type accounts. As it stands, open interest (OI) for the month of May is at 2,717 (same as last week Friday), the June contract now has 1,316 (up from 1,173) and July is at 303 (up from 231). In total, the OI is at 4,804 (up from 4,584). The next few days will be telling as to whether the roll will accelerate further, which in turn would be supportive of the underlying sentiment. 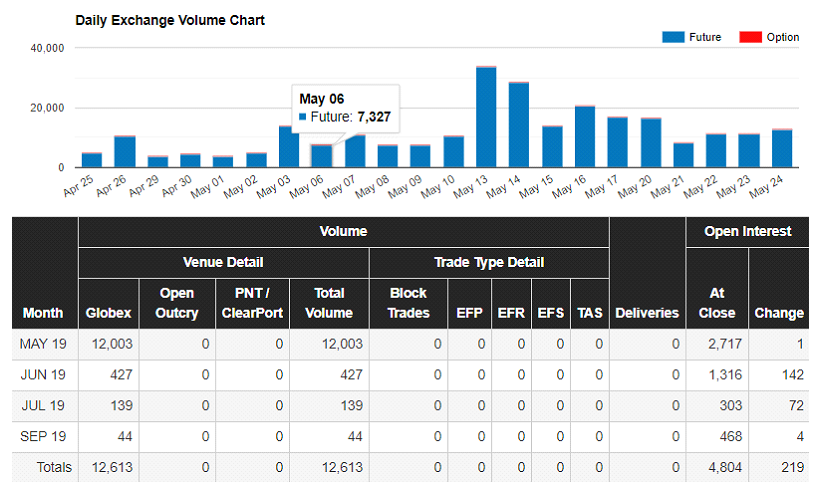 Elsewhere, the trade war between the US and China may be overshadowing global macro trends, but the latest reports regarding China's Baoshang bank takeover have also raised fears of contagion within the local banking ecosystem. As pointed out by Bloomberg, China’s central bank injected a net amount of 150 billion yuan ($21.7 billion) through open-market operations on Monday and Tuesday, the most since the week ended March 8. This comes after regulators announced late last week that they will take control of Baoshang Bank Co. citing “serious” credit risks, which in turn has fuelled worries of failures elsewhere and driving up funding costs. As a guide, the benchmark 7-day repo rate rose further Tuesday to the highest it’s been in more than a month.

In other news, as reported by CoinTelegraph, China updated its cryptocurrency rankings — with EOS retaining the top spot and Bitcoin moving up three places. The government-sponsored index assessed each blockchain on three criteria: technology, application and innovation. Joining EOS in the top five was Tron, Ether, Steem and Ontology. EOS has held the top spot since June 2018, while Tron has managed to stay in second place since February 2019.

Finally, Chairman of the Board of the Bank of Lithuania and a member of the Governing Council of the ECB, Vitas Vasiliauskas, commented that central bank digital currencies (CBDC) should serve as a medium of exchange, a means of payment and a store of value, reflecting qualities of the current forms of central bank money, but not as a conventional reserve account or a private crypto asset. In the event of the release of the retail CBDC, it would be available to the general public, while access to the wholesale one would be open to financial institutions only.