If standard cryptocurrency ratings with market capitalization, volume, and price change are all not sufficient enough for you to choose a valuable cryptocurrency, keep on reading. We will show you other ways of evaluating cryptocurrency projects before making investments. The following is Part 2 of the Alternative Crypto Rankings article, and it reviews 3 additional ranking companies with alternative approaches to ratings: China’s Center for Information and Industry Development, TokenInsight, and Rency. We will present their rating systems, methodology, latest developments, and discuss the community’s reaction.

CCID claims that it is operating under China’s Ministry of Industry and Information Technology. It has been providing monthly crypto ratings since May 2018. CCID blockchain research institute conducts research in collaboration with multiple organizations including the China Software Evaluation Center. The ranking is a part of the technical consulting services that CCID provides for government agencies, business enterprises, research institutes, and technology developers.

The latest and 12th report of CCID was published in May 2019, and it had 35 cryptocurrency projects ranked. It had minor changes as compared to the previous issue in March 2019: EOS is still #1, followed by TRON and Ethereum. Bitcoin, which was previously ranked 15th, has managed to climb up to the 12th position. 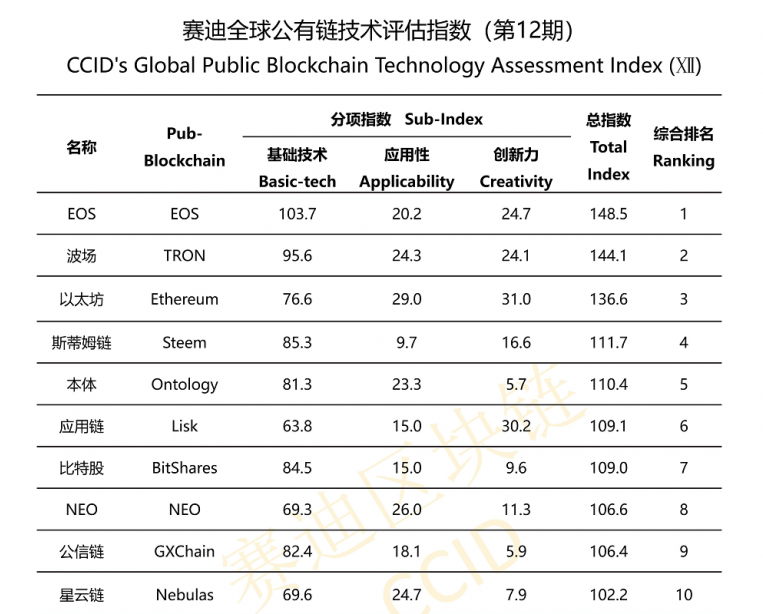 As CCID noted, the world’s three major Dapp platforms — EOS, Tron, and Ethereum — are still in the top three. TRON was added only to the 10th report, which was released in February 2019, and it beat out Ethereum for second place. By the way, Ethereum held the first position for a long time, but then EOS became a sure winner.

The total rating of crypto projects is a sum of three sub-indexes:

Justin Sun of TRON brought the news on Twitter:

Justin Sun claims that TRON is #2 according to CCID.

But casual users jumped at the chance to make fun of it: 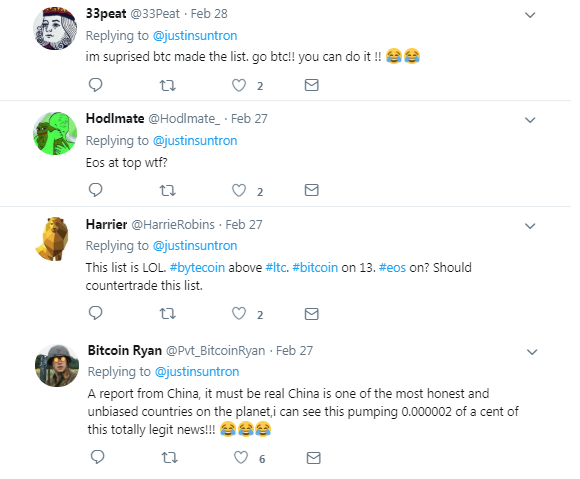 Colin Harper, an associate editor and staff writer for Bitcoin Magazine, published an article titled “CCID’s Crypto Rankings Are Pointless (and They’re Not Official)”. As the title suggests, the author is very skeptical about CCID ratings. First, he points out that the Chinese government “doesn’t sponsor the rankings, it doesn’t endorse them, and it sure as hell doesn’t make them.” Second, Colin blames CCID for some kind of pay-to-play, because they don’t list every project, but suddenly some little-known projects with unclear history and prospects are on the list. Moreover, 6 out of the 10 top projects are predominantly Chinese, which also raises suspicions.

The latest major update from CCID is that the reports are now published not monthly, but once every two months. In the May version, no new projects were added compared to the March issue. And, by the way, the list of cryptocurrencies hasn’t expanded that much since the first issue in May 2018: initially there were 28 coins, now there are 35.

TokenInsight claims that their goal is to create a proper framework to systematically evaluate projects in the crypto ecosystem. They say that their ratings, research, and analysis can be useful for better understanding and intelligent decision-making. TokenInsight reviews and reports get around 350,000 views on average and are delivered to more than 50 international media partners and 20 of the largest exchanges.

Token projects are evaluated both qualitatively and quantitatively and are finally graded according to the TokenInsight rank system. AAA grade is given to the most solid and low-risk projects, while D is given to problem-plagued projects which are likely to fail.

There have been no projects graded AAA so far, and Bitcoin and Ethereum are the only cryptocurrencies (out of 292 evaluated) that are graded AA and A respectively. They are followed by Binance Coin, TrueUSD, Bitcoin Cash, Huobi Token, EOS, OKB, XRP, Basic Attention Token, ICON, 0x, Litecoin, Vechain, TRON, NEM and Cardano, all graded BBB.

Moreover, there is a rating outlook which indicates rating trends for the next 3-12 months:

For example, Bitcoin is AA Stable, while EOS is BBB Positive.

Each token project is analyzed in the following areas: team, project, ecosystem. 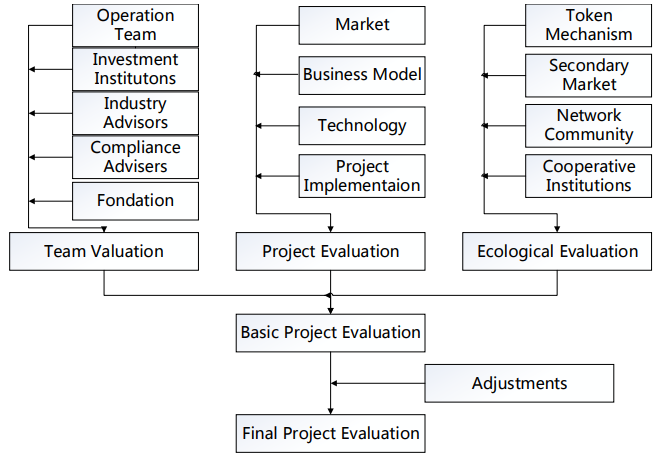 TokenInsight is not really active on social media: its Twitter has just 2,000 followers, its Telegram channel: 200, and its Medium: only 152. However, the community seems to trust TokenInsight’s ratings and reports.

Justin Sun, CEO of TRON, who’s very fond of ratings (but only when TRON is rated high), bragged on Twitter using TokenInsight data. 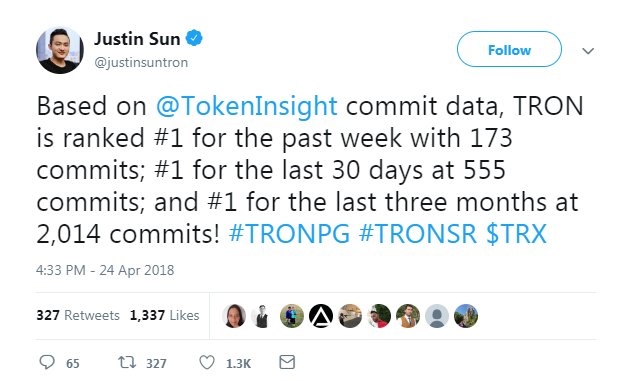 It’s important to note that TRON was #1 only in terms of commits, i.e., changes to the working code added on GitHub.

Other crypto projects also never miss an opportunity to tell the world about being highly rated on TokenInsight.

It was announced on May 15 that TokenInsight had partnered up with Messari, an open-source crypto data library. TokenInsight’s rankings are now live on Messari's OCFX (OnChainFX) dashboard. According to the TokenInsight team, this partnership is an important milestone on the way to the full transparency of the blockchain ecosystem.

On June 12, BitMart, a global digital asset trading platform (and one of the top 30 exchanges according to adjusted volume) announced a strategic partnership with TokenInsight. The companies are planning to introduce a collaborating rating platform. As the BitMart team claims, this partnership will better serve BitMart’s users and clients as it will help them make more informed trading decisions.

The Rency team claims that the blockchain industry lacks clarity and objective analysis. Their aim is to build standard benchmarks to compare crypto projects. Rency compares projects across ten different categories, highlighting those which have the most value and promise. Rency publishes all their rating updates on their website for free, but thorough analysis and detailed reports are only available for an additional cost.

Rency evaluates crypto projects on 10 different criteria, which will be described in the Methodology section, and rates them from grade A (excellent project) to E (very poor project).

The grades can also get a + or -, indicating whether the project improved its performance or made it worse recently. According to the Rency’s ranking, only Stellar (XLM) got the honor of being graded A-, other projects got Bs and worse.

Here’s how the list of the top 10 cryptocurrencies looks according to Rency. Note that Bitcoin and Ethereum occupy the 8th and 9th positions respectively, both graded B-. 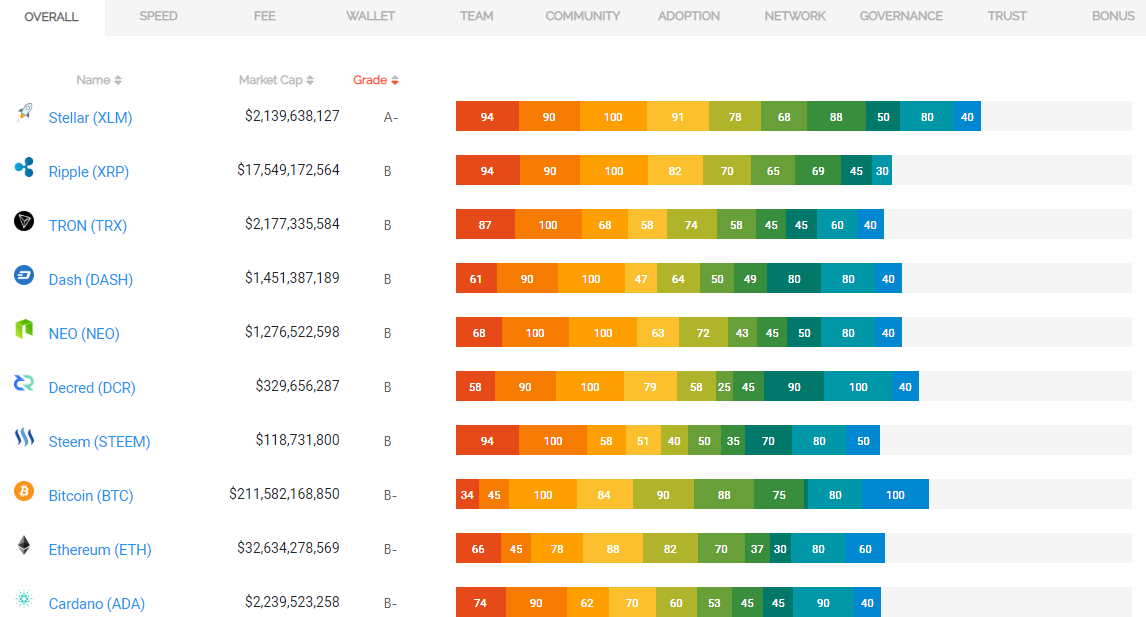 Rency has drawn out 10 key features to evaluate projects, for each feature the project gets from 0 to 100 points. Then the points are summed up to get an overall rating.

Speed. The number of transactions per second a network can handle. Stellar, Ripple, and Steem are the leaders with 94 points.
Fee. The cost of a transaction within a network. Steem, EOS, Nano, and some other cryptocurrencies get 100 points, as their fees are zero.
Wallet. A wallet should allow users to easily store, send, and receive cryptocurrency; it should be cross-platform and available for integration with third-party providers.
Team. Team size, quality, and activity. Stellar has the best team according to Rency, scoring 91 points.
Community. Community work (as providing relevant information for users) and social media activity. Bitcoin has the best community with 90 points.
Adoption. Market cap, partnerships, integration, exchange listings, etc. Bitcoin is the leader with 88 points.
Network. How decentralized and robust the architecture is, how resistant it is to attacks. Stellar is #1 with 88 points.
Governance. How an ecosystem is governed, how disputes are resolved and how funds are allocated. Decred (DCR) is on top with 90 points.
Trust. Reputation and history of a coin, transparency of a team and code. Decred, Factom, OmiseGO, Enigma, Siacoin, and 0x are all highly reputable and transparent according to Rency, as they got 100 points.
Bonus. Projects can get bonuses for some additional features like rewards, legal compliance, privacy, security, strong partnerships, etc. Bitcoin got the most bonuses with 100 points.

If you log in to the site, you will be able to customize your rankings. For example, if speed is the most important feature for you, choose ‘Critical’, and if you do not want to pay attention to fees, choose ‘Don’t Care’. This can be done for all ten criteria, and the ranking will be adjusted according to your preferences.

A customizable crypto ranking on Rency.

Rency got the greatest response from the community when it ranked Stellar as #1 more than a year ago. Though many users on the Stellar subreddit were happy to hear it, some were skeptical. Most of them hadn’t even heard of Rency before. Some didn’t agree with the ranks or methodology. Anyway, it sparked intense debate. 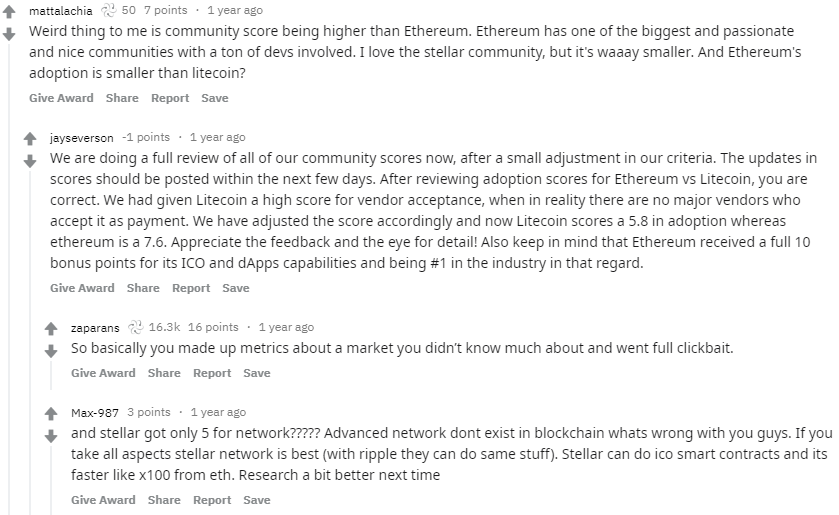 Another user on Twitter blamed Rency for not understanding the speed concept. He even tried to connect with the team but got no reaction or response. 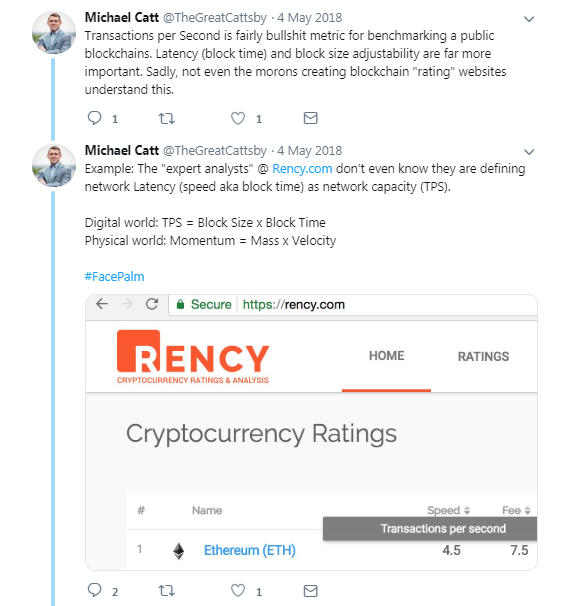 A user claims that Rency doesn’t understand the difference between the network latency and network capacity.

Unfortunately, Rency hasn’t been very kind to its users recently as there are few (in fact, almost no) updates on their site and social media. The last free article was published on Jan. 21, 2019, and the site offers a free 14-day trial, but to start it you have to fill in your credit card details.

It’s a good time to, once again, point out that ranking sites can be useful, but it’s not a wise decision to rely on them entirely. They could be biased, outdated, using an unclear methodology, or have little knowledge of blockchain industry. It’s always useful to compare ranking systems and explore their similarities and differences. Crypto ranking sites can also serve as a starting point for your own investigation since they provide some useful additional info. Never miss the opportunity to read the technical documents of a project, to learn more about the project’s team and to visit the project’s social media pages. Actually, all of this is done (or claimed to be done) by experts and analysts of crypto ranking firms, but you’d do better to look for yourself.