Bakkt, a startup owned by Intercontinental Exchange (ICE), is built on tested and regulatory compliant infrastructure, and backed by powerhouses like Microsoft, Starbucks and the BCG. The firm seeks to become a global ecosystem to provide institutions, merchants and consumers with transaction and warehousing services for digital assets. However, since the first announcement back in August 2018, its launch has been delayed several times.

If they succeed, this could be cryptocurrencies’ ticket to the mainstream financial landscape, bringing over the institutional capital and governmental acceptance that some in crypto world have been longing for. On the other hand, Bakkt has amassed such momentum that a failure to launch at this point could offset dire consequences in the crypto market. With great power, comes great responsibility.

What does Bakkt have to offer, why are they taking so long to launch, and have we underestimated the impact that either a success or failure scenario might have?

Bakkt is an open, global ecosystem with regulated custody and market-based solutions for the purchase, sale and storage of digital assets. The company’s mission statement is to address the market manipulation, security risks and regulatory ambiguity that have so far discouraged both consumers and investors from coming closer to cryptocurrencies.

The following is an overview of Bakkt’s most notable features, incorporating information from their latest updates.

Even if you are not particularly happy about regulation-friendly crypto, you should keep tabs on Bakkt if only for this one reason: Bakkt has developed the first-ever one-day physical delivery Bitcoin futures contracts. They will be traded on ICE Futures US (IFUS) and cleared on the CFTC-regulated exchange and clearinghouse ICE Clear US (ICUS).

The first contracts will be offered against fiat currencies (including USD, GBP and EUR). For example, a customer will be able to buy a USD/BTC futures contract and receive one Bitcoin delivered into their account each day. The idea is to let people perceive Bitcoin as a useful coin, rather than exclusively a trading tool.

According to an update published by Bakkt CEO, Kelly Loeffler. on May 13, 2019, Bakkt plans to list two kinds of futures contracts: a daily settlement Bitcoin future for same-day market transactions, and a monthly bitcoin futures contract, which will enable trading in the front month and across the forward pricing curve.

In the same May 13 update, the firm confirmed preparations for user acceptance testing (UAT) of futures and custody, an operation they hope to implement this July, and which they have been working on in tandem with ICE’s exchange and clearing partners. 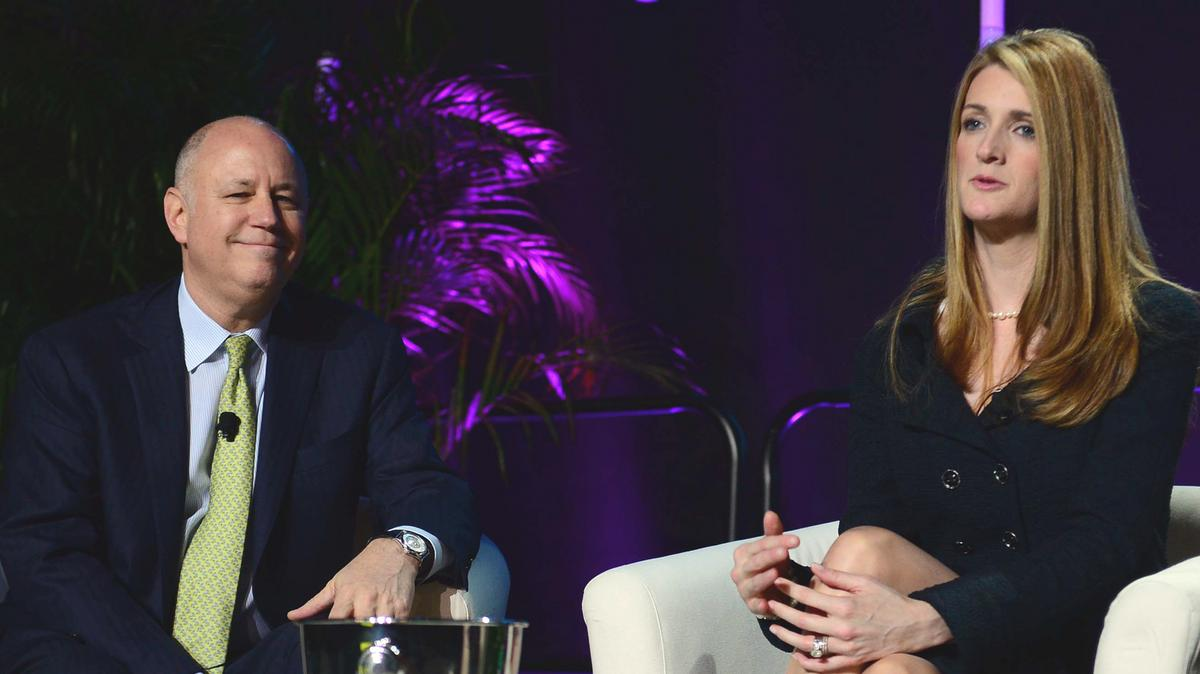 If Bakkt earns the CFTC’s approval and effectively deploys the setup described up until now—a federally regulated custody, exchange, and clearinghouse—we will be witnessing the first ever end-to-end regulated crypto price discovery.

This is no minor detail. Until now, futures contracts at CME and CBOE have been cash-settled, and they base Bitcoin prices on underlying, unregulated cryptocurrency exchanges. This is the main reason why the SEC has rejected Bitcoin ETFs.

Bakkt is built on Microsoft’s Azure cloud and relies on the same regulated futures market infrastructure that the NYSE uses. The platform will have hot wallets, but the majority of user funds will be stored in air-gapped cold wallets insured with a $100,000,000 policy. On-chain and off-chain security measures, including multisig, will be employed to protect cryptographic keys. Finally, an external layer of automated controls including multi-factor authentication, destination address whitelisting, and role-based permissions is in the works, plus a geographically-distributed storage of private keys secured by BNY Mellon.

The team has been working in with the United States Commodity Futures Trading Commission (CFTC) to make their contracts compliant on a federal level. Needless to say, Bakkt will comply with AML and KYC laws, market surveillance rules, and federal reporting standards, and will not launch until it has secured the approval of the CFTC—read the section Launch Delays for more on this. 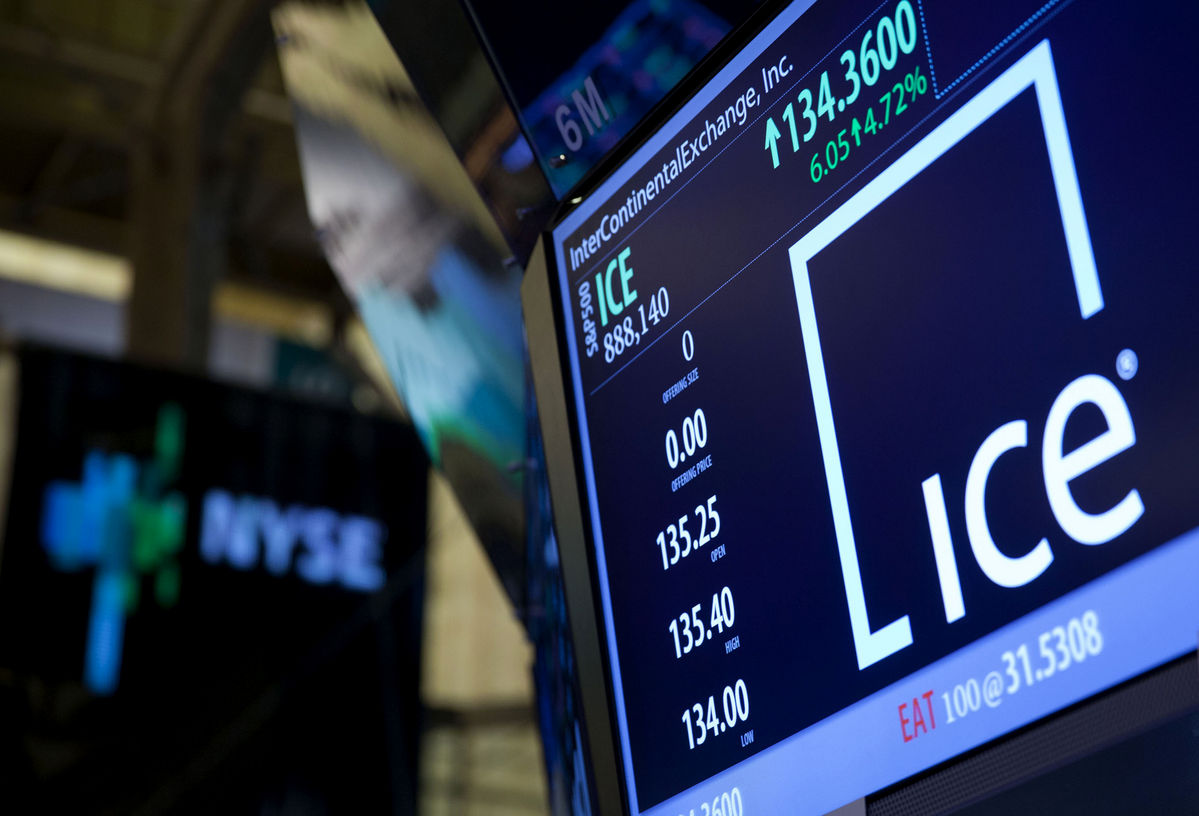 As mentioned, other companies in the crypto space (like Coinbase or Circle) are offering extra safe crypto warehousing as well. But since Bakkt is owned by ICE, it has access to tech and data that other crypto startups could only dream of.

Not just that, but ICE’s clout means powerful backers have signed on. Bakkt COO Adam White has expressed his confidence that ICE’s “familiar brand” will be beneficial to the project (Fortune). He is not wrong so far: Bakkt has managed to bring Microsoft, Starbucks, BCG onboard, and experts agree this marks a milestone in cryptocurrency history.

Their most notable company is the New York Stock Exchange, the world’s largest equities-based exchange in the world (based on the total market capitalization of its listed securities). As of late, ICE has shifted focus towards its data services business. The company’s stock has grown consistently at a CAGR of 6% in the last ten years (Forbes).

For a quick look into just how huge ICE’s operations are, we recommend checking their fact sheet, here. For a breakdown of their revenue, click here.

Interestingly, Bakkt’s ties to ICE are not only legal and economical, but deeply personal: Bakkt CEO Kelly Loeffler is actually married to ICE CEO Jeff Sprecher. 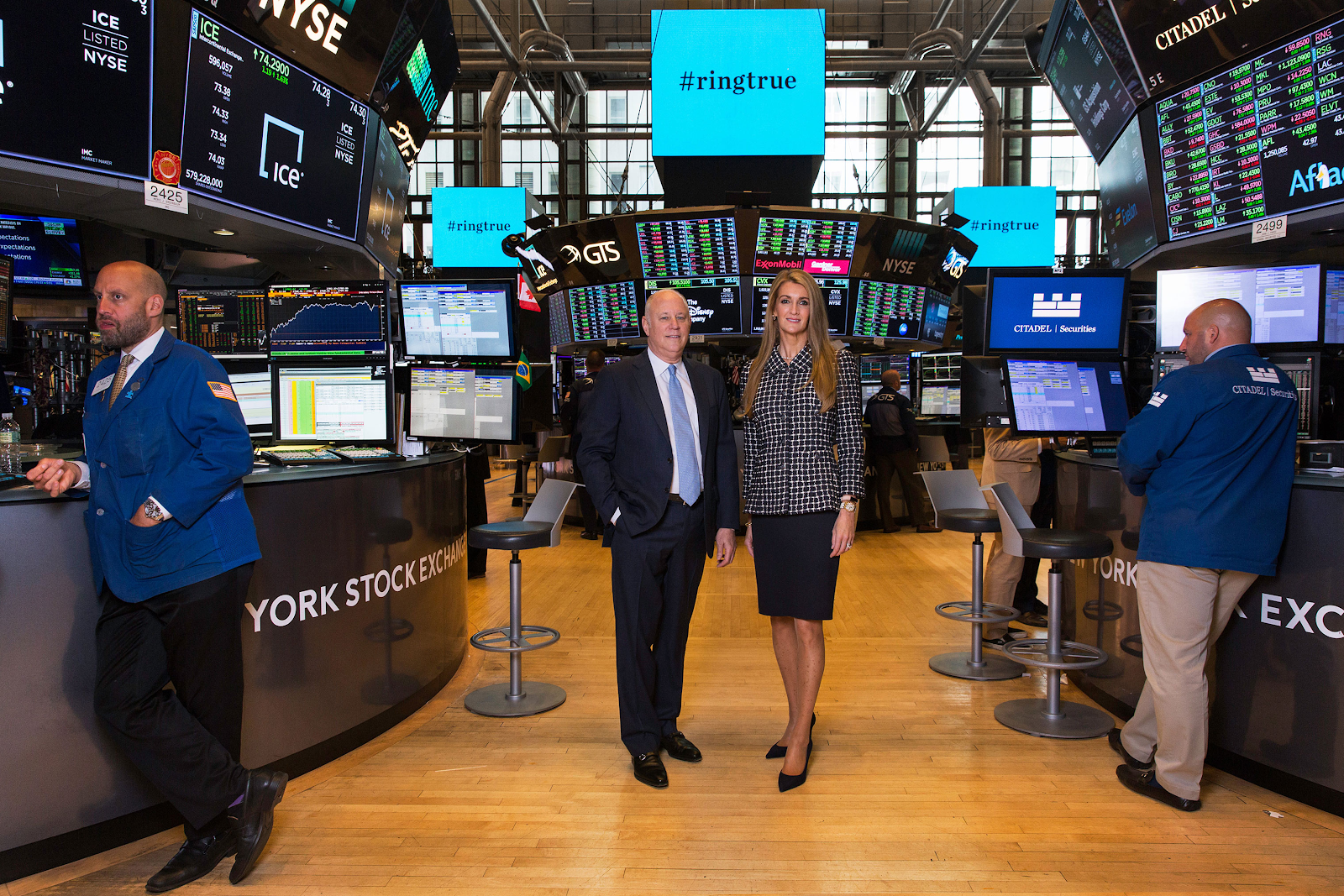 CEO of ICE, Jeff Sprecher, poses with wife, Kelly Loeffler, former ICE executive and current CEO of Bakkt, on the trading floor of the NYSE on July 9, 2018.

Who invested in Bakkt?

In December 2018, Loeffler announced the completion of a successful first round of funding, in which twelve partners and investors contributed a grand total of $182.5M.

Why We Could Use Some Institutional “Bakkers”

The reason behind Bakkt’s fervor for safety and regulatory compliance is to bring heavyweight institutional backers—along with their associated merchants and consumers—closer to crypto in order to inject the space with the capital and confidence necessary to stabilize the market. The company holds that a stronger, less volatile crypto market should make assets more liquid and ubiquitous, and this safe terrain will be a fertile ground for innovation and investment.

It is a popular opinion, expressed at one time or another by several figures in the financial sphere (check Henri Arslanian), that bringing institutional money into the cryptocurrency sphere will be extremely beneficial. The massive amount of capital that the crypto industry is missing out on by playing on the sidelines has been the suspected reason behind its extreme volatility.

Why Bakkt Is Such a Big Deal: Bitcoin ETFs

CNBC’s Brian Kelly has called Bakkt’s announcement “the biggest Bitcoin news of the year”, and explained that Bakkt is effectively paving the way for a Bitcoin ETF.

“That’s going to make it a lot easier for an ETF to come through. It is even better than Bitcoin Futures…[because] they are talking about getting this into your 401k. They are talking about getting it into your Schwab, Fidelity or TDAmeritrade account…you are going to be able to buy a Bitcoin ETF, a Bitcoin Mutual Fund. It expands the universe,” he added.

This is a widespread opinion. Bakkt’s design addresses concerns that the SEC had already explicitly voiced in the past when explaining why it has rejected previous Bitcoin ETF applicants, including the Winklevoss twins.

Dan Morehead, the CEO of Pantera Capital, which invested in Bakkt’s first funding round, said “Bakkt is huge news (…) (It) is going to be a very profound impact over the next five or 10 years for the markets, and, to my mind, that's what people should be focused on.” 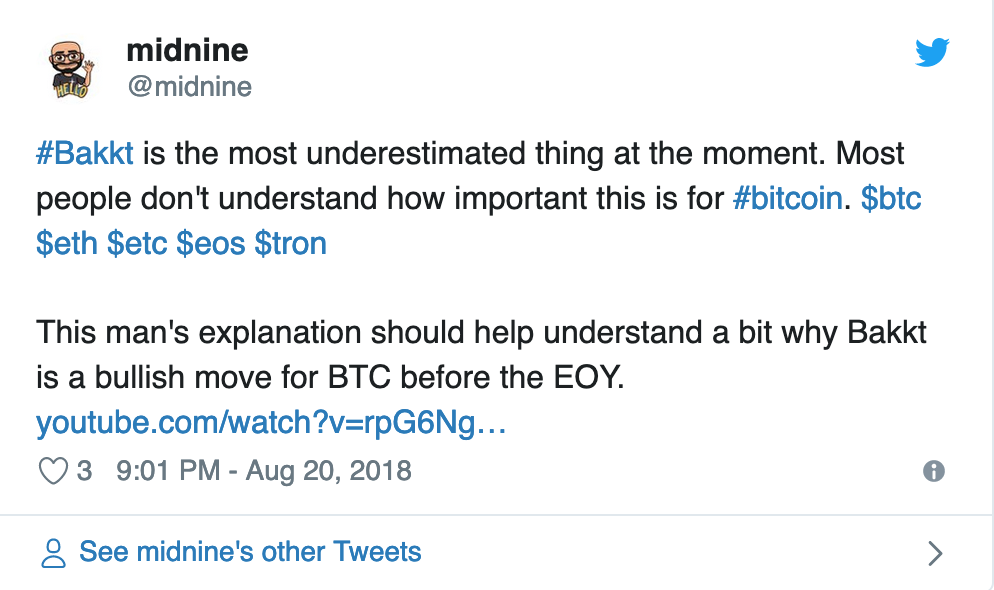 Many online are Bakkt enthusiasts.

How Much Money Will Bakkt Make?

During an earnings call on Feb. 7 (listen to the call here), ICE CEO Jeff Sprecher commented that he expects Bakkt will contribute to ICE’s revenue when launched. Sprecher also mentioned that ICE spent over $1B on strategic initiatives in Q4 2018, which included the launch of Bakkt. ICE allegedly plans to spend over $20M on Bakkt in 2019.

Expectations for the investment to pay off are high. Bakkt CFO Scott Hill was quoted saying "our investment in Bakkt will generate $20M to $25M of expense based upon the run rate in the first quarter. We will update you on progress at Bakkt and the level of investment as we move through the year".

According to Cointelegraph, Sprecher characterized the crypto platform as a “moonshot bet”:

“So it's a bit of a moonshot bet and it's been organized in a manner that is very different than the way ICE typically does businesses (...) They're well along in building out an infrastructure that I think you'll see launch later this year.”

It may seem that Bakkt can do no wrong, but there are those who have discovered reasons to be skeptical, or even downright worried. Wall Street veteran Caitlin Long has explained how Wall Street is looking to “financialize” cryptocurrency, and eventually influence coin prices via derivatives markets. Last year, she claimed Bakkt could represent leverage-based financialization over Bitcoin.

Loeffler responded to these concerns explaining that this will be avoided by limiting futures sales to physical delivery, and fully collateralizing or pre-funding Bitcoin sales and purchases. “Our new daily Bitcoin contract will not be traded on margin, use leverage, or serve to create a paper claim on a real asset. This supports market integrity and differentiates our effort from existing futures and crypto exchanges which allow for margin, leverage and cash settlement,” explained the CEO.

To this, Long rebutted that the company remained silent on the possibility of hidden leverage through the rehypothecation and commingling of collateral in the clearinghouse. Find her full Twitter thread explaining this theory here. Read her article on this subject here. 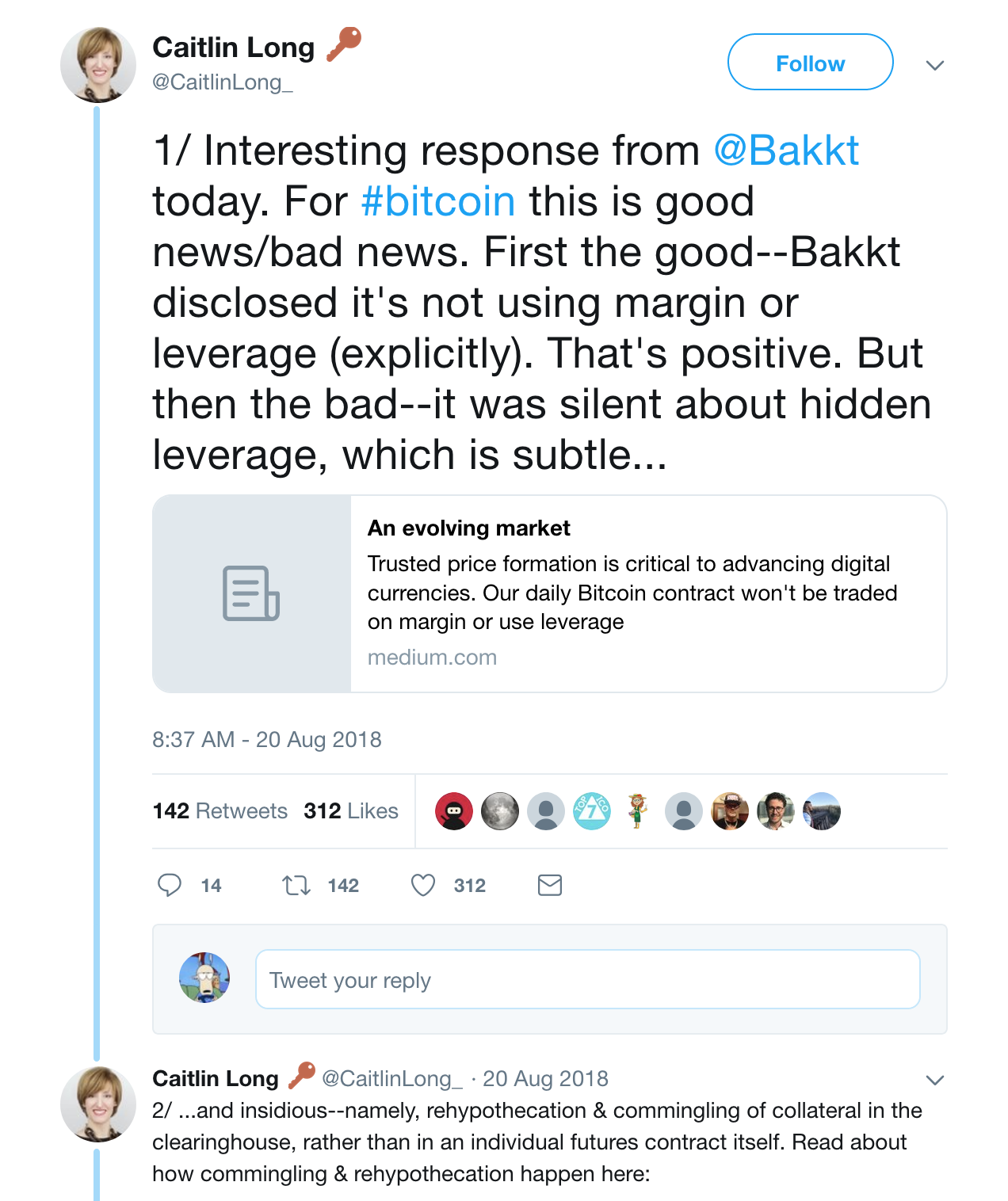 Since ICE wants Bakkt to be absolutely compliant with the CFTC's standards, this regulatory body has had full control over the highly anticipated platform's launch date. And they're in no rush: though ICE first announced Bakkt in August 2018, the original November 2018 launch date has been postponed twice.

The main deterrent has been Bakkt's application for an exemption to normal asset storage regulation; CFTC rules require that customer funds be held by a bank, trust company or futures commission merchant (FCM), but Bakkt's proposal insists on storing customers' BTC themselves. Then there was the US government shutdown in late 2018, which doubtless also played a role in slowing down the CFTC's work.

During the aforementioned earnings call on Feb. 7, ICE CEO Jeff Sprecher commented that he expects Bakkt will launch “later this year” (listen to the call here). 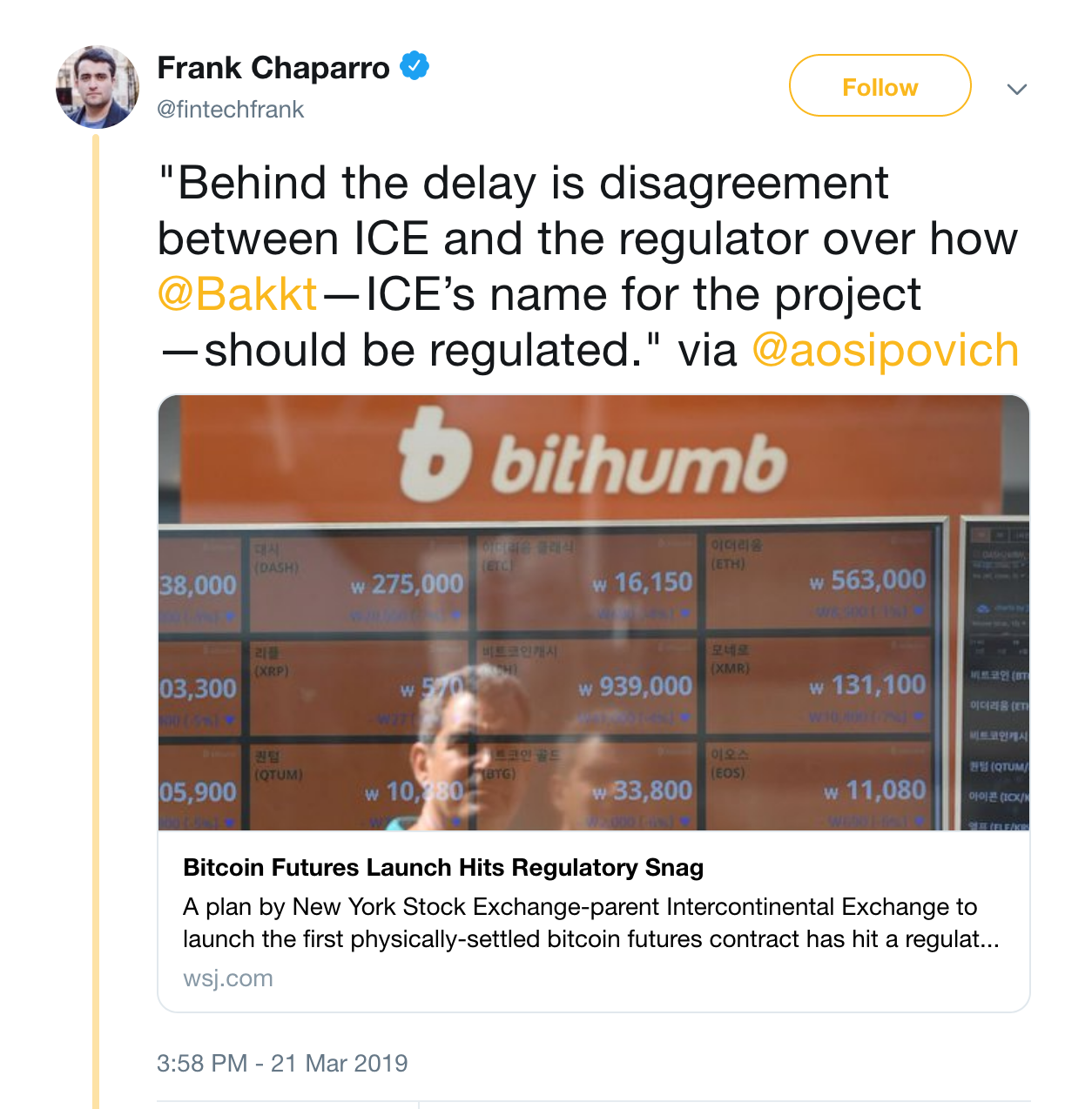 Bakkt has been delayed several times due to CFTC concerns.

But if you don’t want to see Bakkt become a reality, should you care? Perhaps. Some believe that even for those who are not Bakkt fans, their delays could mean a problem, because at this point the hype is such that the whole market is sensitive to news of its failure or success. After the first delay, which set a new launch date for January 2019, rumors circulated that the Bakkt delay would cause a drop in Bitcoin’s price, and the info was leaked to a handful of large-scale investors in the cryptocurrency market. Some have even speculated the rumor was orchestrated to buy Bitcoin low. It seems, however, that there is no evidence to support this theory.

According to a Morgan Stanley report from Nov. 2018 (here), and confirmed by research findings published in May 2019 by Fidelity Investments (here), crypto trading is dropping in volume, but institutional investment in crypto is on the rise and will continue to grow during the next 5 years. Over the years, Bitcoin has been presented as digital gold, a fundraising mechanism, and a hedge against failing assets. Its interpretation as a new asset class sought after by institutional investors is fairly recent, and Bakkt may come to be known as the leader of this new movement in crypto.

If Bakkt secures CFTC approval, cryptocurrencies may find themselves at the end of an epoch. The days of dark web dealings and exchange hacks will be far, far behind. We will remember them with a chuckle as we stand in line at the corner Starbucks, ready to pay for our lattes with Bitcoin.

As always, thanks for reading.
The COIN360 Editorial Team