Binance’s Launchpad, a platform that hosts ICOs for coins pre-approved to be listed on the exchange, has been the object of much attention since it held a sale for the TRON-based BitTorrent (BTT) token in late January 2019. Errors with the purchasing process left many users fuming empty-handed, while evidence suggesting that 28.44% of the tokens may have been reserved for specific users from the start have sparked angry conspiratorial threads on social media.

This is part 1 of a two part installment. Part 1 revises what exactly happened during and after the infamous BTT sale, what the public’s response was, and how the prices of TRX, BNB and BTT were affected. To learn how you can participate in the Launchpad’s upcoming Fetch.AI token sale, or crowdsource your own company’s token on the Launchpad, stay tuned for Binance Launchpad: the BTT Sale Dissected, Part 2.

Less than a month ago, Justin Sun announced that BTT tokens would have an ICO through the Binance Launchpad on January 28th (see Binance’s sale details here). Through two simultaneous sessions, users would be able to back BTT either with BNB or TRON (TRX). From that point on, the story unravels as follows:

The sale was preceded by Sun’s usual campaigning, which included interviews on Bloomberg and CNBC Africa, plus social appearances with Binance CEO, Changpeng Zhao (a.k.a. CZ). 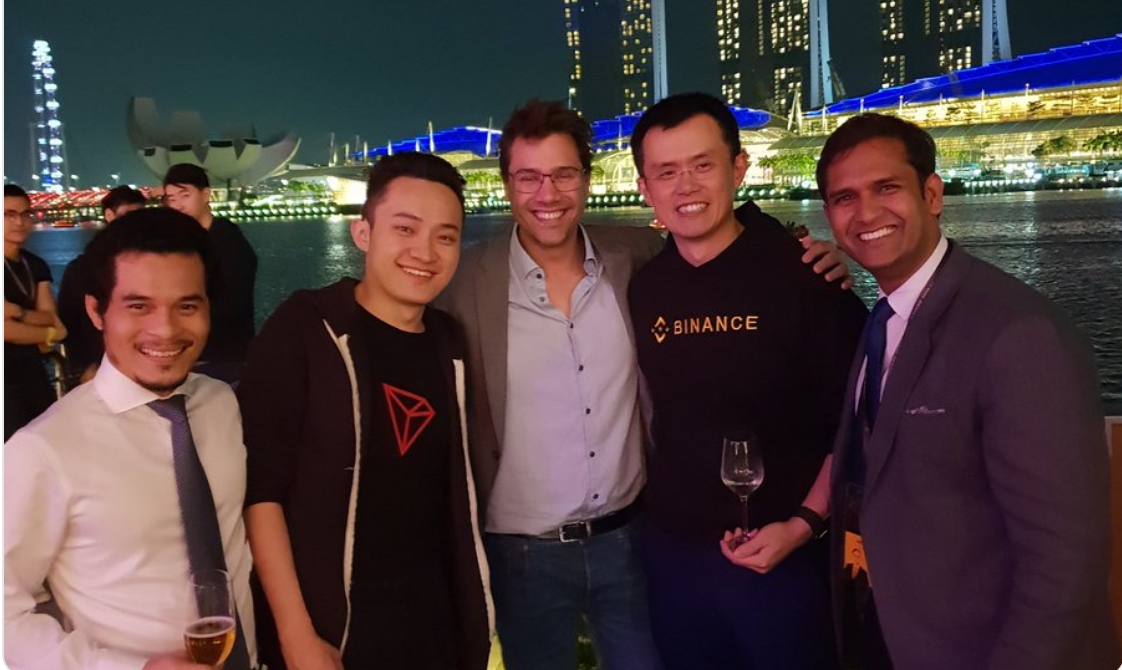 BTT airdrop for TRX holders; not the same as the BTT Launchpad sale

On the 20th, BitTorrent announced a years-long BTT airdrop for TRX holders, which must not be confused with the BTT Launchpad sale. According to the plan, BTT will be airdropped in a 1:1 ratio on the 11th of every month until 2025. The first airdrop took place on February 11th and distributed 1.1% of the supply. Between March 2019 and February 2020, 1.2% of the supply will be distributed each month. Each passing year after this, the percentage will increase by 0.1%: in 2021 the amount distributed monthly will be 1.3%, in 2022 it will be 1.4%, and so on, until 1.7% is distributed during each month of 2025. Hours later, Binance confirmed they would back this airdrop (so did OKEx, Bithumb, HitBTC, and many others).

The day of the sale

On January 27th, 2019, Binance Launchpad opened two sessions for users to buy BTT (one BNB session and one TRX session). Now, here’s where things get tricky: various users have suspected foul play (see these examples on YouTube, Reddit and Twitter (the comments)), and claimed that when they tried to buy BTT, one of several reported errors would occur: the "I agree” or captcha buttons wouldn't work, clicking “Buy” triggered a "Your account has been verified" pop-up message, or the site appeared in a language different from the predetermined one. 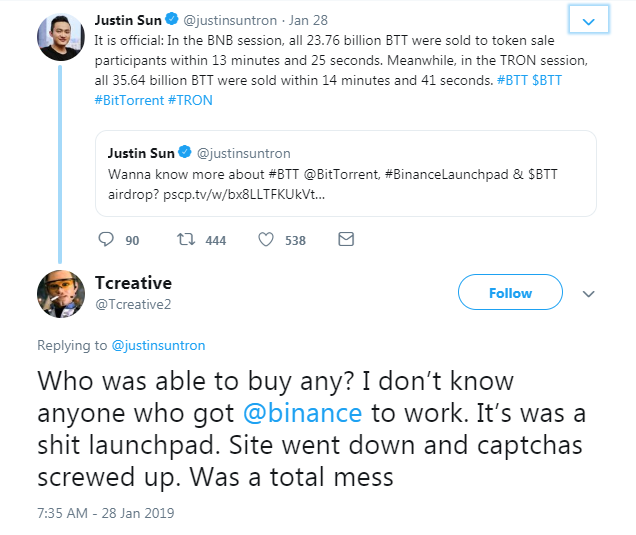 Those who managed to get in would see that 28.44% of the tokens had already been taken, even a mere 3 seconds after the beginning of the sale. See this video for a sample of some errors and the 28.44% caught on camera. Needless to say, users suspect the launch was not actually a first come first served deal. 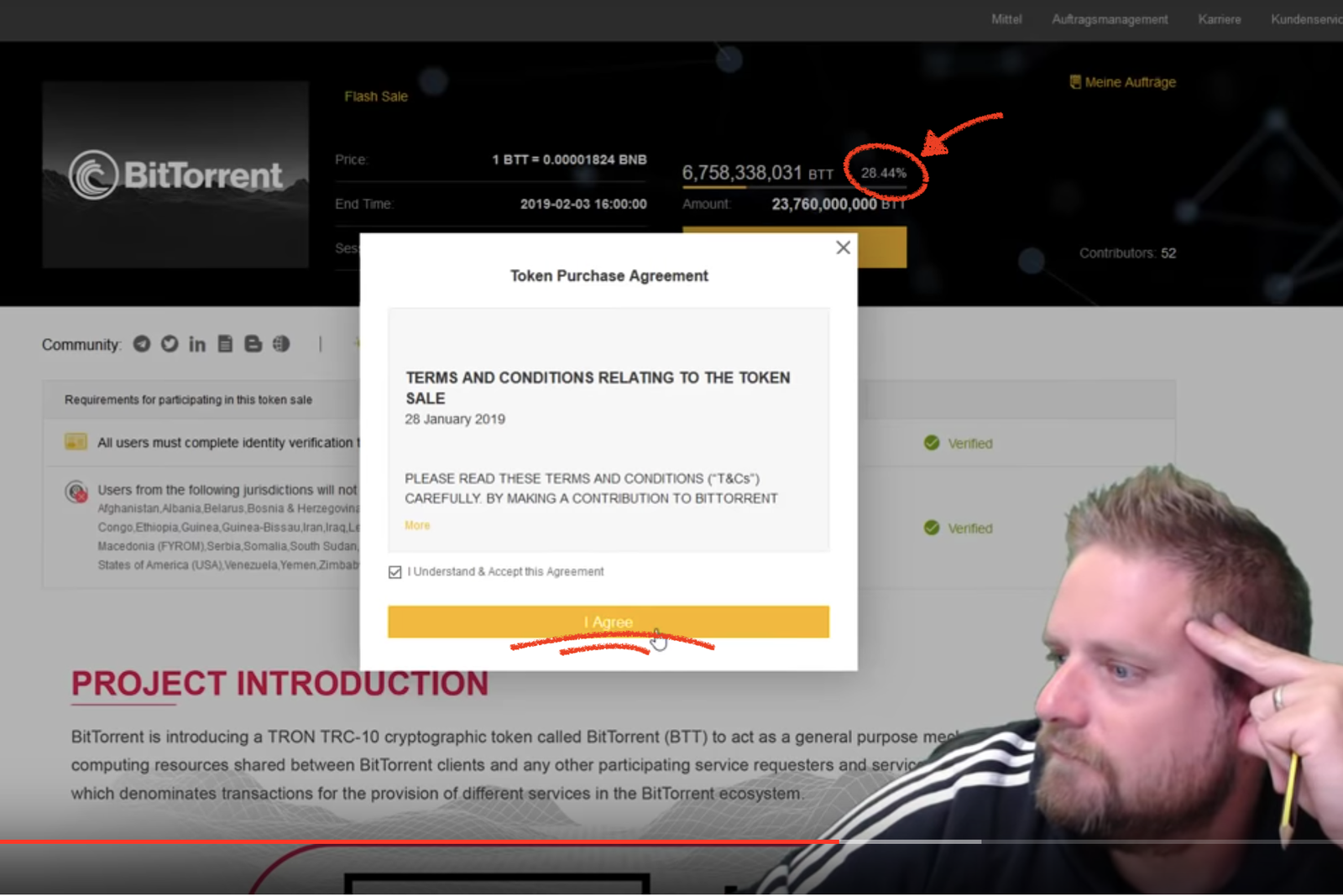 On the 28th, Binance confirmed that all 23.76 billion BTT were sold in under 14 minutes in the BNB session, while the TRON session sold all 35.64 billion BTT in under 15 minutes.

Binance tweeted the sale results, to a string of dissapointed responses. CZ was quick to refer to the reported errors on Twitter (here and here). As a consolation, on the 29th, Binance completed an extra airdrop of 5K BTT to users who tried but failed to participate in the original Launchpad sale. A few users claim they were eligible for this airdrop but received nothing – and more users still joked about the size of the airdrop: 5K BTT are worth $4.87 at press time, and were worth under a dollar back then. On the 31st, BTT officially launched on Binance.

How are the coins involved reacting to this?

Certainly the most dramatic gain from the whole enterpise has gone to BTT, which managed to gain over 600% since the Launchpad ICO to February 5th when it reached $0.001244. The token has since shed some value, and is trading at $0.000994 at press time.

TRX benefits the least of the lot

The event itself has by now been overshadowed by the accusations of scam. Perhaps the most serious accusation says that rather than working a first come first served policy, the first 28.44% of BTT tokens were reserved for whales. Another source of anger for the public is that only 962 participants managed to buy BTT on the Launchpad.

To get an idea of the full intensity of the conspiracy theories surrounding the BTT Launchpad sale, you can check the three part video series on the Chico Crypto YouTube channel (parts 1, 2 and 3). An interesting point brought up in this series (even for those who may find the conspiratorial tone too intense) is that it is TRON, the company, who will proportionally benefit the most from a consolation airdrop of BTT to TRX holders: the public only owns 40% of the supply of TRX. In contrast, 55% of BTT is owned by the public, and 45% by TRON.

CZ has, albeit somewhat indirectly, referred to the accusations of manipulation on Twitter. It can also be said in CZ’s defense that he had commented the day before that the number of users had gone up compared to the Bread and Gifto ICOs, and how this could account for the new glitches. 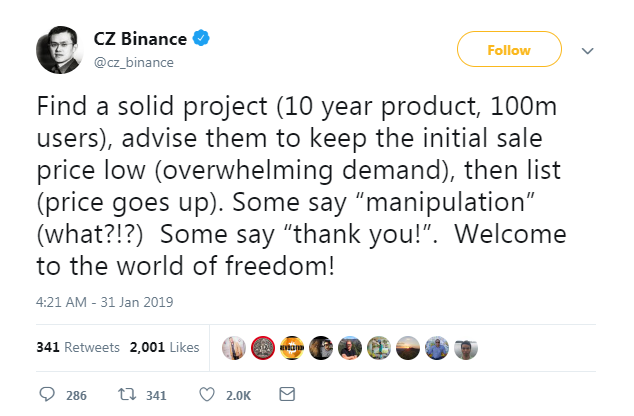 A recurring sentiment in the angry comments that sprouted under each of Sun’s merry tweets during the Launchpad saga was “not this again.” It seems TRON has finally earned a reputation for “scamming,” or at least, for misleading its users – and Binance is joining in too.

The evidence gathered by the community does seems to point towards a reservation of 28.44% of the tokens. Of course, it wouldn’t be the first time an ICO did something less than honorable – it’s just a particularly sad sight to see when it’s 2019 (way past the ICO era), and when it’s someone as flashy and loud as TRON.

As always, thanks for reading.