Bitcoin Lightning Network: The System And Its Criticisms Explained

This high-volume, low-latency scalability solution is considered brilliant by some, and a scam by others. What is the Lightning Network? How does it work, how can you use it, and what are critics and supporters arguing about? Read our summary below.

What is the Lightning Network?

The Bitcoin Lightning Network (LN) is an off-chain, layer 2 scalability solution for Bitcoin. It is essentially a network of participants that connect through off-chain payment channels in order to settle high-volume micropayments — tiny, everyday transactions, like payment for a cup of coffee — in a quick and cheap way. It is, in theory, “capable of millions to billions of transactions per second across the network,” and allows for “exceptionally low fees.”

For further information, visit the Lightning Network’s official website, read its whitepaper, or study its stats.

But, before you do that — read our summary below.

At the time of writing, the Lightning Network counts:

The Lightning Network was first proposed in 2015 by Joseph Poon and Thaddeus Dryja, prompted by the realization that Bitcoin, by itself, “cannot cover the world’s commerce anytime soon” (see the whitepaper, released Jan. 14, 2016).

To put things into perspective, at the time of writing, Bitcoin is only capable of between 3–4 transactions per second, has an average block size of around 1 MB, a median transaction confirmation time of between 5 and 10 minutes with a fee, and people are paying an average of $35 in fees. Evidently, paying a $3 cup of coffee, waiting ten minutes or more at the cash register and paying $30 in transaction fees is not a viable scenario.

For a more extensive history of the Lightning Network’s first implementations, we recommend Aaron van Wirdum’s History of Lightning.

Implementations of the LN for the Bitcoin Testnet and experimental ones for the Bitcoin Mainnet have been around since 2015, developed by companies such as Poon and Dryja's Lightning, Blockstream, Blockchain, ACINQ, Bitfury and Lightning Labs.

The very first to begin work on an implementation was Linux kernel developer Rusty Russell, hired by Blockstream to develop c-lightning: an open, lightweight implementation of the Lightning Network protocol in C (v0.7 launched on Mar. 1, 2019). The start-up also built Lightning Charge, an API for accepting Lightning payments.

However, it was Lightning Labs, with a $2.5 million seed investment round (including investors like Twitter CEO Jack Dorsey), who first released a mainnet Lightning Network implementation on Mar. 15, 2018. It was a beta version of Lightning Network lnd, now lnd 0.4 (Lightning Daemon). Lightning Labs also developed a product called Neutrino, which helps users connect to the LN from their phones. 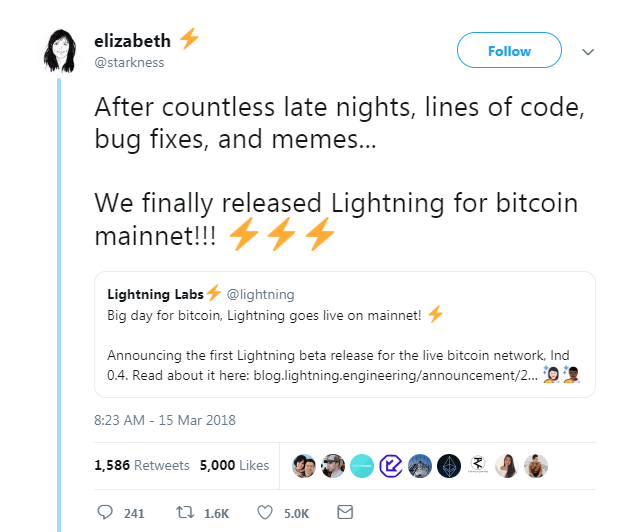 In Jan. 2019, Bitfury released a suite of Lightning Network business products called the Lightning Peach, to enable individual retailers and payment processors to add support for LN payments into their existing infrastructure for e-commerce services (via a web-based Peach API).

How does the Lightning Network work?

The following is a simple introductory explanation. For deeper technical explanations at various levels of difficulty, we recommend you check the Lightning Network developer community resources here.

Although it is a separate entity from the main Bitcoin blockchain, the Lightning Network depends on the blockchain’s transactions and native scripting language to work. Basically, instead of using the blockchain to record payments, it relies on it as an arbiter, voiding the need for a trusted third party. How?

A bidirectional payment channels is, in essence, a smart contract. More specifically, 2-of-2 multisig address: an address that two parties send funds to and that requires both parties’ signatures in order to spend its funds.

You can think of it as an off-chain Bitcoin balance sheet between two users. If a user increases the balance on one side, the balance of the other side will decrease by the same amount. This can be done as many times as they want, without ever recording these transactions on the blockchain. What’s the point? All these updates are like “off-chain transactions” that require no fees nor block confirmation time. In this sense, the blockchain’s power is used not to record payments, but to be an arbiter between two parties while they agree on a final balance between them.

When the users are done updating their balance, they can settle their payment channel by signing an exit transaction. That signed transaction (the most recent one) will be broadcast to the network. Each party will receive the appropriate amount registered in their balance.

What makes it a network?

There is no need to open a new payment channel each time you want to transact with somebody new. Transactions on the Lightning Network are encrypted and routed from the sender to the receiver via intermediate nodes, using a tor-like onion routing protocol. Currently, the node TrueVision.club has the highest concentration of channels — 1103 (check updated stats here).

What does this mean? It means that Alice can send payments to Charlie without having to create a direct channel with him, as long as there is a network route between them that contains enough balance. For example, if Alice has an open payment channel with Bob, and Bob has a channel with Charlie, she can send the payment through Bob. Ideally, all network users are interconnected through only few nodes.

A visualization of the Lightning Network nodes and channels, courtesy of ACINQ

Nodes runners are incentivized by the small fees that users pay to make transactions using one of their connections.

In order to run an LN node, you must run a full Bitcoin node. The former is dependent on the latter. For instructions on how to carry out this process, you can refer to this video (or any of the many available online).

How can I use the Lightning Network?

In the interest of exemplifying the use of the Lightning Network for purchases, we will explain two use cases: access to the LN through BlueWallet (iOS or Android) and through Bitrefill.

Through BlueWallet, you can access online stores that connect to the Lightning Network. Select a store and item, and confirm that you will pay through the LN. A QR code will then be presented. Open your regular crypto wallet and scan the QR code to send the payment. In a matter of second (or less) you will receive confirmation that your order has been placed.

Through Bitrefill you have the option to pay for subscriptions, top up your phone, and more. Select a product from the available options and select payment through the Lightning Network. Again, open your wallet, scan the QR code, and send.

Note that in using products like BlueWallet and Bitrefill, you are transacting through the nodes they have set up. This illustrates the degree of centralization that the Lightning Network has. Read more about the controversy surrounding this below.

Popular Criticism Against the Lightning Network

The following have been pointed out as the Lightning Network’s main disadvantages:

On the Lightning Network, payment receivers must be online to get paid. Many regard this as a drawback.

The network is powered by many multi-signature wallets, and there is a very low chance that these will hold enough funds to act as intermediaries for large payments. Using the LN is not recommended to users that wish to send large amounts.

Many detractors have claimed the Lightning Network encourages centralization in payment hubs and even censorship. We discuss arguments and counterarguments below. 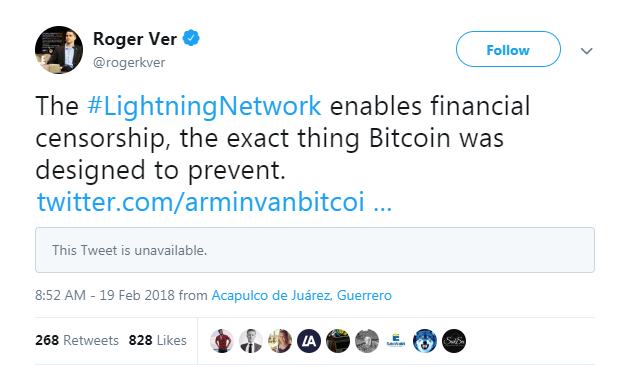 Another user clarified what Ver’s tweet is referring to. As it appears in the visualizations provided, Ver’s node is completely disconnected from the network (follow the thread to see a closeup). 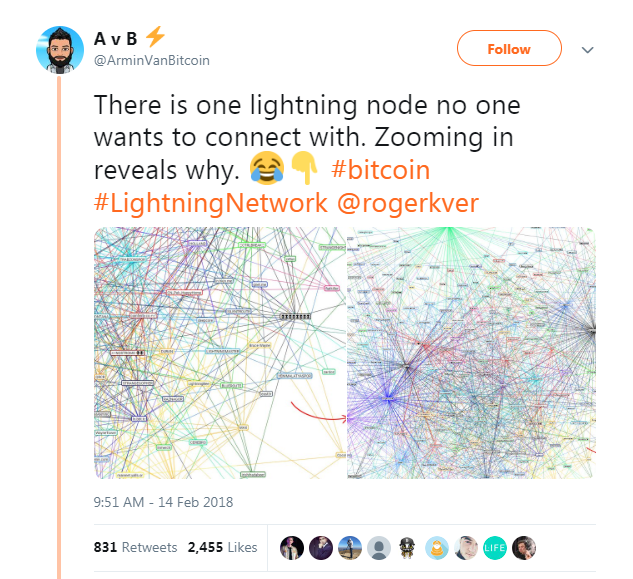 In this thread, user ArminvanBitcoin provides a visualization of the Lightning Network that shows Roger Ver’s node is not connected to anybody.

However, as a counterargument, the CTO of CasaHODL, Jameson Lopp, has responded: “If no one wants to voluntarily interact with you, that's not censorship...”

A heavier counterargument is that the network cannot admit censorship because payments are encrypted: no one can see where the money is coming from or where it’s going.

Is there a risk it could ruin Bitcoin?

Some have argued that the Lightning Network could harm, or even destroy, the Bitcoin mainnet (you can read a postulation of this argument here). Crypto billionaire, Erik Finmann, has tweeted a video where he claims Bitcoin is dead, and that the Lightning Network is, in part, responsible because it “turns Bitcoin into Visa and Mastercard, putting it in the hands of Silicon Valley.” This argument is closely connected to the centralization argument, which is perhaps the strongest of all the arguments against the network (or at least the most popular).

A common counterargument is that the Lightning Network is a layer-2 network: although it relies on the base blockchain layer, it does not affect it. The Lightning Network can “safely fail without any danger to Bitcoin as we know it”. This argument is expressed by one of the LN’s most enthusiastic defenders, YouTuber Ivan on Tech, here.

Is the Lightning Network Centralized?

There has been much debate surrounding the degree of centralization of the Lightning Network. LN detractors’ main argument is that the network will inevitably become centralized around hubs.

The image below represents a software engineer and moderator for Bitcoin Stack Exchange’s fears about LN centralization back in 2017. In the article, he specifies that the real network most probably resembles “at least a mixture between the "Decentralized" and "Distributed" topologies.” 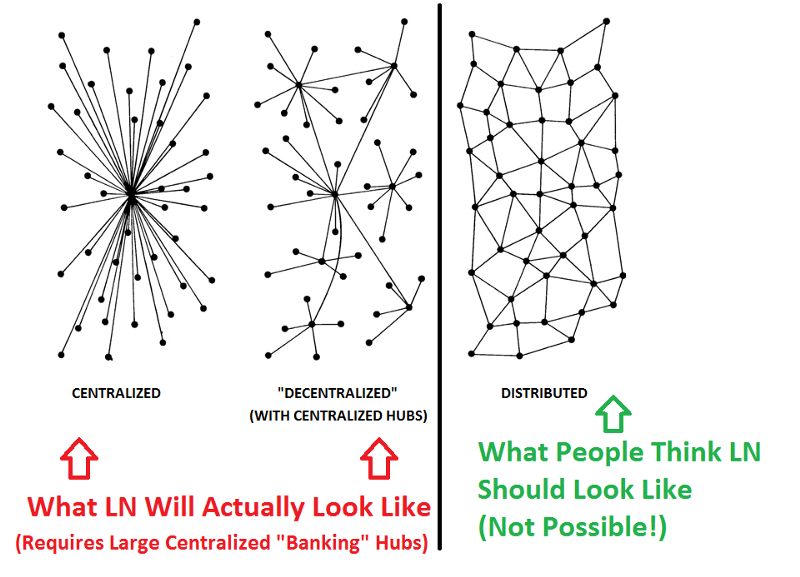 An interesting counterargument is that while the Lightning Network is admittedly centralized to some degree, “so is everything”. The main idea is that centralization is a spectrum, and although blockchain leans heavily towards the decentralized end, no blockchain project is absolutely, 100% decentralized. A healthy goal, therefore, would be to strive for the least amount of centralization possible.

To illustrate, YouTuber Ivan on Tech compares the centralization of the Lightning Network to that of other scalability solutions. In a nutshell, he believes that in order to achieve “Visa level transaction with Bitcoin,” the community has three options:

Notice that the key foundation that this argument is built on is that the community wants Bitcoin to achieve “Visa-level transactions.” This is an idea that people like Erik Finmann oppose. For others who think like him, Ivan’s argument is a moot point.

Peter R. Rizun, the chief scientist at Bitcoin Unlimited, has been outspoken (even called “inflammatory”) about his dislike of the Lightning Network as a scaling solution. Specifically, he has claimed that making blockchain “settlement-only” and having most transactions occur on the LN would eliminate p2p ecash as we know it, as users wouldn’t be able to "be their own banks (and) verify their own TXs." 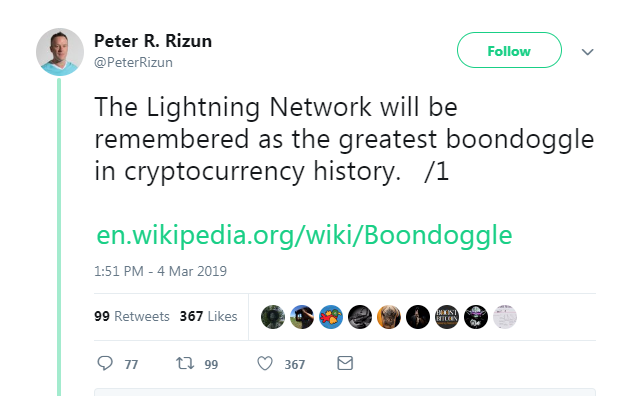 Peter Rizun, the chief scientist at Bitcoin Unlimited, is an outspoken critic of the Lightning Network

The Bitcoin twitter account recently accused Peter McCormack of silencing Rizun’s criticism after the crypto influencer rescinded an invitation to his podcast What Bitcoin Did. The episode will feature Pierre Rochard in Rizun’s place and has not yet aired at the time of writing. You can listen to it soon, here. 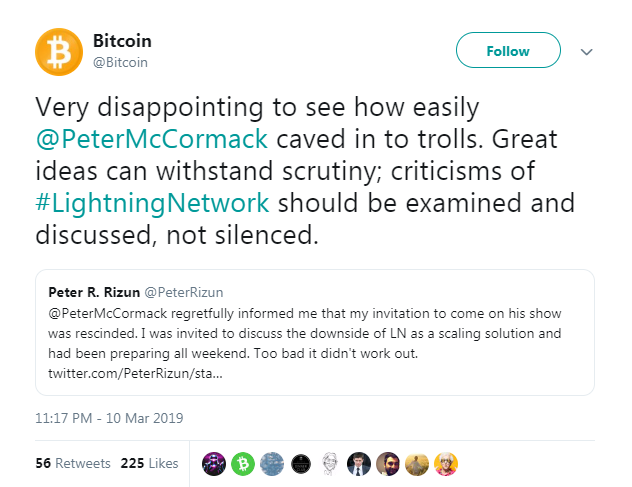 We hope our introduction to the Lightning Network was helpful and will encourage you to consult the recommended sources and more. As always, it is wise in any crypto debate to keep a sharp eye on technical developments and open ears to soundly justified arguments and counterarguments.

Thank you for reading, and have a great week,