The Bitcoin price has always been a lead story in the crypto space. As Google Trends show, the search query “Bitcoin price” reached its year peak so far at the end of June 2019. However, July has seen depreciation by 45%, which is probably caused by price correction.

Nonetheless, the Bitcoin price remains a hot topic in both the crypto and non-crypto media, and is often discussed in connection to major developments such as Facebook’s Libra, crypto regulation reinforcement, and booming institutional investment.

The following article is a comparison of the technical analysis of some indicators that are believed to highlight trends in the price of Bitcoin and expert opinions on where Bitcoin is headed next. Let’s see if they agree on following Bitcoin price trends or not. Which will you trust more: technical indicators or the suggestions of crypto professionals? No information presented here should be considered financial advice.

The golden cross on the three-day chart has proven to be a reliable, long-term bull market indicator in the past. The last time it occurred, in February 2016, it preceded the longest Bitcoin bull run of 2017 leading to the record high of $20k.

Golden crosses on the Bitcoin price charts in 2016 and 2019. Source: Tradingview.

Interestingly, the golden cross of 2016 occurred 6 months ahead of Bitcoin reward halving (the influence of Bitcoin halving on its price will be discussed in the following section). Now we are approximately 9 months ahead of the next Bitcoin halving scheduled for May 2020. The combination of these two factors might be a predictor of the next Bitcoin rally.

Created by Trace Mayer, a crypto entrepreneur, investor, and Bitcoin Knowledge Podcast host, the Mayer Multiple is a metric used to help identify speculative bubbles and moments of seller exhaustion.

The Mayer Multiple is a ratio of the current bitcoin price over a 200-day moving average, and is calculated as follows:

But not every Mayer Multiple value above 1 is a good sign for the Bitcoin price. When the indicator hits 2.4, Bitcoin is considered to be overvalued or overbought. Every time the Mayer Multiple has hit 2.4 (for example, during the bull runs of 2013 and 2017), it then returned to 1.5 and went lower. 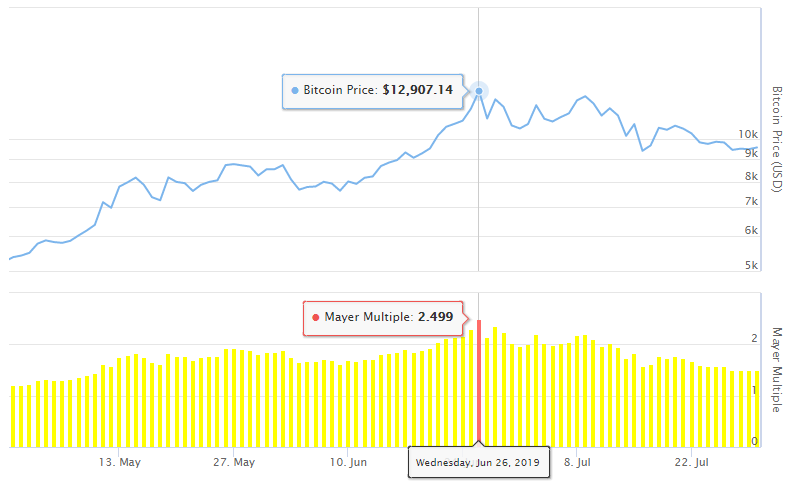 On June 26, 2019, the Mayer Multiple went over 2.4 for the first time this year. Soon after, the Bitcoin price corrected significantly. A few days before that, Trace Mayer published a potential scenarios table on his Twitter, based on Mayer Multiple calculations and historical context: 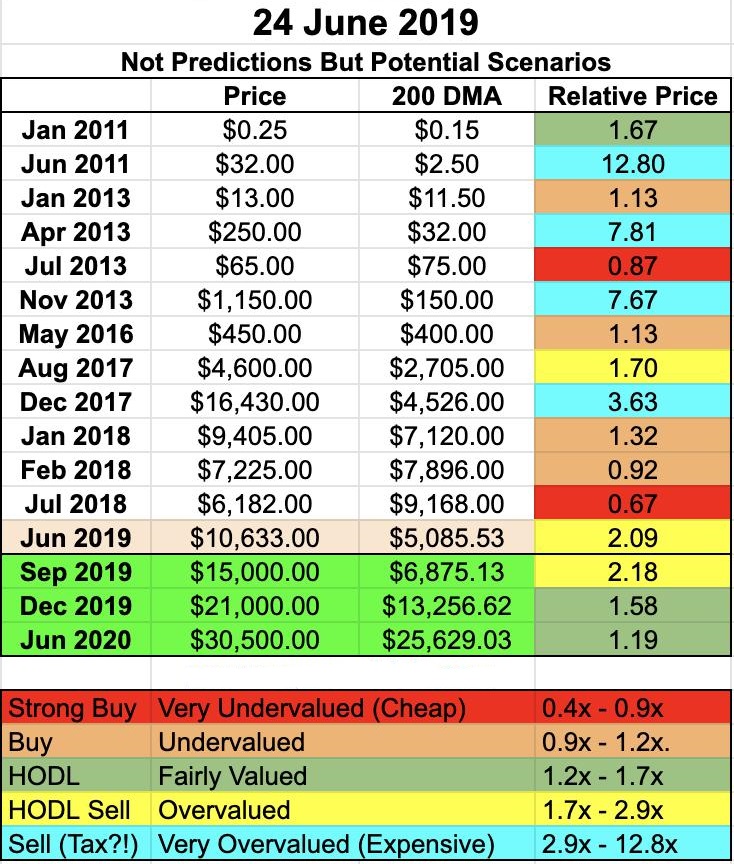 At press time, the Mayer Multiple is 1.56, which makes the Bitcoin price fairly valued according to Trace Mayer; 1 BTC is $9,946. The average Mayer Multiple since the creation of Bitcoin is 1.39. The Mayer Multiple has historically been higher than today's value 26.52% of the time.

Why is it so important and how does it influence the price? Halving lowers the supply of new bitcoins, and a lower supply usually leads to higher prices. At the moment, approximately 1,800 bitcoins are generated per day. After the halving, 6.25 bitcoins will be generated every 10 minutes, 37.5 per hour, 900 a day, which, at the current price, account for $9M a day and $270M a month.

Many experts are looking forward to the 2020 halving. As Barry Silbert, the Digital Currency Group founder and CEO, reminded listeners during an Inside the ICE House podcast, “each time that [halving] has happened in the past, the price of bitcoin has gone up by 500-1,000 percent afterward”.

When the MACD crosses above the signal line, it makes a bullish cross, and when it crosses below, it makes a bearish cross. The bearish cross in January 2018 indicated the beginning of the bear market; the Bitcoin price dropped from $17k to $6k back then.

A couple of weeks ago, on July 16, 2019, the MACD turned bearish on the three-day chart for the first time since December 2018. The price drop from almost $11k to $9.5k during the following days marked the price trend change.

The MACD indicator goes bearish for the first time since December 2018. Source: Tradingview.

As are the vast majority of indicators, the MACD is not 100% accurate. It can produce false signals when it indicates a possible reversal which doesn’t actually happen, or misses real price reversals. As always, it’s better to use the MACD only in conjunction with other indicators and signals.

In this section, we will observe the latest Bitcoin price predictions from noted crypto experts which have been put in order from the most skeptical to most optimistic. Remember that despite all their experience and market insights, experts do not possess precise knowledge of where Bitcoin is going, and the following opinions and predictions should not be considered as trading advice.

Tone Vays – $7k in the near future

Tone Vays, a trader, consultant, and content creator, revealed that he was very skeptical of the recent Bitcoin rally, as there was something that didn’t feel right to him. In his interview with IG TV, Vays reiterated that previous Bitcoin bull runs were always followed by 60-80% price depreciation, and expected the following correction. He notes $7k as a possible correction price, but claims that he wouldn’t be surprised if Bitcoin goes lower and touches its 2019 low of $3,500. 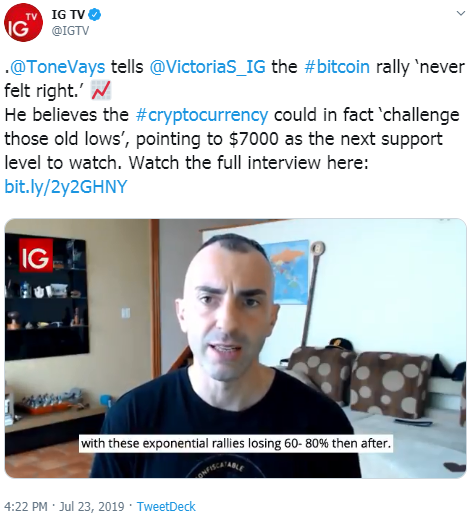 Michael Novogratz, the founder and CEO of Galaxy Digital, assumed that Bitcoin could probably reach $20,000 before the end of 2019, but more likely it would settle between $10k and $14k. During his interview with Bloomberg, Novogratz called Facebook’s Libra a game changer because thanks to it, global companies have started to believe that crypto could become a part of the future financial and crypto infrastructure. According to Novogratz, the push from institutional investors inspired by Libra among other things could help Bitcoin retest the all-time high of $20,000 by the end of the year or hopefully sooner. 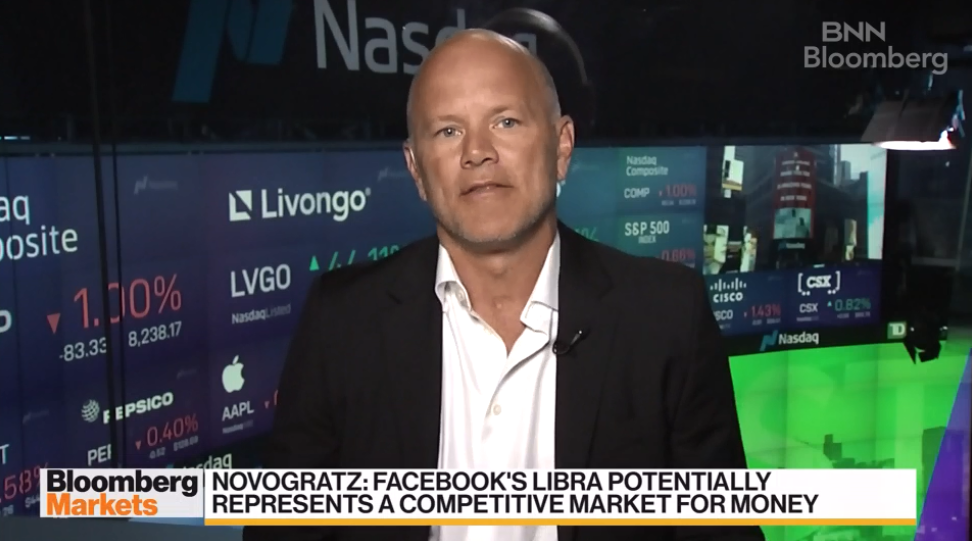 Mike Novogratz discussing Libra and the Bitcoin price on Bloomberg.

Naeem Aslam, ThinkMarkets chief market analyst and Forbes columnist, proposed that Bitcoin would easily cross the line of its all-time high and move further to reach $60k or even $100k. 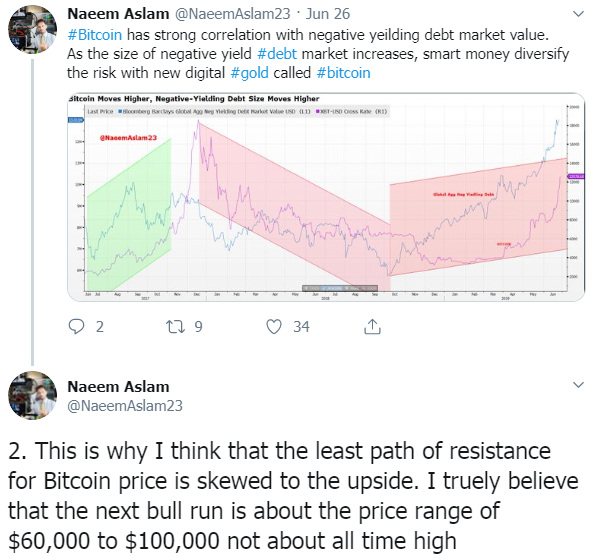 In his interview with Fox Business, Aslam claimed that on its way to $100k, Bitcoin needs to first break two important hurdles – $20k and $50k. The main driving forces of crypto momentum are, according to him, major enterprises like Facebook, Samsung, Amazon, and Apple entering the crypto space, and the maturity of the tokenization of digital assets.

Anthony Pompliano, the co-founder of Morgan Creek Digital Assets, agrees that Bitcoin will benefit from Libra being a “gateway drug” to other cryptocurrencies. Speaking on BloxLive.tv, he predicted that Bitcoin could hit $100,000 by the end of 2021. Pompliano says that Bitcoin will remain highly volatile, and there will be drops in price on the way to the top. He argues that the Bitcoin reward halving in May 2020 will become the main driving force for price appreciation.

Peter Brandt, a professional trader with 40 years of expertise, claimed in late June that Bitcoin was taking aim at $100,000.

Peter Brandt says that Bitcoin is aimed to hit $100k.

Though later, at the beginning of July, Brandt assumed that the trend had changed. According to him, a further major correction could amount to a staggering 80% of the total market cap, albeit “most of the damage of decline will occur to altcoins.”

John McAfee, a crypto enthusiast, and a possible US presidential candidate didn’t step back from his ambitious forecast of Bitcoin reaching $1M by the end of 2020. Instead, he confirmed that despite all the fluctuations and price falls in recent weeks, he was sure that his prediction would come true.

John McAfee claims that Bitcoin will reach $1M by the end of 2020.

For the time being, it’s probably the most famous Bitcoin price prediction in the world as too much is at stake: McAfee pledged to eat his private parts on national television if proved wrong. The anecdotic prognosis went viral, with jokes, memes and even a price prediction tracker.

A price prediction tracker comparing the Bitcoin real price dynamics with the one predicted by McAfee.

The Bitcoin price is extremely volatile, and, despite every effort to predict it, no one knows for sure where it is going next week, next month, or next year. Some of the indices and opinions in this article were quite optimistic, suggesting that the Bitcoin price could rise by hundreds of percents. Do not trust them too much, because, as Peter Brandt noted, “Bitcoin is a market like no other”. No expert and no indices can predict the movement of the Bitcoin price exactly and precisely. Modeling future prices could be exciting but using these assumptions in trading might be risky, so remember not to invest more than you are ready to lose.