Yesterday, on September 23rd, the Bitcoin network hash rate suddenly showed a sharp 40% decline, which is evident in the graph below. COIN360 asked the representatives of the Bitcoin mining industry and crypto community to explain the reasons behind the sudden dive, which happened just a week after Bitcoin’s hash rate hit a record 90 exahashes per second.

The Chief Information Officer for the Bitfury Group, Alex Petrov, suggested that the sharp decline shown on the graphs is mainly caused by the imprecision of the collected data:

“The search for the solution is always a matter of chance, a possibility, sometimes you get more luck, sometimes less,'' he added.

Filipp Modnov, CEO of LAZM mining data processing center, explained that during recent months the BTC price was mainly stagnating while the difficulty of mining increased by 60%-70%. Meanwhile, the electricity costs in several regions also increased, causing some miners to leave or forcing them to prepare for a switch to more modern equipment.

Some members of the Twitter community suggested that the recent drop in computing power was caused by mining crackdowns in Central Asian countries:

Meanwhile, others tend to think that the recent fluctuations are just variance 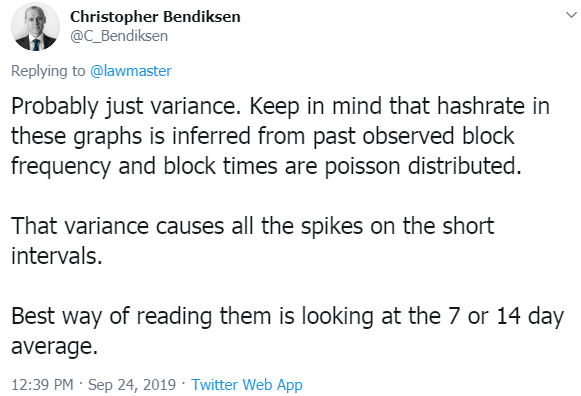