Block.one released version 2.0 of EOSIO protocol that consists of four major updates for developers that build on the EOS blockchain. 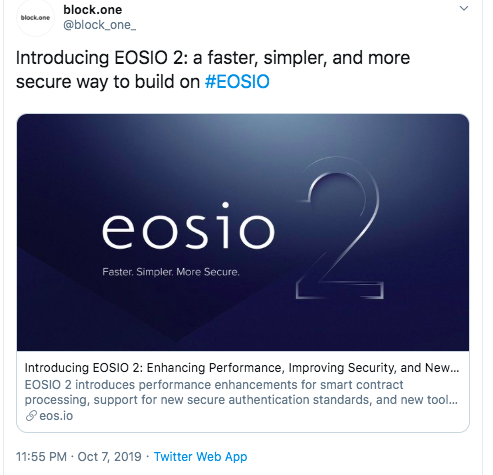 According to the company blog, “the single biggest bottleneck for blockchain development is the speed in which they can execute smart contracts”. For that, the developers are offering EOS VM, the new purpose-built blockchain WASM engine that “runs the EOS Mechanics WASM CPU benchmarks up to 16x faster” than a previous version.

For developers that are coding on EOSIO for the first time, the team is now offering the
Quickstart Web IDE – “a development tool that allows new developers to go from start to ready-to-build in minutes.”

The third update, WebAuthn Support, the authentication standard with a focus on private keys security designed in collaboration with World Wide Web Consortium (W3C), the Fast Identity Online (FIDO) Alliance, and help from Google, Mozilla, Microsoft, Yubico, and others, aims to add security for end users. With WebAuthn Support, users will not need any browser extensions or software and will be able to use hardware devices for authenticating and signing transactions.

Finally, the company also introduced the Weighted Threshold Multi-Signature Block Production Support for “a secure way for block producers to use different keys to sign blocks on primary and backup block production hardware.”

As COIN360 reported earlier, in September Block.one also executed a hardfork, which EOS Nation, one of the vivid Block Producers, says was the “largest software upgrade in their history”.