June 06  |  12 min read
Blockstream: Developing Bitcoin or Taking It Over?

Blockstream: Developing Bitcoin or Taking It Over?

Founded in 2014, Blockstream has become a prominent figure in the Bitcoin ecosystem. This Bitcoin development company was supported by venture capital firms Horizons Ventures and Mosaic Ventures, and managed to raise around $80M in fundings. The company was co-founded by well-known Bitcoin developers: Adam Back, Gregory Maxwell, Matt Corallo, and others. They created Blockstream as they were not satisfied with Bitcoin’s conservative pace of development and wanted to encourage it. At the moment, Blockstream offers a number of innovative products and technologies which bring improved scalability, privacy and security to the Bitcoin blockchain.

On the other hand, some say that the Blockstream team now fully controls Bitcoin, making it centralized and trying to benefit from newer implementations, such as sidechains. In this article, we are going to review the Blockstream products and technologies, learn their latest development news, and look at the history of Blockstream controversies.

Liquid was announced back in 2015, but it was finally launched only in October 2018. In a nutshell, Liquid is a network which enables faster and more secure Bitcoin transactions for cryptocurrency exchanges and institutions. A total of 35 Liquid members, including the largest exchanges, financial institutions, and trading desks (Bitfinex, Bitmax, Bitso, Blue Fire Capital, BTCBOX, Coinone, DMM Japan, FRNT Financial, Gate.io, Huobi, L2B Global, OKCoin, and others) run hardware to secure the network.

Liquid is an example of using Elements technology, an open source, sidechain-capable blockchain platform. Liquid’s sidechain supports the 1-to-1 exchange of Bitcoin between chains. While a certain Bitcoin amount is locked on the main chain, the exact same amount of Liquid Bitcoin (L-BTC) is issued on the Liquid Network. These coins are transferred (Blockstream claims that it takes no more than 2 minutes to fully complete a transaction) and can be redeemed on the Bitcoin main chain.

Unlike Bitcoin, which is secured by Proof-of-Work, Liquid is secured by the Federation of trusted functionaries. Blockstream claims that this allows Liquid transactions to be completed faster and more reliably, but not everyone in the community was delighted with this solution. This user on Twitter noted some interesting details in the Liquid FAQ: 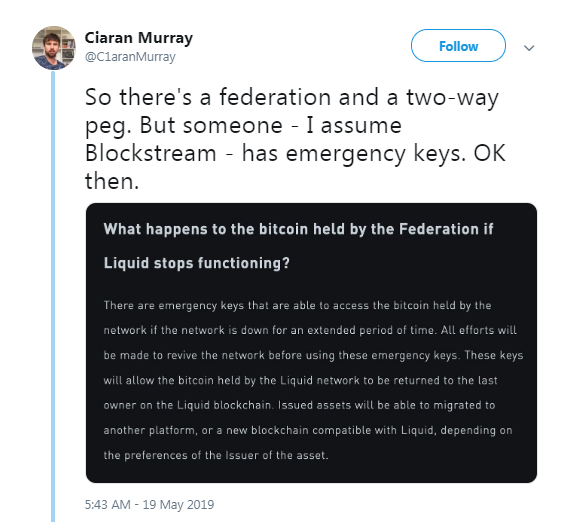 These “emergency keys” were interpreted as a backdoor for Blockstream to move anyone’s coins at any time and were hotly debated. In this Reddit thread, Liquid supporters tried to explain that the emergency keys could be only used to move other people’s coins if the network is down for 4 weeks, and nobody uses the Liquid currency. Anyway, for many people, it was a red flag, as they preferred decentralized systems.

Blockstream Satellite is designed to bring Bitcoin transactions to the whole planet including remote areas with poor Internet connection. The satellite network consists of 5 satellites covering North and South America, Africa, Europe, and Asia. The network also includes so-called “teleports”, ground stations which transmit blocks to the satellites. The satellites receive signals from the teleports and broadcast them across the world. Anyone in the coverage area can run and synchronize their node with a small satellite antenna and a USB receiver.

For a more complete picture of Blockstream Satellite, read our summary of Adam Back’s AmA on the topic here.

While some users were excited about the opportunity, including the ability “to send immutable news to oppressed and authoritarian areas”, others were not delighted. They said that Blockstream used Satellite as a cheap and easy propaganda move, and the service is totally useless as there’s zero market for it. In addition, more questions on centralization and censorship arose:

c-Lighnting, which is Blockstream’s own implementation of the Lightning protocol, was actually the first to launch on the Lightning mainnet in February 2018. Users’ opinions seemed quite controversial:

On Mar. 1, 2019, the latest c-Lightning 0.7 was released. In addition to bug fixes and performance enhancements, it brought some new features. For example, the plugins which allow developers to add their own applications written in any language to Lightning, the routeboost, to send and receive payments over non-public channels, and data loss protection, which is now enabled by default.

On May 15 at Consensus 2019, Blockstream revealed their plans to launch a new Liquid Securities platform. The platform aims to solve two main challenges in issuing securities:

Liquid Securities claims that it will allow businesses to issue Liquid-based security tokens with the click of a button, manage issued tokens, expand their supply, and establish rulesets to comply with regulatory requirements. In contrast to other blockchains, where token rules are written at the smart contract level, securities on Liquid will be easily configurable through the web interface or API. Users will be able to set who can trade their securities and when, and build rulesets that can be quickly adapted to regulatory changes.

The platform hasn’t been launched yet, and companies wishing to get early access should contact the Blockstream sales team, or join the waiting list. Five companies have already partnered up with Blockstream to pioneer tokenized securities use cases on Liquid: BnkToTheFuture, TokenSoft, Atomic Capital, Zenus Bank, and Pixelmatic. The latter is a game studio led by Samson Mow, who is also the CSO at Blockstream.

In addition to the controversies mentioned in previous sections which refer to certain Blockstream products, there are also some issues which relate to Blockstream in general.

It’s long been rumored that Bitcoin had been hijacked and taken over by Blockstream. For example, a crypto enthusiast provided a huge list of evidence in this Reddit thread.

It all started in 2015 when many users faced censorship on /r/Bitcoin. A moderator with the pseudonym Theymos was continuously deleting all discussions on increasing the Bitcoin block size limit of 1 MB. This limit was added to the code by Satoshi Nakamoto himself back in 2010, but it was just a temporary anti-spam measure. Later, many developers and enthusiasts started discussing the opportunity of increasing the limit. The limit affected the Bitcoin transaction speed, and its increase would increase the transaction processing capabilities. There were a lot of arguments opposing the idea of increasing the block size, and it raised heated debate. For example, many users were against hard-forking as it was a huge risk, and against faster and cheap transactions, as it could spam the network. But it was forbidden to bring up these topics on /r/Bitcoin, and some Blockstream top figures including the CEO, Adam Back, supported the prohibition: 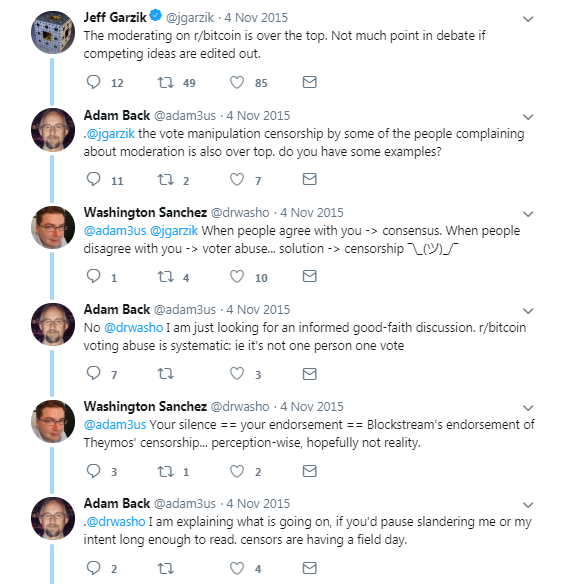 Adam Back supports moderation on /r/Bitcoin.

The connection between Theymos and Blockstream was found later. Theymos hired an unknown developer firm with a monthly fee of $100k to build new forum software. One of the firm employees was Warren Togami, who was also the Technical Project Manager at Blockstream. Many suspected money laundering, you can read more about it here. Since then, posts with theories of Blockstream controlling Bitcoin began to appear. Redditors claimed that Blockstream artificially kept the block size limit low to push users off the Bitcoin blockchain to sidechains, which could process faster transactions. The motivation of this was that Blockstream could develop sidechains and generate revenue from subscriptions, transaction fees and consulting. According to detractors, Blockstream was not interested in the mass adoption of Bitcoin and making it a success as a currency and means of payment, they just wanted to extract fees from the system without mining.

Despite the fact that discussions on increasing the Bitcoin block size were being banned on /r/Bitcoin, a group of Bitcoin activists managed to create a hardfork, which is now known as Bitcoin Cash, in summer 2017. The two communities aren’t on good terms with each other, with Bitcoin Cash supporters claiming that BCH is the only true Bitcoin, and Blockstream developers calling Roger Ver (the strongest Bitcoin Cash supporter) a scammer. /r/btc has now got around 254k members, while /r/Bitcoin has over 1 million. And, as you know, Bitcoin Cash is still far from reaching the heights of its famous predecessor. Though it’s been performing rather well recently and holds the #4 position in terms of market cap.

In November 2018, it was reported that the co-founder and former CTO at Blockstream, Gregory Maxwell, wrote a letter to Craig Wright, who is best known for claiming that he is Satoshi Nakamoto. Some believed that the letter (screenshot here) was supportive, and one of the news media even claimed that Greg Maxwell offered Craig Wright his assistance and changed his mind on Bitcoin SV, admitting that it is the only real Bitcoin.

Most of the community didn’t take this seriously and suspected it to be fake. Here’s how Jihan Wu, the co-founder of Bitmain, responded to this: 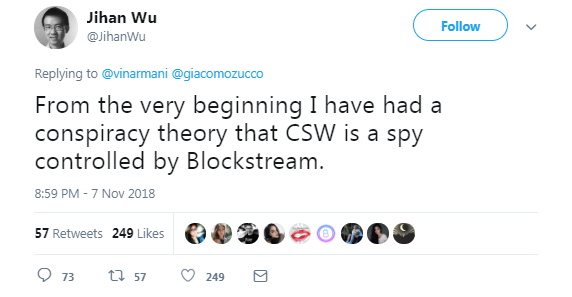 The reaction of Greg Maxwell was unequivocal:

In other news, the Blockstream CEO, Adam Back (who was, by the way, cited in Bitcoin’s white paper for his hashcash protocol), claimed (watch from 7:17) that he was unaware of a person hiding under the pseudonym of Satoshi Nakamoto. However, he stated that Satoshi was an individual, not a group of developers, because of the “continuity in coding and writing style” and because it’s difficult to keep secrets when a group of people is involved.

Matt Corallo, a long-time Bitcoin developer, revealed on Twitter that he felt embarrassed about co-founding Blockstream. He claimed that the Bitcoin community was getting toxic, and blocked one of the ideologists of this toxic behavior, Samson Mow (@Excellion on Twitter), the CSO at Blockstream. Corallo blames Blockstream employees and management for “being mean just because it’s fun” and making the Bitcoin community totally unwelcoming and rude. 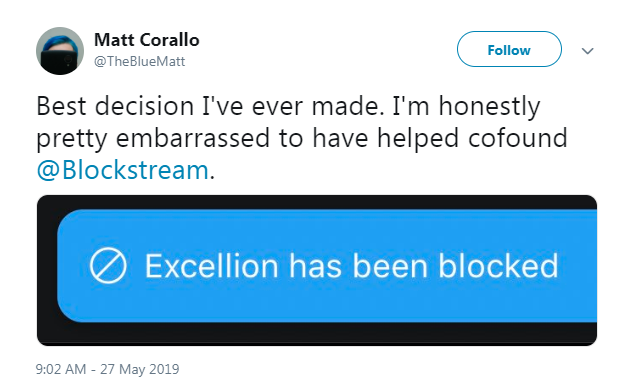 According to Corallo, trolling and arrogance lead to certain problems. First, this type of behavior is associated with the Bitcoin community on Twitter, and it often turns people who came there to learn off. Second, the community has already lost some talented people who have moved to other projects:

Developers turned to ETH because of the unfriendly community.

In response, Samson Mow said that Corallo was being too dramatic. He also claimed that he preferred the community with open arguments, not the one where people are nice in public, but try to silence and even fire those who express dissenting opinions. 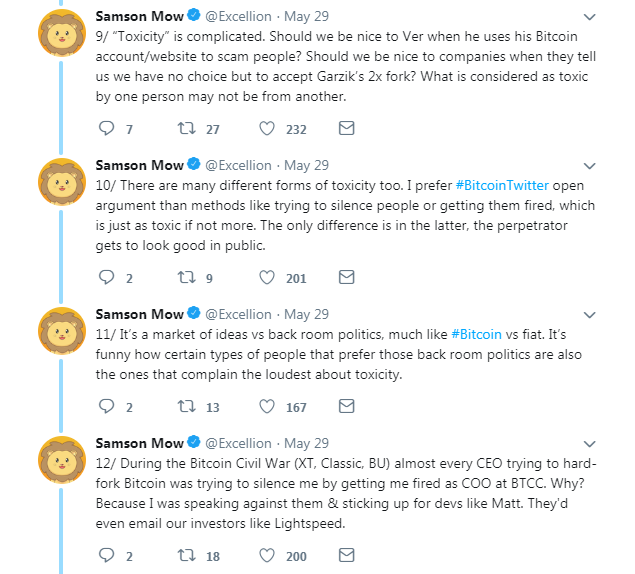 It’s hard to argue that Blockstream isn’t a very important player in the Bitcoin game now. Cutting-edge developments including Satellite, which allows Bitcoin transactions with no internet connection needed, a highly professional team of Bitcoin devs, and the intention of making Bitcoin better — that’s what makes Blockstream one of the drivers of innovation. But what if some old gossip is true, and Blockstream is just trying to make profit out of the Bitcoin network, and is taking over Bitcoin to implement only those features which are convenient to them? Perhaps this gossip could sound like a conspiracy theory, but only time will tell whether Blockstream helps Bitcoin evolve and flourish, or ruins the first and largest blockchain.