Cisco and SingularityNET Are to Build Advanced AI on Blockchain

Technological giant Cisco and SingularityNET have started to collaborate on a decentralized AI project with the goal of making “artificial general intelligence” real and commercially viable, according to the startup announcement. The SingularityNET blockchain network will serve as a host of the advanced AGI project. 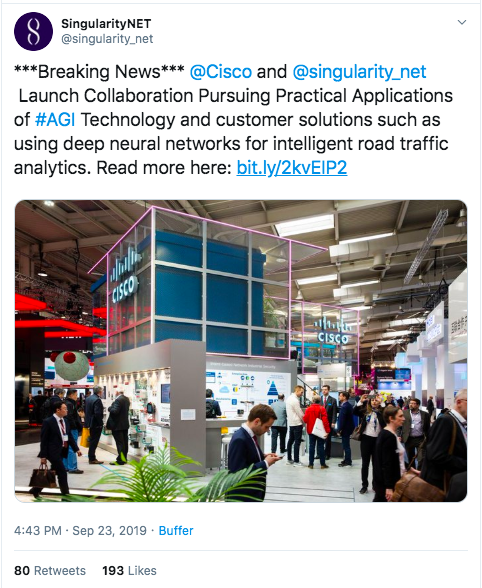 Artificial General Intelligence is an emerging field of advanced AI research that explores ways of making machines human-like by imbuing them with the intellectual ability to grasp information on general concepts. The companies have expressed a mutual desire to build such a system in the near future and the technology is “expected to provide tremendous commercial benefit to whoever develops it.”

Hugo Latapie, a principal engineer at Cisco’s Chief Technology and Architecture Office, shared that the company believes in the feasibility of the project and is actively looking at ways to explore it:

“This is real, it’s functioning, and we’re actually looking at deploying this.”

SingularityNET’s founder and CEO Ben Goertzel shared that in order to build such a system they are going to have to “put a lot of complicated ingredients together, and the collaboration between Cisco and SingularityNET has the potential to accelerate things tremendously”:

“The work we’ve done with Cisco on smart traffic analytics using OpenCog’s logical reasoning and deep neural networks just scratches the surface. Let’s just say we have some much broader and deeper conversations going on.”

According to Ben Goertzel, the project could deliver results in the near future:

“We’re going to see AGI elements coming into play this year. Within the next couple of years, you’ll start to see tremendously intelligent agents that start to really solve some of the problems that we’re having.”