Crypto Collaborations to Watch in 2019

Many companies from outside of the crypto sphere have become interested in blockchain in the past couple of years. Though most businesses focus on what distributed ledgers can do to streamline production or facilitate cross-border payments, many have also capitalized on the benefits of partnering with a cryptocurrency company.

Not only can this be a positive deal for mainstream businesses; more often than cryptocurrencies are able to reap the benefits as well, with public recognition increasing and price surges that can exceed 100%.

The following are some crypto partnerships that investors and holders may want to keep an eye on.

Samsung is officially among the first manufacturers to create a smartphone with built-in cryptocurrency storage. The Galaxy S10, launched in early April 2019, contains a crypto wallet that stores Ethereum (ETH), Enjin Coin (ENJ), and the new Cosmo Coin (COSM), native to a South Korean beauty dapp called Cosmee, available on the phone. The Galaxy S10 supports other select dapps as well. Although support for Bitcoin (BTC) was hinted at in public announcements, it has not yet been enabled.

Online rumors concerning a supposed partnership between Samsung and Enjin made the gaming coin's price grow from $0.044 on Feb. 25, 2019, to a peak of $0,242 on Mar. 9. This peak was a direct consequence of Korean media's confirmation of the rumors (here). On Mar. 8, when asked to comment, Enjin’s VP of marketing, Simon Kertonegoro, said “While I can confirm that we have an official partnership with Samsung, I’m not at liberty to disclose any other information at this point.” 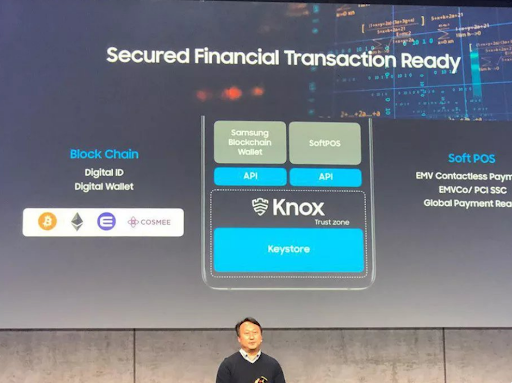 Samsung unveiling features of the Galaxy S10 at the 2019 Mobile World Congress.

In retrospect, it's clear that the term "partnership" was a stretch on Enjin's part. The Galaxy S10 merely offers support, same as it does for BTC and ETH. This bit of misrepresentation, however, did not prevent Enjin Coin from getting its hands on some of the gains. At press time, ENJ is trading at $0.133, around triple what it was before the rumors began. Enjin Coin is an ERC-1155 token used for minting, storing and trading cross-platform, in-game items. The company hopes to create a brand new e-commerce ecosystem.

Cosmo Coin, on the other hand, reached its highest price ever on Mar. 9, at $0.073. The coin is still riding on the high of the Samsung announcement, but has simmered down to a mild $0.023 at press time.

Regarding the Galaxy S10, the device starts at $899.99 and has received high praise, considered “better than the Pixel in virtually every respect (other than software updates and night photography)” by The Verge (here). Samsung also said it would support contactless payments using cryptocurrency.

As for Enjin, you may want to keep an eye on them; the media is abuzz about their newly announced blockchain SDK for Unity.

A Quiet Partnership: Oracle, and Steemit and TRON (TRX)

Justin Sun’s TRON is no stranger to partnerships, as attested to by the dearth that have occured in his tenure with TRON. At the niTRON summit in San Francisco in January 2019, the crypto company also confirmed new partnerships with Oracle and Steemit, among others. The problem is very little concrete information has actually been shared. Nobody is quite sure what the “partnerships” imply. 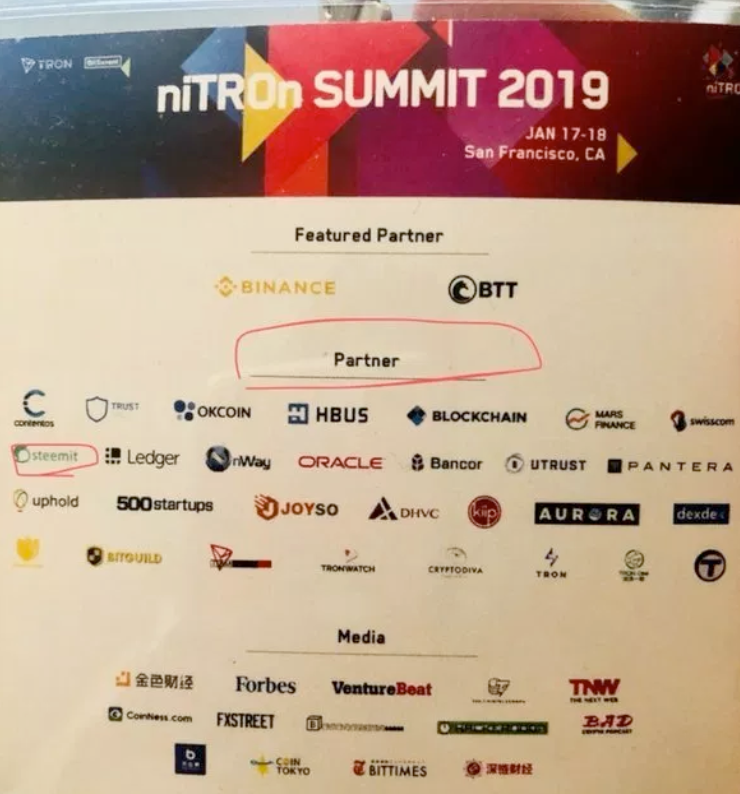 Picture shared by a participant at niTRON Summit.

Oracle is an US-based multinational database company. They actually have their own blockchain, which supports Oracle Blockchain Cloud Service and links to the Oracle Supply Chain Management (SCM) Cloud, Oracle Enterprise Resource Planning (ERP) Cloud and other Oracle Cloud Applications. They have not, however, issued their own public cryptocurrency. According to Sun, a meeting was held to discuss partnership opportunities, tokenization and smart contracts.

Steemit is a popular blogging and social media platform that incorporated its own cryptocurrency, Steem (STEEM), used to reward users for curating and publishing content. Steem’s price was not noticeably affected by the partnership announcement at niTRON, and the coin is currently valued at $0.312.

The IOTA Foundation has been known to forge partnerships with big-name brands before; they even have a bit of a reputation for being loose with their definition of the term “partnership” where it can be used to their advantage. In 2017, IOTA boasted of deals with Bosch, Accenture, Deutsche Telekom, and even Microsoft, as part of a plan to launch its own Data Marketplace for the Internet of Things. As it turned out, Microsoft did not quite agree with the way the media was characterizing their "partnership" with the blockchain firm; the tech giant confirmed that “IOTA is a Microsoft Azure customer and plans to use Azure to test and deploy its Data​ ​Marketplace,” but denied that they viewed this as a partnership at all (read a report here). After the initial announcement, IOTA's price gained over 500%, from around $0.8 in mid November, to a peak of $5.23 on Dec. 19, 2017. In the year and five months that have elapsed, IOTA's lost all it gained through the announcement, and even sunk lower than where they started from.

Perhaps for this reason, the IOTA Foundation announced a partnership with Jaguar Land Rover, Britain’s largest auto manufacturer, a week ago.

According to details shared by CNBC (full report here), Jaguar is developing a smart wallet with crypto deposit integration that will be installed into cars. Additionally, drivers will supposedly be able to earn IOTA as they drive, by sharing traffic-related information with navigation providers, traffic authorities, and others. A reward-driven ride-sharing program is even being contemplated for the future. "The tokens earned could be used to pay for tolls, parking and charging for electric cars," says CNBC. You can watch Jaguar’s promotional video here.

This new tech is being tested at the Jaguar Land Rover software engineering base in Shannon, Ireland. Reportedly, several vehicles, including the Jaguar F-PACE and Range Rover Velar, have been equipped with the wallet. There's no word yet on a commercial release date. 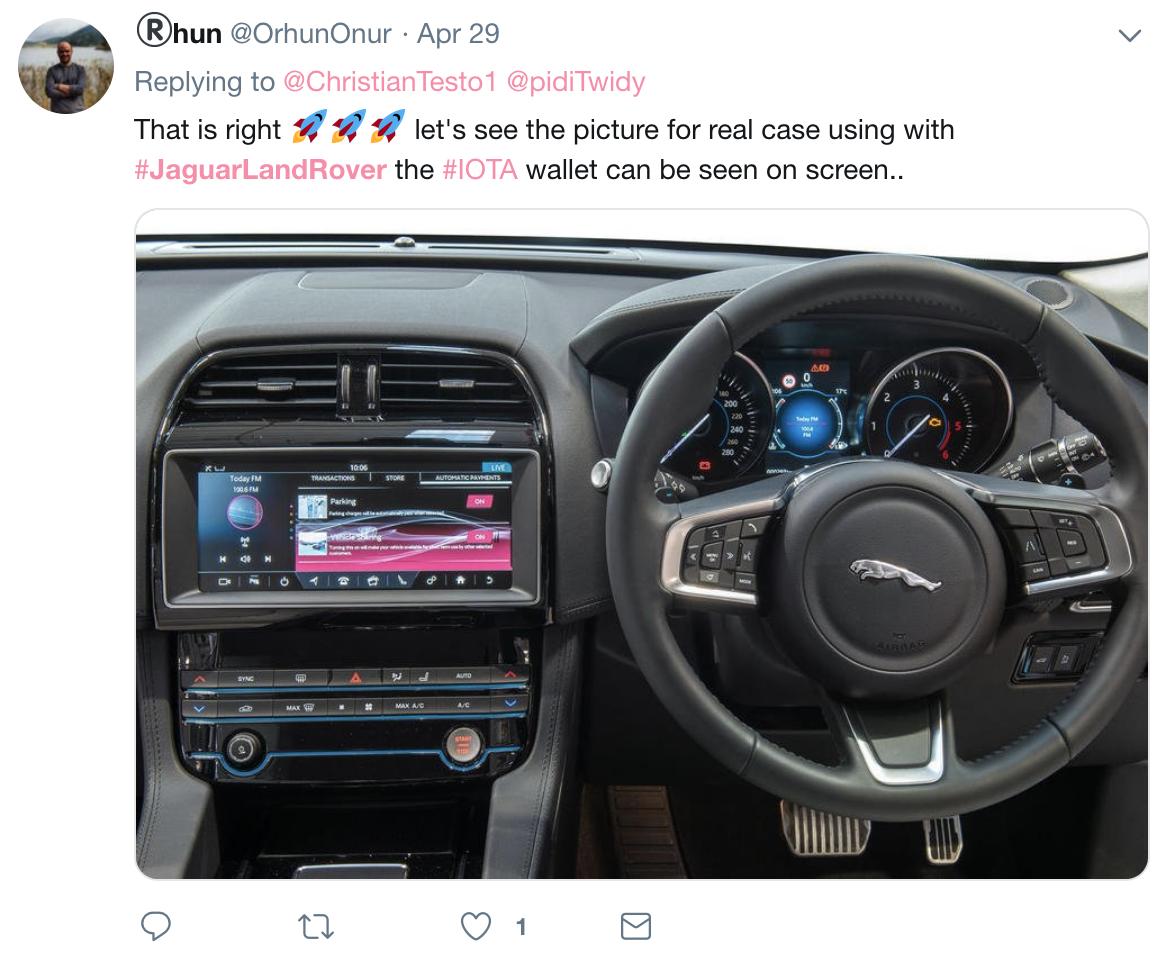 The first Jaguar Land Rovers have already been fitted with the IOTA smart wallet.

Immediately following the announcement, on Apr 28., IOTA's price climbed from $0.270 to a peak $0.323 the following day. Certainly not comparable to the surge the Microsoft announcement afforded them in 2017, and not really a sustainable surge either — at press time, IOTA is trading at $0.291.

The most recent developments of their collaboration made waves just a couple of months ago. On Mar. 18, 2019, IBM announced the official launch of the project. It’s called World Wire, and it is a real-time global payments system built on the Stellar blockchain.

World Wire currently supports 47 currencies in 72 countries,and six banks have already signed letters of intent to use the network (only Filipino RCBC, Brazilian Banco Bradesco and South Korean Bank Busan have been named).

The partnership with IBM raised the value of XLM from $0.108 to $0.118 within the day of the announcement (even a partnership with computing mammoth IBM couldn’t work miracles for Stellar’s price, apparently).

Stellar is the ninth biggest coin by market cap, and is valued at $0.0909 at press time.

It’s practically a guarantee that a partnership with a good enough brand can boost any cryptocurrency, at least enough to see a brief spike. The surge in price can come as soon as the mere announcement that a partnership is in the works.

On Jan. 1 2019, Monero tweeted that Fortnite’s merchandise store, Retail Row, was accepting the privacy-based cryptocurrency as payment, thanks to Epic Games’s partnership with GloBee, the cryptocurrency payments service for retailers. 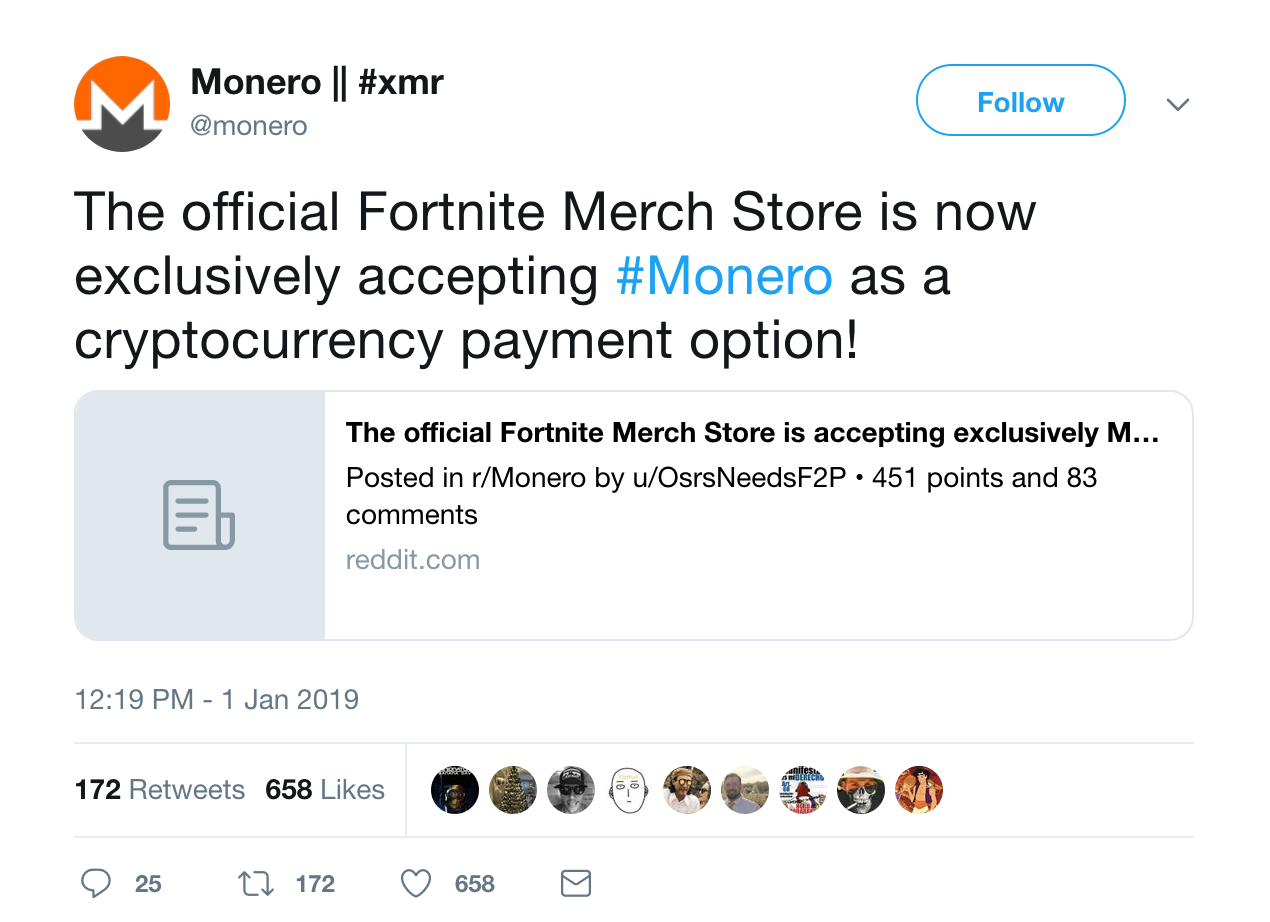 Monero announcing a collaboration with Fortnite.

This would represent a massive deal for Monero, since Fortnite claims to have 125 million players globally, a number that propelled Epic Games to a valuation of $15 billion in October 2018.

However, the story was not over yet. Epic Games CEO Tim Sweeney took to twitter on Feb. 5 to clarify that there was no official partnership; Monero was in fact briefly accepted as payment on Retail Row — but only briefly, and by accident. 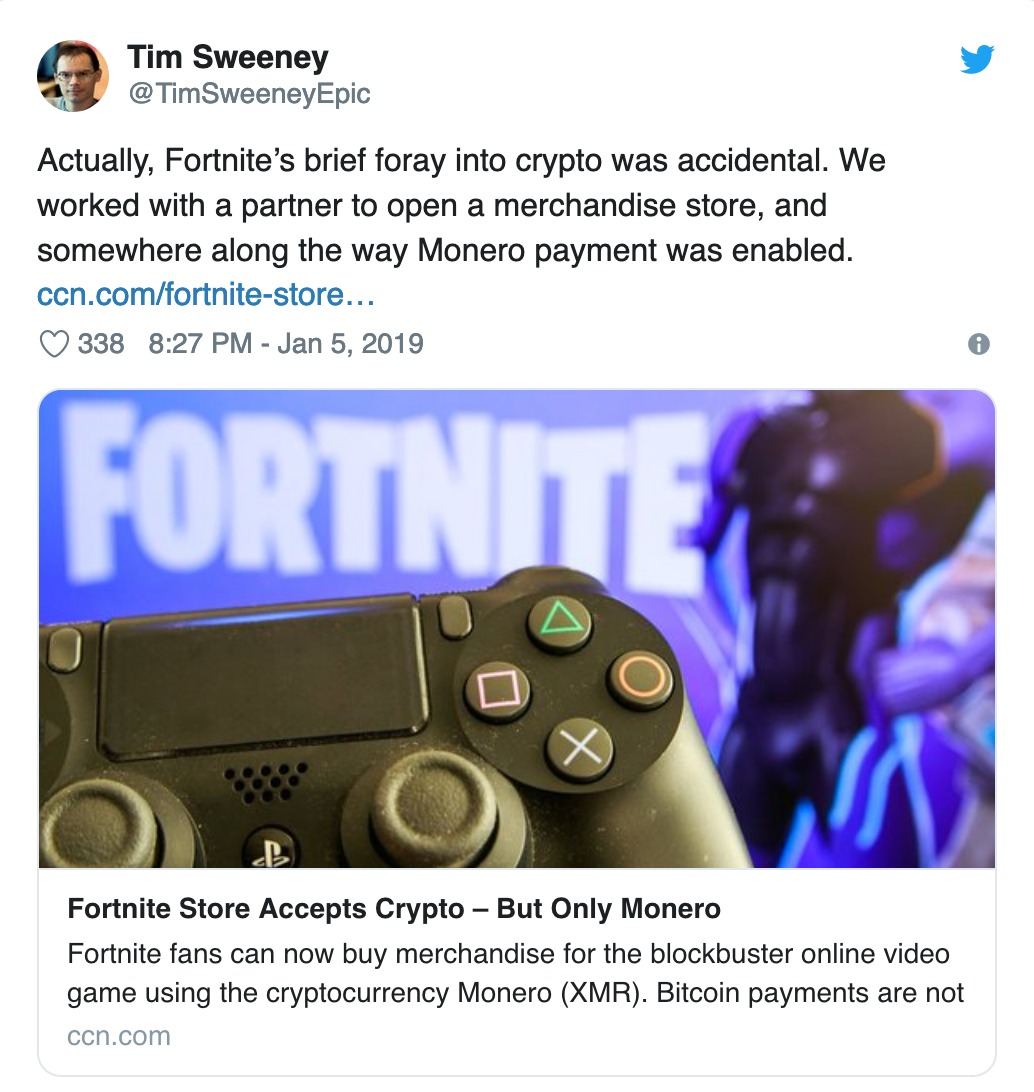 Since Epic Games is in fact interested in working with crypto eventually, there is speculation as to whether the brief addition of Monero as a payment option was indeed accidental at all. For now, Sweeney has denied any crypto partnerships whatsoever. As for Monero, the privacy altcoin is trading at $66.75. 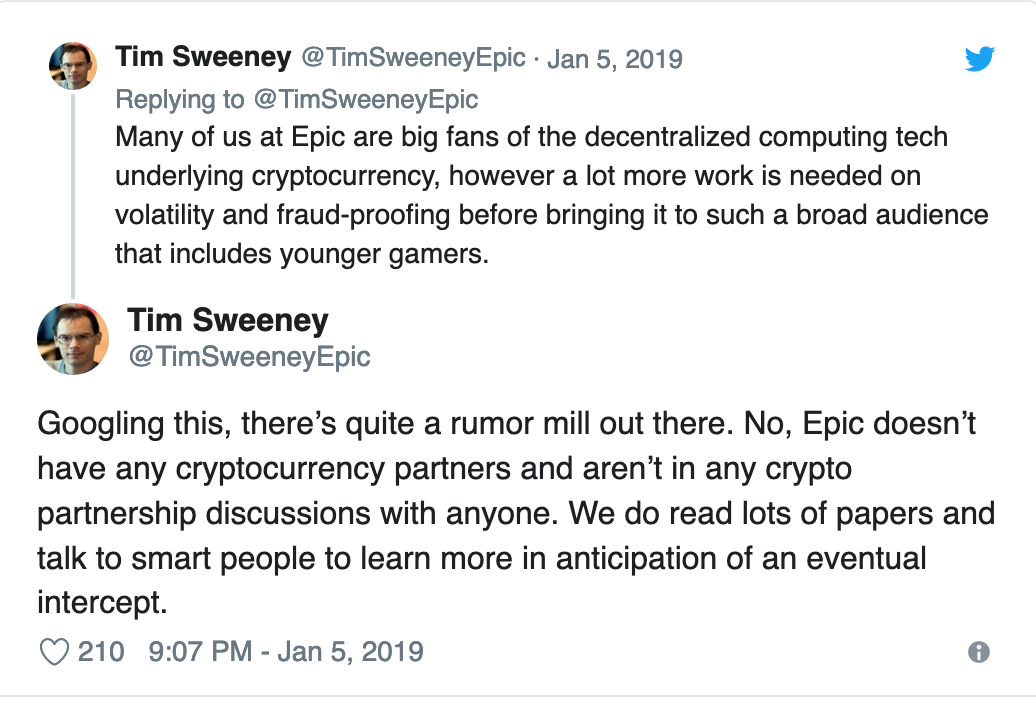 Some have expressed the opinion that the growing phenomenon of crypto partnerships with mainstream businesses is the silver lining of the bear market: in the past few months, cryptocurrency prices have been moving in a tight range, giving businesses and institutional players the necessary confidence to dive in.

Partnerships are not only a good opportunity to invest in crypto, but a stepping stone towards real adoption.