DeFi: a Crypto Cure for Finance?

DeFi, short for Decentralized Finance, has been widely debated not only in the crypto community but also in the traditional financial industry for over six months now. Even the traditional media have covered DeFi in their articles, and a Forbes article only added fuel to the fire, triggering much discussion. The following summary is going to explain the DeFi phenomenon, describe its applications, provide details of lending and borrowing on the blockchain, highlight the benefits and risks, and review opinions from the community.

In a nutshell, DeFi is an attempt to recreate traditional financial instruments using blockchain technology with all its decentralization, transparency, and absence of censorship or government control.

Decentralized Finance was designed as an open community of decentralized finance platforms, and it welcomes new members. Projects seeking membership should meet the following guidelines:

Here are some current DeFi members: 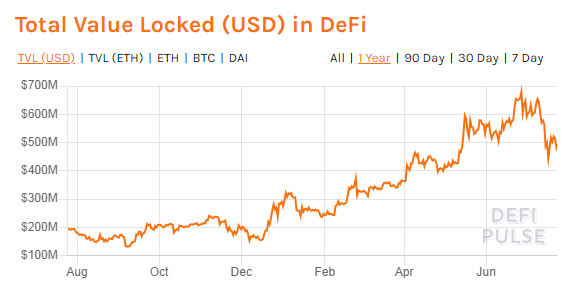 The total locked value shows the amount of crypto which has been locked as collateral on DeFi platforms. When the rate increases, it means that more users hope to make money on the rise of the price of cryptocurrency.

Maker is a platform that allows users to take loans in the stablecoin DAI, locking up their crypto as collateral and paying interest. DAI is pegged to USD. DAI combines the advantages of cryptocurrency with the lack of volatility. If you are worried about crypto market instability and are waiting for the price of ETH to rise, you can borrow DAI, lock up your ETH and wait out the storm without getting rid of your crypto permanently. DAI can also be used as a normal cryptocurrency: it can be traded, exchanged, and be used as a payment method. 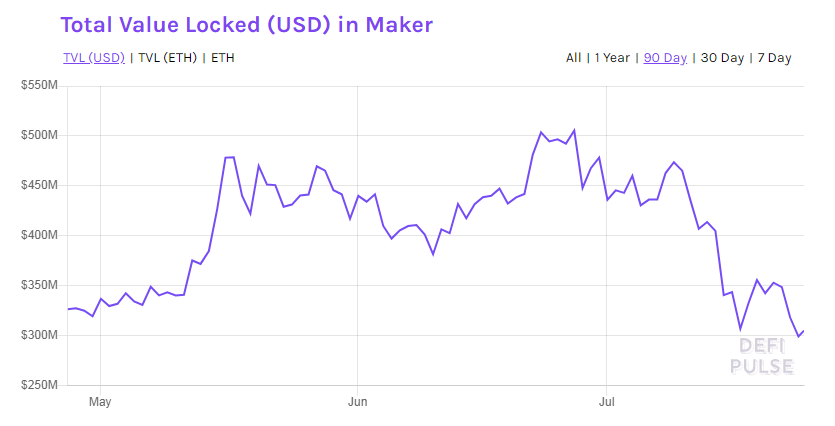 The total value locked in Maker.

The total value of ETH locked in Maker is over $300M at press time, which indicates Maker’s almost 65% dominance in the market. It’s worth noting that just 6 months ago Maker was at almost 90% dominance.

DAI is minted when users create a Collateral Debt Position (CDP) on the Maker platform; loans are overcollateralized at a ratio of 150% or higher. Simply put, CDP is the Ethereum you lock up in the smart contract until you pay back the DAI you borrowed. The value of your locked up ETH must always account for more than 150% of the amount of DAI you borrowed, otherwise your collateral will be sold. When you pay back your DAI (together with the stability fee, which is 20.5% at press time but is subject to frequent changes), you can get your collateral back, and the DAI you borrowed are destroyed.

For example, you want to borrow DAI for $1,000. You then need to lock up some Ethereum in the system, at least $1,500’s worth. In a year, you will return your borrowed DAI and pay a stability fee, which is $205 in this case. After that, you get your locked ETH back. If your CDP is liquidated, you have to pay a 13% liquidation fee.

The fees are paid in MKR tokens. The Maker token is another cryptocurrency of the MakerDAO platform. The MKR token price is as volatile as the crypto market in general. It is used to support DAI in 2 common cases: 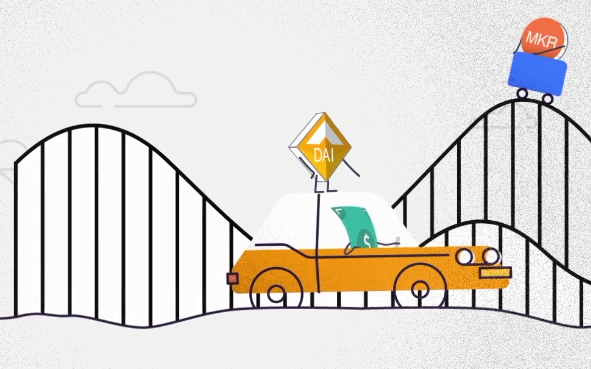 DAI is a stablecoin pegged to USD, while MKR has a variable value. Source: MakerDAO

Compound is an open-source (which is mandatory for DeFi) protocol that was built to help users earn interest on their assets or borrow cryptocurrencies. When a user supplies assets to Compound, they become so-called “cTokens”. cTokens represent your funds on the platform – when you supply ETH, you get cETH on Compound; when you send DAI, you get cDAI; and so on. Simply holding cTokens will give users interest: over time, each cToken can be converted into a corresponding token at a higher exchange rate. It means that the number of cDAI on your Compound account stays the same, but you can exchange them for more DAI.

cTokens are used as collateral when users borrow assets on Compound. Borrowing capacity (i.e., what portion of their collateral a user can borrow) depends on user’s token balances and their liquidity. Illiquid and small-cap assets are bad collaterals, while liquid and high-cap cryptocurrencies make good collaterals and allow for the borrowing of more. Here’s a list of Compound annual percentage rates for supplying and borrowing assets: 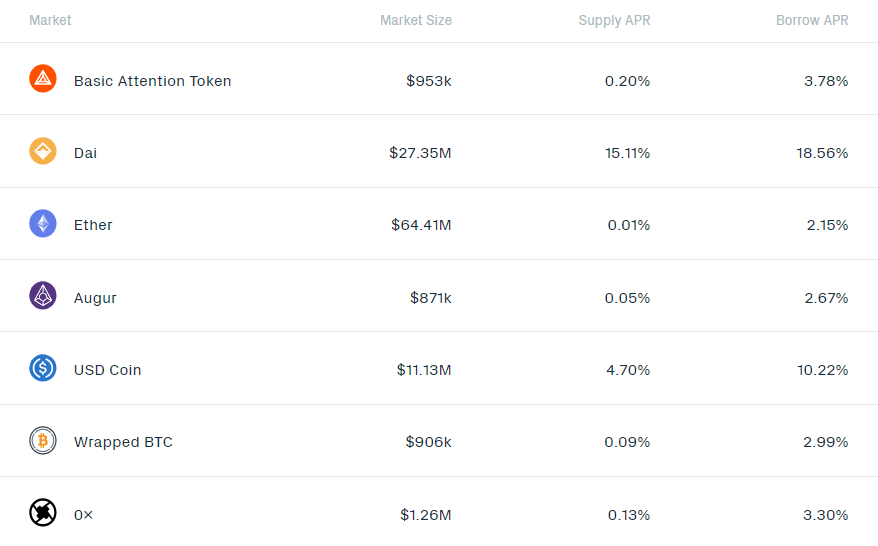 Compound has always been open to partnerships and ready to provide interoperability with third-party applications. In May 2019 Compound launched its v2, and partnered up with:

InstaDApp has skyrocketed over the last fortnight. The meteoric rise of the platform that calls itself an “autonomous banking portal” can be seen on the chart below. 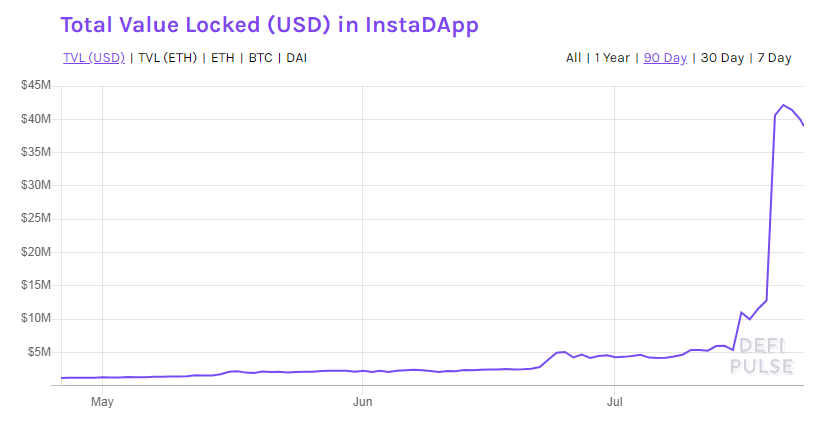 InstaDApp’s most prominent goal is to bring mass adoption to DeFi protocols, and they are trying to accomplish this by making things as simple as possible. With InstaDApp, you can lend and borrow assets on Maker or Compound, without knowing anything about MKR tokens or cTokens. A simple dashboard allows you to manage your assets in both Maker and Compound, and swap assets using Uniswap. A protocol bridge function provides the opportunity to move your locked up assets from one protocol to another. For example, if you want to move your CDP from Maker to Compound, InstaDApp pays it back to Maker and moves the corresponding amount of ETH to Compound.

Nuo Network is another platform that offers borrowing, lending, and margin trading of crypto assets. At press time, Nuo supports ETH, DAI, USDC, MKR, LINK, KNC, ZRX, REP, BAT, TUSD, and WBTC. Loans need to be over-collateralized at a range of at least 1.5x – so for a $100 loan in ETH, the collateral should be at least $150. Interest rates vary depending on the selected cryptocurrency and its supply and demand. Here are some borrow rates for popular cryptocurrencies on the platform:

Though Nuo Network went live in January 2019, it still calls itself an experimental technology and warns users that it should be used at their own risk. Other DeFi applications, namely Uniswap and Kyber Network – partner exchanges of Nuo – are used for placing trades.

In this section, we are going to discuss how users can benefit from using the aforementioned platforms.

First, lenders are able to earn interest on their assets. A HODL strategy can be beneficial in the long-term, but lending provides an opportunity to get additional rewards.

Second, though holding cryptocurrency can be profitable as its price might rise over time, this is not the same with stablecoins. Their prices are not as volatile, and lending is a way of making some profit off of them.

First, borrowers are able to short assets, i.e., borrow and sell them immediately on any exchange for another coin. It is similar to the margin trading function on a centralized exchange. It also allows users to enter into margin trading on platforms where margin trading is not supported.

Second, users can borrow specific assets to get governance rights on the blockchain of their choice. For example, you can borrow ZRX to vote for protocol upgrades and implementations on the 0x chain.

Simply put, users can make money off arbitrage when they borrow assets on one platform and lend them on another (the borrowing rate must be lower than the lending rate, of course). Decentralized platforms often have large spreads between borrowing and lending rates, which makes arbitrage impossible although arbitrage between centralized and decentralized platforms is a much more likely scenario. For example, If you have access to USD credit at rates below 8%, you can then exchange those USD to USDC and lend them on Dharma at 8% APR.

There’s obviously an increasing interest in lending protocols and platforms on DeFi. Statistics show that the total locked value has risen over the last 6 months, and Maker is steadily losing its market share, although it is still the market leader with over 60% dominance. A number of other projects have come to the industry, but all of them bring not only benefits, but also high risks. Besides, the lending terms can be much worse than DeFi proponents want them to look.

Ryan Adams, the founder of the crypto asset investment company Mythos Capital, and a strong proponent of DeFi, took to Twitter to record a $1M DAI loan. According to him, the future lies with money robots that will issue loans faster and more effectively than humans, and without unnecessary paperwork or the need to check credit history. 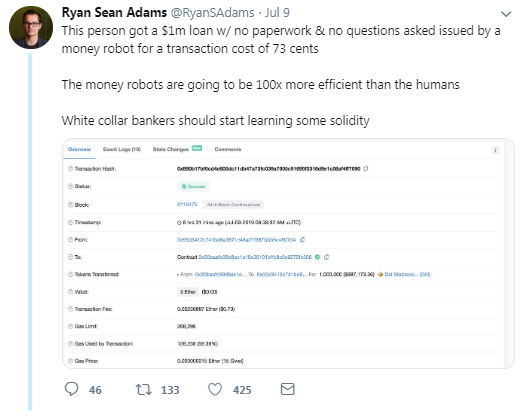 He was opposed by Preston Byrne, an attorney at Byrne & Storm, a structured finance and derivatives lawyer. He noted that for a $1M loan, a person needed to collateralize it with $1.5M and pay 18% interest. With that said, traditional loans are far more beneficial, even with their known drawbacks (lack of accessibility, the issuance time, loads of documents required). 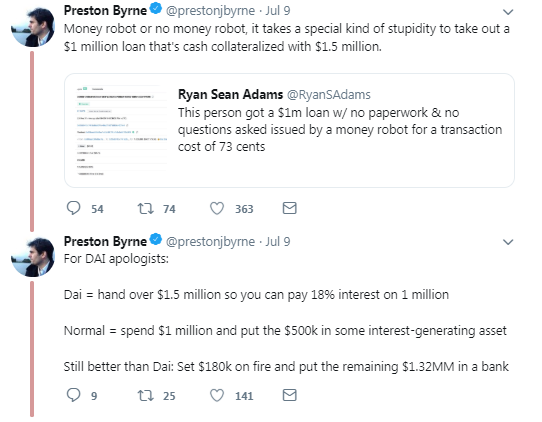 It’s important to mention that since the debate, the DAI stability fee has been raised again, and has reached 20.5%. As reported on July 22, 2019, a new (and probably higher) stability fee could be introduced in the near future: voters can choose within the range of 16.5% to 24.5%. The fee increase affects the amount of ETH locked in Maker. In April 2019, the peak was reached when around 2.1% of all ETH was locked. The stability fee was 7.5% back then. After that, the continuous attempts to get DAI price back to USD price resulted in a significant decline. In June 2019, the stability fee stood at 17.5%, and only around 1.5% of all Ethereum coins were locked in Maker. At press time, 1.32% of the Ethereum supply is locked up.

Interesting enough, Vitalik Buterin himself has claimed that DeFi has great potential. During his talk at ETHCapeTown 2019, he suggested that such projects as MakerDAO, Augur, Uniswap, and others would disrupt the insanely inefficient traditional finance sector. During an AMA on Reddit, he also revealed that he was holding Kyber (KNC), OmiseGo (OMG), Maker (MKR), and Augur (REP).

The raising of the MakerDAO stability fee is not the only matter of concern for DeFi, as security issues also appear as a great problem. For example, a user claimed on Reddit that he lost money lending BAT on Nuo Network. 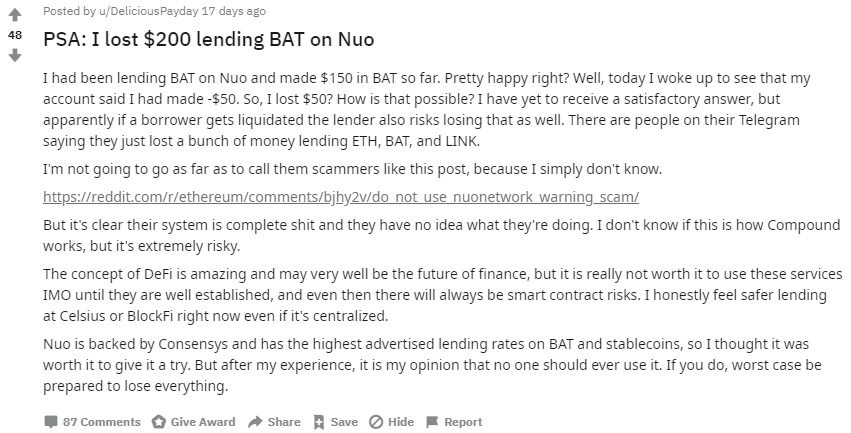 Another issue with the Nuo Network was reported in this thread. A user was margin trading when his trades were suddenly liquidated. He discovered that they were liquidated at a price over 20% lower than the absolute lowest limit found on exchanges. It was suggested in the comments that Nuo admins could liquidate orders manually, and force liquidation of valid orders using the exchange rate most profitable to them. All of that makes Nuo a centralized system.

While some claim that DeFi is one of the perfect use cases of blockchain technology in general, others make fun of super-high interest rates and enormous collaterals. As always, the drawbacks will be overcome as the industry matures. The idea of bringing traditional financial services to the unbanked is grand, but the current situation does not indicate any success in this field. For example, crypto loans (which are supposed to be available to everyone, even without a good credit history) are, in fact, available only to those who can afford huge collaterals and interest rates that are far from lucrative.