Dogecoin, also known as DOGE, is an open-source cryptocurrency that has evolved into an easy-to-use digital currency with a loyal community and an overall ROI of around 350%. So, in this overview, we will discuss all the main aspects of Dogecoin, namely: Dogecoin's origin and purpose, history, market cap, where to buy it, where to store DOGE, and so on.

Dogecoin is a digital currency that is based on Luckycoin, that, in turn, is based on Litecoin. It was more like an entertaining project at first sight. However, since the day of its genesis, DOGE has found wide support among crypto enthusiasts, thus gaining the trust of thousands of hodlers and miners. Today, DOGE is one of the top 7 cryptocurrencies by the number of active addresses. For a brief period in February 2019, the coin entered the top 4, overtaking ETH and XRP.

The idea of creating Dogecoin first found support in November 2013, when Jackson Palmer, the Dogecoin creator, made a joke on social media and tweeted: “Investing in Dogecoin, pretty sure it’s the next big thing.

Jackson Palmer’s tweet that made Dogecoin become a reality.

The cryptocurrency received a lot of support from the Twitter community, attracting the interest of Portland software engineer, Billy Markus, who later contacted Jackson Palmer and offered to create something real with Dogecoin.

The buzz around Dogecoin grew rapidly. So, what started as a joke very quickly became a real cryptocurrency. Dogecoin was created on December 6, 2013, allowing anyone to mine it.

Dogecoin was designed mainly for entertainment and has a less serious atmosphere than other cryptocurrencies, the amount of which, by the way, was much lower than it is today.

Using the codebase of Litecoin, Dogecoin was first designed as a user-friendly alternative to Bitcoin. The cryptocurrency didn’t aim to bring some innovative technology to the masses. Indeed, it was meant to be an easy-to-use digital currency that enabled fast transactions across the internet. One of the distinctive features of DOGE at the moment of its appearance was its mascot. Also, thanks to DOGE’s wide popularity, the asset has been frequently used for charity purposes.

Where Does Dogecoin Get Its Name from?

Dogecoin got its name from the original internet meme "doge", which is based on a photograph of a Japanese dog Shiba Inu.

Doge memes are created using various photos of Shiba Inu, surrounded by text in a Comic Sans font. The text is written in an irregular form, such as “wow”, “so doge”, “much smth”, and is intended to describe the dog’s thoughts.

The Dogecoin logo is the face of a Shiba Inu dog with a big D in it. Thanks to DOGE’s funny logo, the coin drew attention among various social media. Eventually, the coin found popularity even outside of the crypto and blockchain community.

The Dogecoin team completely consists of volunteers. The founding duo, Billy Marcus and Jackson Palmer, now bear the nickname "Shibetoshi Nakamoto", a play on the words "Satoshi Nakamoto", the creator of Bitcoin, and "Shiba", the dog. However, Jackson Palmer is no longer involved with the project. The development team consists of names such as Ross Nicoll, Max Keller, and Patrick Lodder.

As Dogecoin was created using the codebase of the Litecoin (LTC) cryptocurrency, it reflects similar options. The main difference is that DOGE is an even lighter version of Bitcoin than Litecoin. The creation of new blocks in the DOGE blockchain takes even less time than on the Litecoin blockchain – 1 minute in DOGE against 2.5 minutes in LTC.

Dogecoin was originally distinguished by a randomized reward for mining blocks of coins. Later in 2014, this mechanism was changed to a fixed reward of 10,000 DOGE per block.

Dogecoin and Litecoin use a proof-of-work PoW algorithm along with Scrypt technology. Unlike Litecoin, the DOGE supply is unlimited. Below are the main Dogecoin advantages over other cryptocurrencies:

Much DOGE for Charity and Tipping

Due to the active community, DOGE has repeatedly been used for charity and humanitarian purposes. The Dogecoin community on Reddit has 137,000 subscribers or “Shibes,” and they use Dogecoin to tip each other for publishing enjoyable content. On top of that, charities like SocksForTheHomeless use Reddit as a platform to raise money for good deeds.
Below are some of the most significant Shibes fundraisings:

The coin hasn’t lost its popularity over the years; the participation of Dogecoin in several Charity programs helped to keep interest in the project and to gain the trust of the community. Eventually, the DOGE market capitalization rose from $3.5 million up to $350 million. 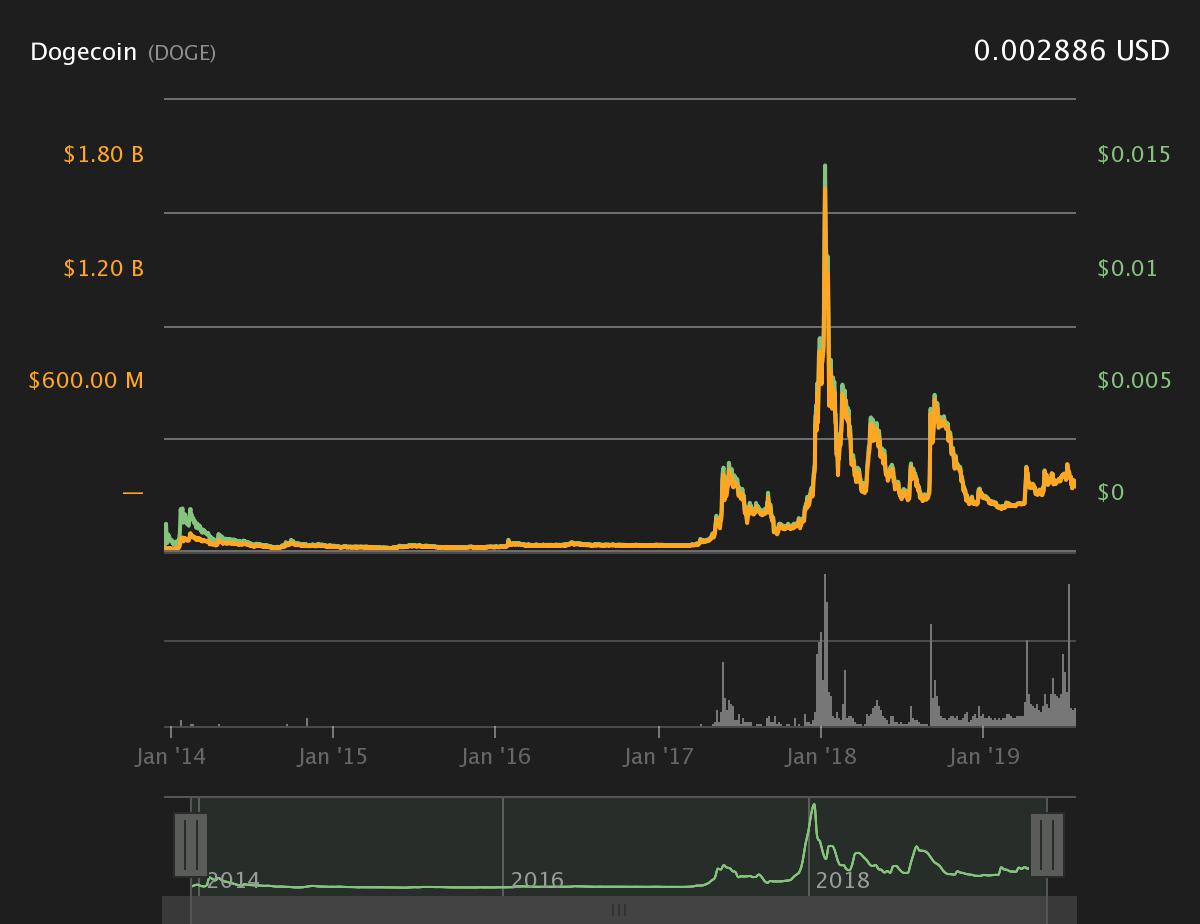 The Dogecoin market cap from the day of its launch until today according to COIN360.

During 2018, the Dogecoin price was affected by the bearish trend (except for a few short-term price risings), DOGE was falling along with the market. 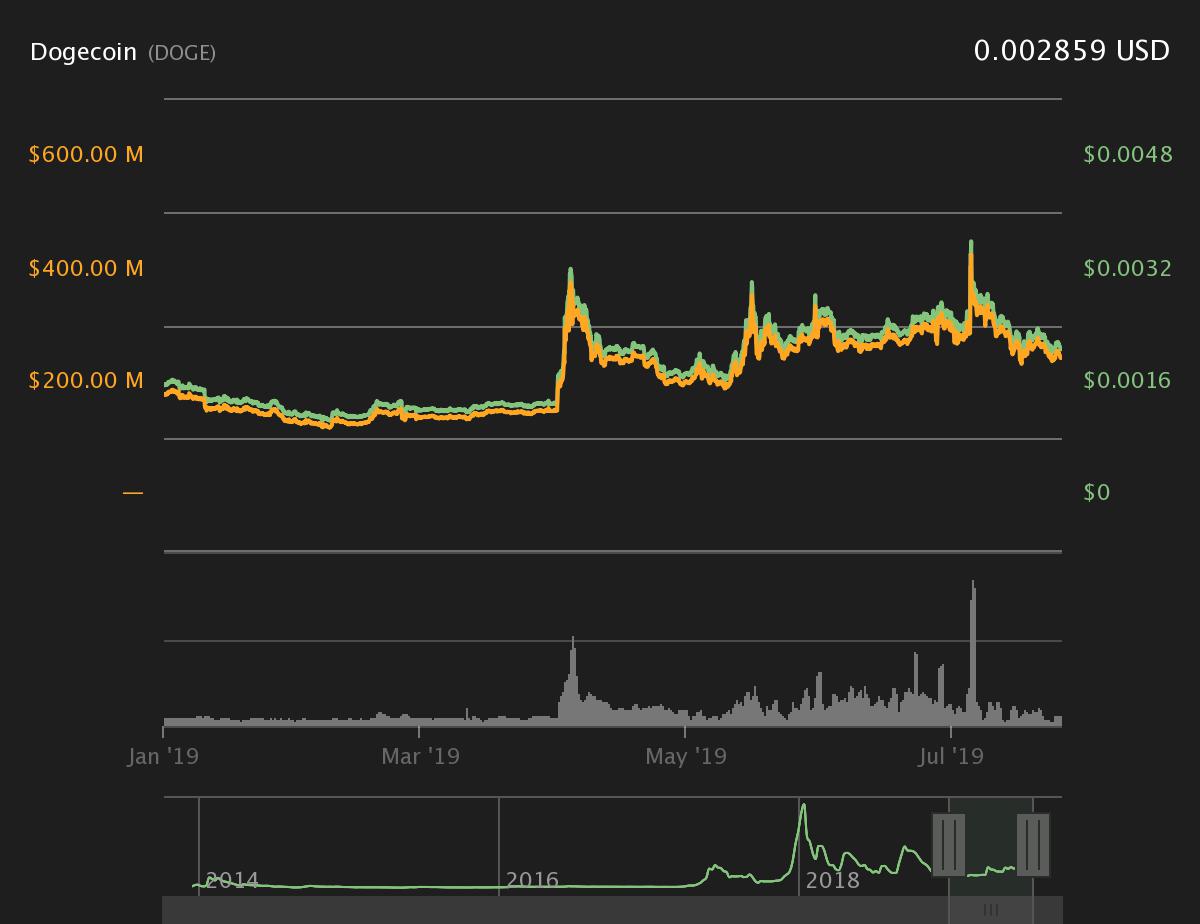 Where to Buy Dogecoin (DOGE)?

There are several exchanges that support Dogecoin and offer pairs such as DOGE / BTC and DOGE / ETH. The most popular exchanges are Bittrex, Poloniex, or HitBTC. You can check the prices in our new Liquidity Book section.

The candlestick chart for the DOGE/BTC trading pair on HitBTC.

Another convenient way to buy or exchange some DOGE is to use instant crypto exchange services. To date, there are various on the market, such as CoinSwitch, Changelly, or ShapeShift. Together with Changelly, DOGE launched a special promo with zero-commission for all exchanges into DOGE until July 31st.

Where to Store DOGE?

There are various wallets that support Dogecoin storage. First, there are software wallets, such as Dogecoin Core, which contains the full Dogecoin blockchain, thus turning a computer into a DOGE node.

There is also a MultiDoge, a software wallet that enables Dogecoin storage but does not turn computers into nodes. There are also online wallets, such as Dogechain, which allow for the use of the blockchain without saving crypto on your computer.

Finally, there are hardware wallets, such as Ledger or Trezor, which are portable hardware devices and represent the safest way of storing crypto.