People’s brains are wired to detect dangers and threats, which makes us pay more attention to the bad news than we do the good. Traditionally, the news media exploits this tendency of ours by emphasizing failures. They thrive on FUD and attention from readers, which is easy because no company is immune to mistakes, regardless of whether it’s a small company or a large and reputable one. Sometimes fails are funny and stupid, but in some cases, they cost millions of dollars and result in a company shutting down.

In crypto, fails happen even more often than in other spheres due to a lack of established business protocols and procedures and the cutting-edge nature of the crypto industry. The cost of mistakes in crypto can be even higher than in traditional finance as the amount of money involved in crypto is comparable to that involved in traditional markets, and in some respects even outweighs it. Government involvement in crypto is not a real factor. On the one hand, this means there is an absence of clear and precise crypto regulations. On the other, no precedent of a government saving a crypto company have been set, whereas “too big to fail” is a working principle in traditional finance.

This article will cover some epic crypto fails: mistakes which didn’t lead to company shutdowns but were costly anyway.

A very costly tweet not only erased tens of millions of dollars but also destroyed a company’s reputation.

Waltonchain, an IoT blockchain project (you can learn more about it and other companies, as well as about IoT blockchain projects here) started a Valentine’s Day contest. To enter the contest you had to follow the Waltonchain Twitter account, retweet a specific tweet, tag one of your friends and put #WaltonchainLove in your comment. 214 winners were chosen from all eligible participants to share a prize pool of 564.96 WTC.

What happened next gets an honorable place in our epic fails list. After the winners were announced, a Waltonchain team member forgot to switch accounts and used the official Waltonchain Twitter to comment as if he or she had just won. 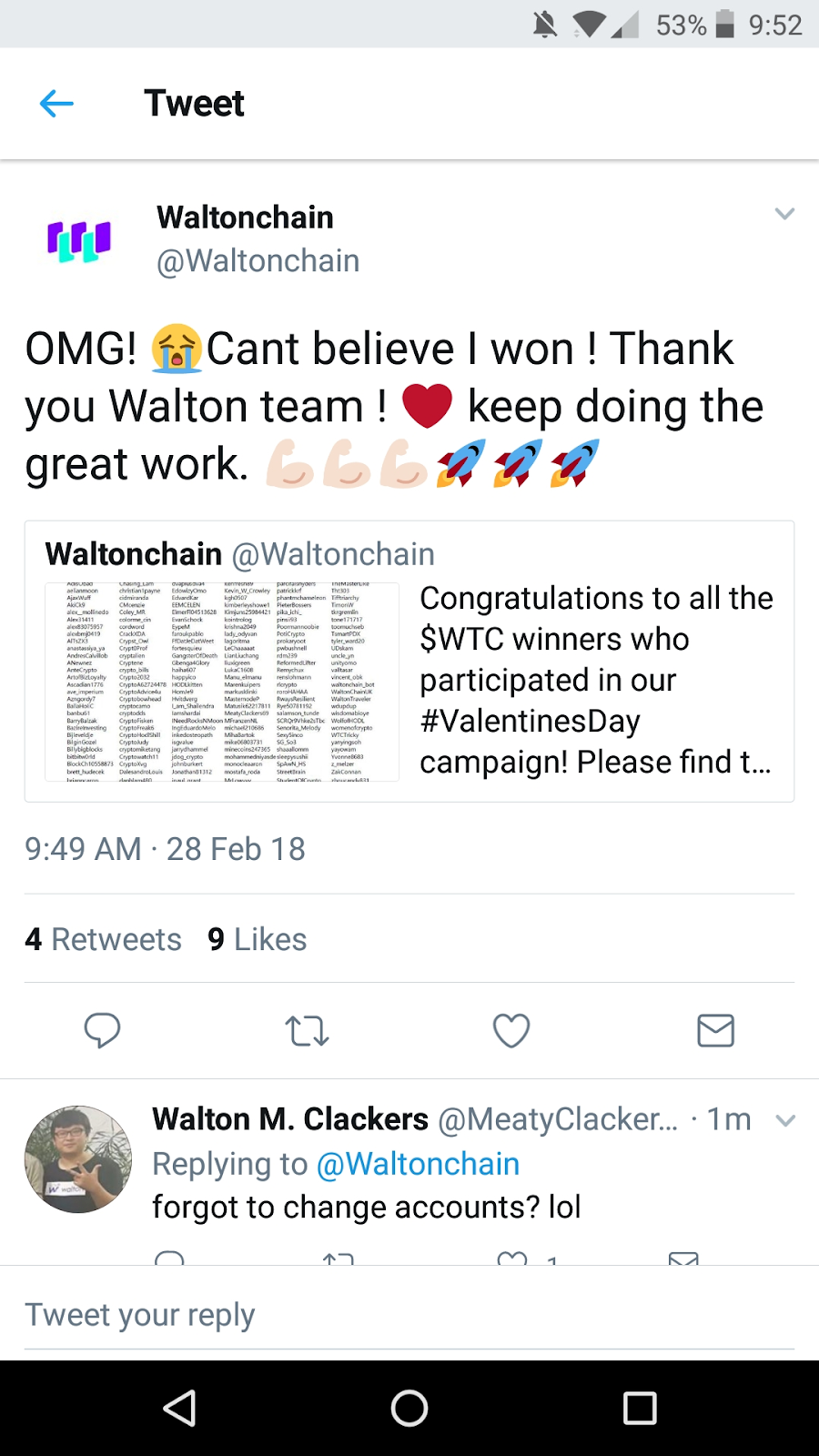 The unmasking tweet was deleted immediately, but the Internet saved it. The scandalous screenshot spread rapidly, and the Reddit thread which revealed it was upvoted over 9,000 times. Users called the contest fake and a scam, and in protest started to dump Walton Coins. As a result, the Waltonchain price shed from $22.5 to $17.5 just hours after the infamous announcement of the contest results, and instead of #WaltonchainLove the company got hundreds of hate messages and market cap losses of around $130M.

The official statement of Waltonchain came on Mar. 1, 2018. It read: "A Waltonchain team member was among the winners and excitedly tweeted using the wrong profile". It was also announced that the team member’s prize was canceled and from that moment on team members were prohibited from participating in any other Waltonchain campaigns.

ASKfm: a Death on Everest

ASKfm, a platform for asking and answering questions and one of the top 10 social media networks in 2018, got into the spirit of the crypto frenzy and decided to launch its own token to incentivize content creation and distribution.

To promote their upcoming ICO, they organized an expedition to Mount Everest. The idea was to reach the summit and to place a ledger wallet with some 500,000 ASKfm tokens (worth $50,000 in ICO prices) there. On May 14, 2018, the goal was achieved. 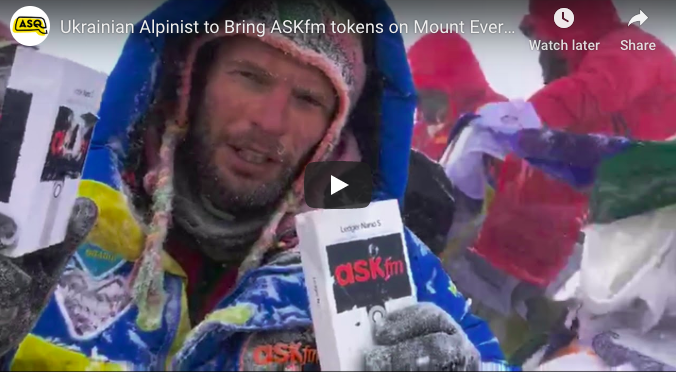 The expedition brought ASKfm tokens on top of Mount Everest.

The ASKfm celebratory Medium post failed to even mention the poor Sherpa, who died during the descent. Sherpas are local people who assist climbers reach the summit of Mount Everest. Sherpa Lam Babu was left behind after the team reached their ambitious goal as if his life cost less than a handful of tokens.

The community was outraged by the project’s cynicism. From that point on, the ASKfm crypto affair went downhill. The ICO never took place, askfm.io (which was launched especially for the ICO) shut down, and no news has appeared regarding crypto integration. ASKfm is currently operating as usual, and even rewards users with their internal currency which has nothing to do with crypto and can be used for in-app purchases. It is not clear whether it was the sherpa tragedy that affected ASKfm crypto initiative so badly, or there were other reasons for its failure. Anyway, it’s a prime example of a crypto fail.

QuadrigaCX: a Death, a Fraud, a Bankruptcy

A crypto exchange CEO died suddenly, and nobody could access his cold wallets which supposedly held $190M of user funds.

A sudden death is a sad event in itself, but the death of Gerald Cotten, the 30-year-old founder and CEO of Canadian crypto exchange QuadrigaCX, grieved not only the people close to him, but also everyone who used his exchange. Soon after the news broke that Cotten died in India from Crohn’s disease in December 2018, it was revealed that around $190M of user funds were missing.

Allegedly, Gerald Cotten transferred user funds from exchange accounts and used them as security for margin trading on other platforms. All the assets were kept in cold storage, and only Cotten could access them. After his death, only $286,000 were left on the exchange’s balance, while the platform owed $190M to its users.

In February 2019 exchange management filed a petition to protect creditors in the Supreme Court of Nova Scotia and announced an audit by Big Four firm Ernst&Young. In April QuadrigaCX was officially announced bankrupt.

Lots of rumors have circulated that Cotten just faked his own death. Cotten’s decision to write up a will just days before his death caused the suspicion. Perhaps it’s just fraud supplemented by an exit scam and a new fatal disease narrative. But if we assume that Cotten really died, and didn’t reveal his personal keys even to his wife, it could be the biggest crypto fail in history.

Playboy and VIT: a Screwed up Partnership

Playboy wanted to integrate crypto payments, but the plan failed.

In March 2018, Playboy Enterprises Inc. announced that it was planning to develop a crypto wallet to enable payments with cryptocurrency, specifically VIT – Vice Industry Token – which was created to reward users for watching adult content.

In May, Global Blockchain Technologies, a Canadian firm, announced that they started work on the wallet. According to the agreement, the firm would have to integrate VIT payments on Playboy’s media sites and transfer $4M to Playboy for using their brand in its marketing campaigns. As Playboy later claimed, none of these obligations were fulfilled, which resulted in a lawsuit based on allegations of “fraud and breach of contract”. Though, according to Global Blockchain Technologies’ response, the suit was just a “normal dispute” between two firms.

As for VIT, the cryptocurrency company also felt offended and announced that it was ready to sue Playboy. According to VIT CEO Stuart Duncan, Playboy took millions of dollars from VIT in token equivalent and never gave anything back in return.

Interestingly, both GBT and VIT have rebranded since the infamous partnership. VIT is now called Vision Industry Token, and the former GBT is now known as Global Gaming Technologies Corp. By the way, VIT has finally managed to integrate its token into other platforms providing adult content. For example, it partnered with Tube8 (10 million users and over 150 million monthly visits). Nevertheless, the Playboy partnership was a complete failure for VIT.

Tron failed to write an original whitepaper, and people made a lot of fun of them for it.

Tron has always had an aura of controversy around it, and a significant part of these controversies have been thanks to its CEO, Justin Sun. However, this exact fail doesn’t have much connection to the controversial personality of Justin himself. Perhaps he didn’t even notice that a part of Tron’s whitepaper was plagiarized from the whitepapers of IFPS and Filecoin… But it was noticed by crypto enthusiasts in January 2018, who spread the news on social media. Soon much of the crypto community was busy comparing whitepapers. It appeared that Tron didn’t copy the documents word-for-word, but the structure, vocabulary, and even formulas looked quite similar.

The crypto community is sometimes unforgiving, and months after the plagiarism was revealed, the joke was still going on. For example, when Justin Sun posted on Twitter Tron’s advantages over Ethereum, Vitalik Buterin didn’t let the chance to troll him slip by: 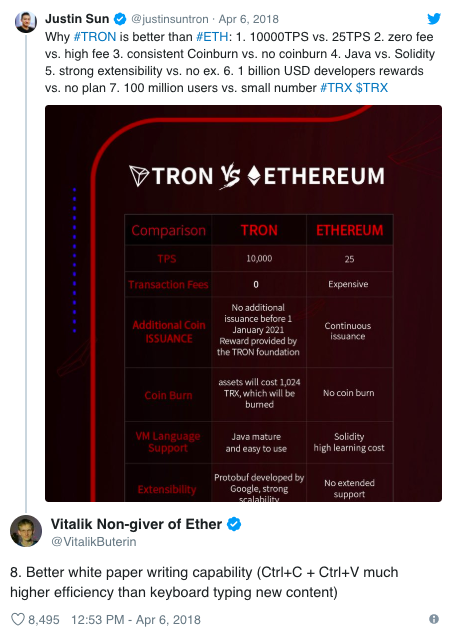 There are some important life lessons that can be found in this article. First, always check that you are posting from the right account. Second, never promote your project in dangerous and life-threatening ways. If something goes wrong, people will likely remember not the benefits of your project, but the tragic accident. Third, only store large amounts of crypto in cold wallets without saving the printed keys if you’re comfortable with them disappearing along with you. Fourth, do business only with trusted partners. Finally, don’t brag much about your project: the more you talk the more people there will be setting their target on you. And try not to plagiarize, though even Vitalik Buterin admits that it’s much more efficient than creating your own content.

As always, thanks for reading,