Experimental Bitcoin Indicators: What Past Prices Reveal About Present Trends

Cryptocurrency price indicators can help us describe and understand crypto market trends of the past and, in some select cases, even give tentative predictions of what’s to come. The following are some experimental indicators for the price of Bitcoin, explained.

Disclaimer: Indicators that depend on a network’s transaction volume will require calibration after Bitfinex, BitMEX and OKCoin start using the sidechain known as Liquid (as of February 14th, only transactions operating between individual nodes and The Rock Trading exchange are using Liquid). They will also require calibration for any network that uses sidechains, state channels, and any other technology that reduces visible activity (number of transactions) on the blockchain. This article’s main source is Blockchain.com, whose estimation methodology has not been disclosed to us. NV (Network Value) is equivalent to Bitcoin’s market cap. DMA means Daily Moving Average. You can click on the graphs to enlarge them.

This indicator, created by Willy Woo, was an attempt to create the equivalent to a price-earnings ratio (PE Ratio) for the Bitcoin market. It was first introduced via Twitter on February 23, 2017. Woo explained its essence in an article published by Forbes on September 29, 2017. The formula for NVT ratio is:

This was later changed in a revision of the NVT ratio, called the NVT Signal (Signal applies MA only to the volatile Transactions component, without smoothing the already stable NV; more about this in the following section). Woo himself agreed that Signal is a more responsive indicator than Ratio.

NVT Ratio can be used to:

According to Woo, NVT Ratio can be applied to other cryptocurrencies besides Bitcoin only if another coin’s network shows a strong connection between transactional value and network value. In other words, the value transmitted on-chain needs to be a good representation of how much the network is being used. For example, NVT ratio would be a better indicator for a network like Ethereum than for one like Decred or Dash, where transactional activity results from staking, and is not a good representation of the network’s utility.

This indicator is a variation on the NVT Ratio, created by Dmitry Kalichkin and first published on 4 February 2018. Kalichkin noticed that a spike in NVT appears only a few months after a bubble peaks, when the network is already in the middle of a correction period (i.e. it is neither predictive nor descriptive, capable of detecting bubbles only after they have burst). In addition, after some empirical tests, Kalichkin decided to change Woo’s unjustified 28-day MA period to a 90-day MA period, and to use it to smooth only the Transaction Volume parameter (the denominator), rather than the whole ratio. Thus, NVT Signal was introduced. It is calculated as follows:

According to Kalichkin, NVT Signal is a better descriptive metric of Bitcoin bubbles than NVT Ratio (though it cannot predict them with certainty). Like its predecessor, Signal can be applied to other cryptocurrencies, but not to all of them. Woo has said Signal is “responsive enough to be used as a trading indicator (...) probably the first trading indicator to use blockchain data instead of the basic price and volume data coming in from exchanges.”

Though even Woo admits NVT Signal is an improvement, some of the old drawbacks remain:

This indicator was created by PositiveCrypto and published on October 18, 2018. It is not a formula, but a description of the relationship between BTC’s price and the Bitcoin network’s daily transaction values (measured in BTC, not USD). These are related in unsynced cyclical patterns. Because of this, DTVs can act as an indicator for price (showing what market phase the price is likely to enter next). Cryptocurrency price and DTV cycles are unsynced because they’re motivated by different actors: short-term crypto market participants who are dictating short-term price action, and longer-term hodlers and crypto investors who are purchasing Bitcoin on-chain, respectively.

The indicator distinguishes three phases. In the Early Bear phase, DTVs drop and prices begin to fall: hodlers have stocked up and will hold BTC in wallets, while others are short selling with their exchange balance. In the Late Bear phase, we see DTVs rising, but the price remains flat: this means an event has made hodlers return to the crypto market, so transaction volume rises and the price stabilizes for a moment. Once daily transactions reach a sustained, healthy minimum, the Bull phase hits; the cryptocurrency market finally responds with a price increase (and it’s always higher than in the last Bull cycle because there are now more coins in circulation). 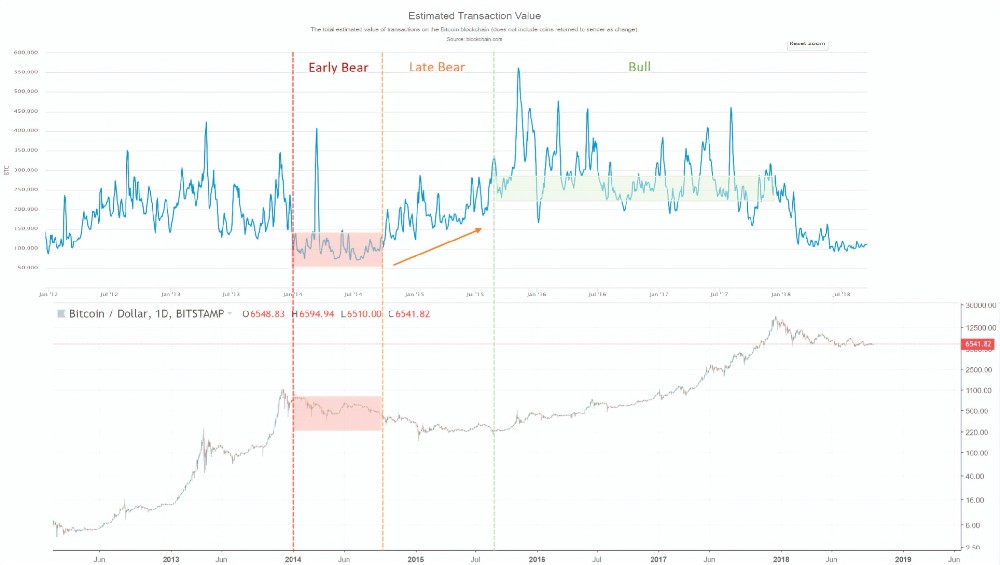 An analysis of the BNM since Bitcoin’s creation up until now conducted by the Trusted Volumes team found that, between January and mid November in 2018, the rise in Bitcoin DTVs preceded a surge in Bitcoin's price by 3 to 4 days with a Spearman correlation of 72%. However, no correlation was found for other time periods.

This indicator was presented by Trace Mayer on 28 November 2017 as a way to compare Bitcoin’s current price against its historical price movements (with a 200-day MA). The Bitcoin Mayer Multiple highlights when Bitcoin is overbought or oversold in the context of longer time frames.

Through a simulation, Trace Mayer determined that, so far (there’s no predictive power to this indicator), crypto investors have achieved the best long-term Bitcoin returns when the Mayer Multiple has been lower than 2.4X. Every time the Mayer Multiple has hit above the 2.4X line, it has returned to the average rate of the whole period (1.39X at press time). This indicator is available in real time, through this API.

This indicator was created by David Puell and Murad Mahmudov, and published on October 2, 2018. It compares crypto market value to realized value, which helps identify market tops, and to indicate when the cryptocurrency exchange traded price sinks under “fair value.” While market value (cryptocurrency market cap) assigns the same USD price to every coin ever mined, realized value counts the price paid for each coin when it last moved on the blockchain. This adjusts for lost coins and hodled coins. MVRV is calculated as follows:

When calculated for a longer time period, the formula produces an oscillator in which two historical thresholds emerge: 3.7, which denotes overvaluation, and 1, which denotes undervaluation. It evokes the results of the NVT Signal and the Mayer Multiple.

Puell and Mahmudov recommend analyzing crypto market value and realized value both as a ratio and separately, due to the possibility that realized cap may drop if “strong hands lose confidence in Bitcoin”.

This is a second indicator created by Dmitry Kalichkin, published on May 22, 2018.

Some backstory is necessary to understand the NVM. Metcalfe’s Law states that the value of a network is proportional to the square of the number of its connected users; when applied to a blockchain, to the square of the number of DAA. In an attempt to define Price-to-Metcalfe Ratios (PMRs), researchers from Clearblock divided actual Network Value by one predicted by a few variants of Metcalfe’s law (Odlyzko’s law, Metcalfe’s law and Generalized Metcalfe’s law). Using these three laws as a denominator for the PMR formula gave contradicting results for December 2017 and for May 2018: Metcalfe’s law overvalued the network value, while Odlyzko’s law undervalued it.

So Kalichkin used both Metcalfe’s Law and Odlyzko Law to define upper and lower bounds for NV Fundamental (network value), and derived a ratio that is indicative of Bitcoin overvaluation.

The following formula was used to calculate the NV Fundamental:

Then the indicator is:

To be able to assess overvalue/undervalue no matter how wide the corridor is, normalization is applied.

The indicator works like this: if a rise in NV is not accompanied by a corresponding rise in network activity, then Bitcoin is overvalued. In some cases this has been applied to other currencies.

There are ongoing attempts to create models for the objective evaluation of cryptocurrency prices. At the moment their application is hardly possible, as they require specific cases (as in the case of INET and VOLT, named after fictional tokens), DCF and DDM (which come from finance), or they make imprecise assessments, like COP:

The community’s desire to somehow predict the future trends of the crypto market is unceasing, so new research and attempts to perfect these and other indicators – or even create new ones – are bound to keep coming. It is important to always keep in mind, however, that no indicator can have real, complete predictive power over markets. These are study tools which, used with caution, can enlighten future decisions and even guide innovation.