Facebook Falls out of World’s Top 10 Most Valuable Brands

Facebook, which has recently been in the spotlight thanks to its Libra cryptocurrency, dropped 12% compared to last year and fell out of the world’s top 10 most valuable brands. According to the latest report of Interbrand, part of Omnicom Group Inc., Facebook’s current estimated brand value is $39.9B, which puts it at fourteenth place on the list. 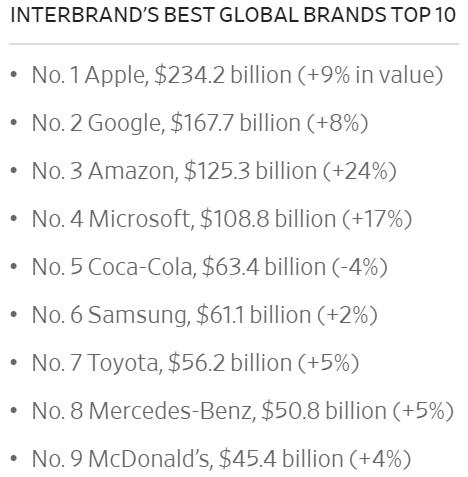 Interbrand is a brand consultancy firm that evaluates global companies based on their financial performance, the role they play in purchasing decisions, and users’ loyalty. The annual “Best Global Brands” report and ranking show the world’s most valuable brands for customers and shareholders.

Facebook increased steadily and peaked in 2017 when the brand reached eighth place on the list. In 2018, Facebook was exposed to bad publicity, namely the Cambridge Analytica scandal. Cambridge Analytica Ltd. got access to Facebook’s users’ personal data without their consent. It caused a massive outcry, over $100B loss in Facebook’s market value, and users’ trust in Facebook plunged by an overwhelming 66%. As Charles Trevail, global chief executive at Interbrand, claimed, “The lack of trust in a brand, if it goes to the heart of its business model, is really going to affect a brand.”

Apple remained №1 in Interbrand’s rating with a $234.2B estimated brand value, and Google kept the second position with $167.7. Both companies saw gains in value, 9% and 8% respectively. Amazon became the biggest gainer of top 10, with a 24% surge and a $125.3B brand value.