Facebook has revealed the percentage breakdown of the basket of global currencies backing its Libra coin in a letter to a German legislator Fabio De Masi. According to an article in Der Spiegel, the U.S. dollar will make up 50% of the basket, with the euro, yen, British pound and Singapore dollar comprising the rest.

The composition of the basket will look like this: 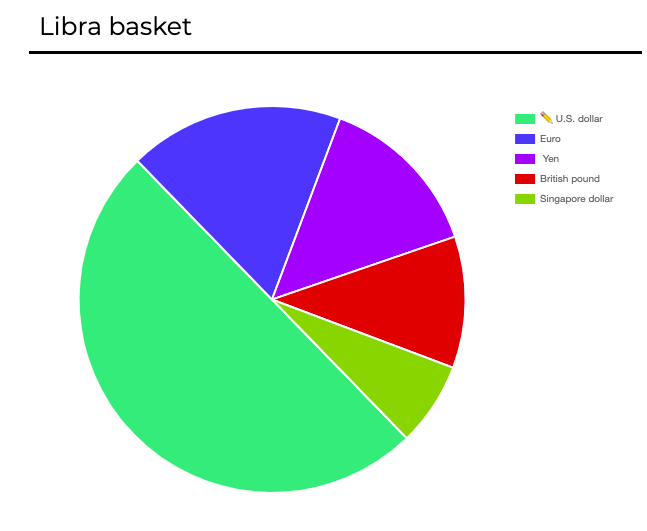 According to Reuters, the Chinese yuan currency will not be included in Libra’s backing basket due to the political tension and trade wars currently ongoing between the U.S. and China.

Der Spiegel reports that Fabio De Masi is one of the German politicians who believe that Libra is a threat to financial stability. Nearly 2 weeks ago, after Bruno Le Maire claimed that the Facebook-led cryptocurrency project is threatening the “monetary sovereignty of states, the French and German governments released a joint statement declaring that "no private entity can claim monetary power, which is inherent to the sovereignty of nations."

As COIN360 reported last week, the future of Facebook’s Libra initiative may become more clear tomorrow, when Congress discusses the regulation of Libra and other “parallel currencies” in a scheduled hearing. According to a previously issued memorandum, the Libra stablecoin “could be classified as security since it is intended to be sold to investors to fund startup costs and would provide them with dividends.”

In the meantime, managing director and chief operating officer of the Libra Association Bertrand Perez shared that the team is “fully aware of the issues related to money laundering and terrorist financing” and despite the fact that a lot of “work” should be done “with regulators to address them,” the team is committed to launch Libra on schedule, “between the end of the first half of the year and the end of 2020.”