After Bruno le Maire’s claim that the Facebook-led cryptocurrency project is threatening the “monetary sovereignty of states,” French and German governments have released a joint statement declaring that "no private entity can claim monetary power, which is inherent to the sovereignty of nations."

While France and Germany are blocking Libra’s development path, the blockchain community is actively expressing doubts about the motivation behind these actions. Even vocal opponents of the Libra project, like author of The Bitcoin Standard, Saifedean Ammous, point out to the lack of freedom on the global financial stage, which challenges even the biggest players. He shared his stance on Twitter:

“How astonishing it is that an anonymous programmer made a currency that has grown non-stop for ten years when Facebook, one of the world's most powerful & richest corporations, can't even launch their currency.”

Later, he tweeted on the topic, saying the Facebook’s Libra efforts have made it clear that people really only have two choices when it comes to control of their finances. 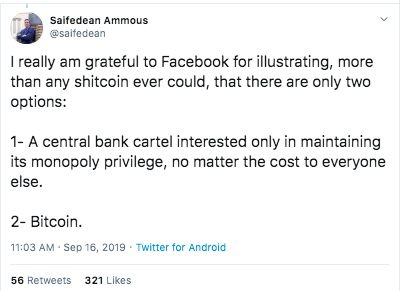 Last week in an interview with Globe, Vitalik Buterin called Libra a “wakeup call for governments.” According to Vitalik, a project like Libra are a challenge to governments, and force them to think about “creating a sovereign digital currency."

On the other hand, doubts concerning the technical structure of the project still remain. In Buterik’s opinion, “Libra's current planned structure is not the best for privacy” and poses real risks for users and governments.

Additionally, managing director and chief operating officer of the Libra Association Bertrand Perez shared last week that the team is “fully aware of the issues related to money laundering and terrorist financing” and despite the fact that a lot of “work” should be done “with regulators to address them,” the team is committed to making its launch happen on schedule, “between the end of the first half of the year and the end of 2020.”