Get The Popcorn Ready

The market is ebullient, Bitcoin is up nearly 38% for the month-to-date and is now trading above the $7,000 level, and Ethereum looks set to again test the technically significant $200 level. The rally has been very broad but Bitcoin has been the clear frontrunner, and, as pointed out last week, the market has been fragmenting even more with a pronounced decoupling taking place.

Regarding the decoupling, Bitcoin’s correlation to the likes of Ethereum, EOS, and XRP stood as high as 0.9 for a prolonged period of time. Recently, however, the correlation has fallen dramatically to 0.7 with Ethereum and is currently below last year’s low of 0.76 which took place around the well documented Bitcoin Cash hard fork. At the same time, the correlation against more traditional assets has turned negative; though only at -0.2 vs S&P 500, the correlation is likely to be deemed weak at best. Crypto maximalists will, of course, focus on the positive correlation to Gold, but enthusiasm should really be measured, as the correlation metric is between 0.1-0.2 (i.e. weak).

So, while the market is decoupling, the underlying blockchain metrics are showing limited improvements and no, the exponential growth in number of blockchain wallet users is not a great metric since the total number of unique addresses used on the Bitcoin blockchain has remained stable, while the price has been undergoing a parabolic rise. What’s more, the Tether premium which rose to above 6% following the release of the news relating to Bitfinex & Tether, has now fallen back to zero. This, according to crypto analysts, is an indication of “less risk” percolating in Bitfinex.

However, while crypto maximalists have been busy fixating on new crypto bull run projections and proliferating “to the moon” memes, a lot has been going on behind the scenes. In particular, the China/US trade war is entering another critical phase and the Federal Reserve has buckled under the pressure from the administration and turned dovish. China is particularly important for the Bitcoin market given the use of stablecoins as a path out of Yuan during times of uncertainty.

On that note, it is worth remembering that China recently reiterated its unfavorable stance towards Bitcoin mining, the government has also reduced the daily FX withdrawal limits and there are numerous reports that China banks and corporates are short of Dollars.

Something else worth pointing out is the sharp rise in Chinese imports of precious stones from Hong Kong. As noted by the FT, this puzzling set of events has echoes of 2015-16, a period that spanned a devaluation of the renminbi, capital flight from China and a plunge in the country’s stock market. Then, precious stones accounted for 90 percent of Hong Kong’s exports to the mainland. 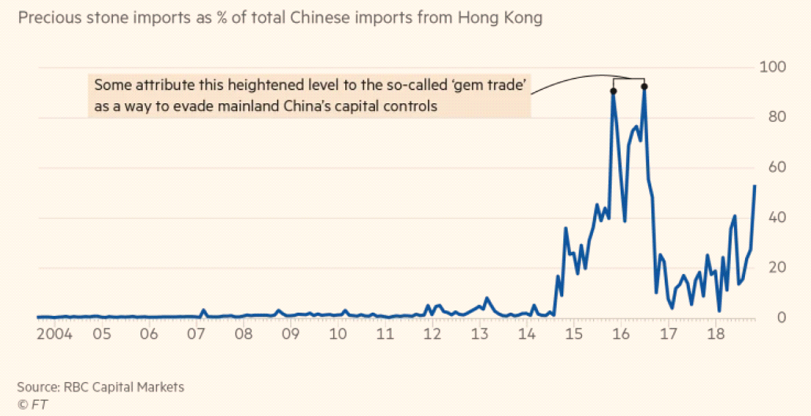 As pointed out by RBC Capital Markets, during this period, Chinese importers were deploying “inflated invoices to get money out of China”, as the renminbi fell precipitously and Beijing tightened its capital controls in an attempt to prop up its currency. If some mainlanders are again using the notoriously opaque gem trade to evade capital controls and transfer assets out of China, this may be an ominous sign for the direction of the Chinese currency, and by extension, the economy. (Source: FT)

Why does any of this matter for Bitcoin…? Because again the fundamentals of the network are being hugely overlooked and markets are becoming complacent. Everyone knows how extremely crowded and one-sided trades usually end up, but it is difficult not to follow the crowd. The stars are aligning, get the popcorn ready, it’s showtime…