Go With The Flow

The cryptocurrency market continued to edge higher yesterday and, while profit taking at this stage should not come as a surprise, the bias higher remains intact. For contrarians out there, the current price levels offer an attractive opportunity to go against the trend but fighting the momentum in the crypto market could be a very dangerous game. 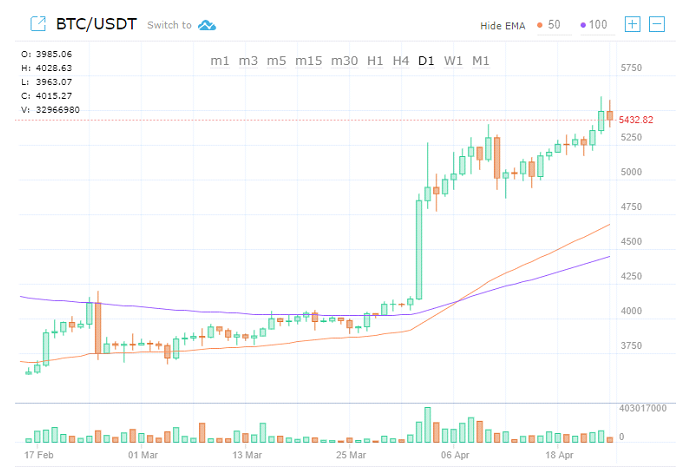 Zooming in, the widely followed moving averages formed a formation known as the golden cross, where the 50-day moving average (DMA) crosses above the 200DMA. The last occurrence of a crypto golden cross, back in October 2015, marked the start of the bull run which saw Bitcoin rally from $300 all the way to $20,000. Still, the crypto market is very different now and, while retail flow still plays a big part, there are a lot more professional trading outfits in the market that utilize various crypto trading strategies, including technical and momentum-based approaches, as well as the fast-growing derivatives market. As such, at least on paper, the market should be a lot more efficient and equipped to handle such developments.

The underlying blockchain fundamentals remain somewhat mixed and, as such, many would argue that the recent run-up in prices will lead to an even sharper correction. However, even in traditional markets, equities do not necessarily trade in line with the well-established valuation models. This has been especially true in the aftermath of the 2008 financial crisis when the Fed, along with other central banks, turned to extraordinary measures to support the fragile financial system. The QE and the subsequent hunt for yield has severely distorted valuations.

The first major attempt to reverse the ultra-loose monetary policy efforts by global central banks is proving to be somewhat short-lived, the Federal Reserve is under increasing pressure to ease off the tightening pedal and the European Central Bank (ECB) has little recourse but to continue its efforts given the political uncertainty surrounding Brexit, together with the subdued inflation outlook. Crypto maximalists have been quick to point out that the macro tail risks, together with the looming risk on rally, to be driven by another wave of monetary policy actions, should be very positive for crypto assets. A few have gone as far as stating that pension funds should be investing in crypto given the potential for price appreciation. That may be a bold call indeed…