The local government of the Chinese city Guangzhou announced the establishment of a 1B yuan ($142M) blockchain fund. Each year the fund will choose two companies that develop “no-coin” public blockchains or federated blockchains and sponsor them with up to $1.4M and $425K subsidies, respectively.

The announcement was favorably received by the community, with Dovey Wan, the co-founder at Primitive Ventures, calling the initiative “HUGE for talent attraction and retention”. Although, it also raised some questions.

The announcement mentions “no-token public chains” in strict accordance with the Chinese pro-blockchain, but anti-cryptocurrency stance. However, a public blockchain without tokens probably would not exist, because it has no model of rewarding miners and nodes that maintain the network. 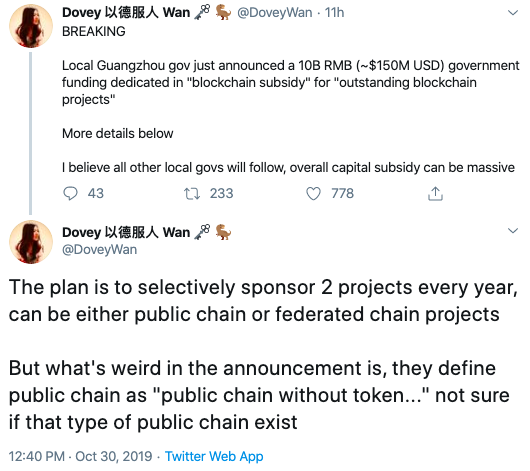 The announcement comes soon after the Chinese President pushed for blockchain adoption. As was reported by COIN360, the President’s comments led to a significant surge in prices of almost all blockchain-related Chinese A-shares.