How Strong Are Bitcoin Correlations?

Veteran trader Peter Brandt once called Bitcoin “a market like no other”. Perhaps, he was fascinated by the fast-changing nature of Bitcoin’s price. This particular feature (Bitcoin’s volatile price) may be a way to make money easily or to lose it. That is why traders are constantly trying to find connections between Bitcoin’s price and other indices.

In this article, we will consider Bitcoin price correlations with gold, yuan, the stock market, other cryptocurrencies, and even some other, unexpected assets.

Recent news regarding the correlation between Bitcoin and gold has led to heated discussion in the community with some enthusiasts going as far as to call Bitcoin “digital gold”.

In July 2019, Mati Greenspan, a senior market analyst at eToro, claimed that Bitcoin’s price correlation with gold had become significant over the previous month. 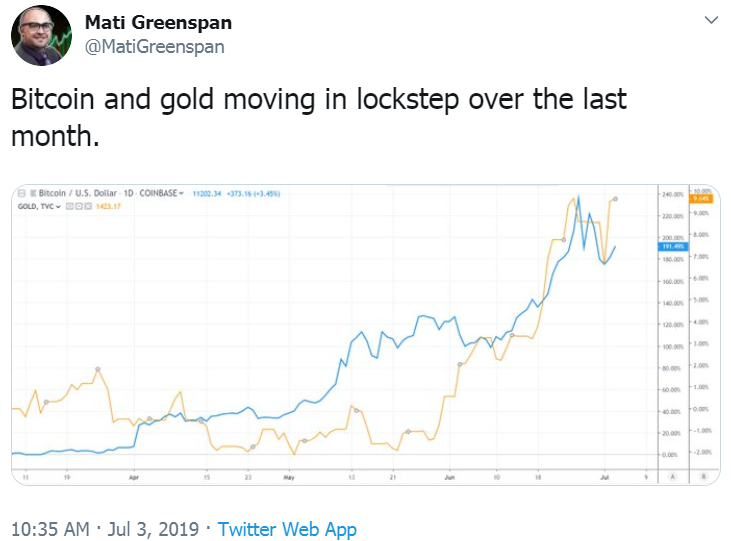 He added that the recent uptick in correlation brought it to its highest level (0.25) since 2016 (0.35). Back in 2016, UK citizens voted to exit the European Union, and this decision possibly contributed to the subsequent downturn of the British pound. When the pound went down, Bitcoin and gold took off.

According to a Bloomberg report from August 2019, the correlation between Bitcoin and gold has nearly doubled in the past 3 months. The Bitcoin-gold correlation hovered around the 0.496 level over the past year, but in just the past 3 months it has surged up to 0.827, which is very close to 1, the perfect correlation, meaning that two assets are moving in lockstep. Research suggests that in May, June and July of 2019, the two assets were moving in tandem nearly 58% of the time. 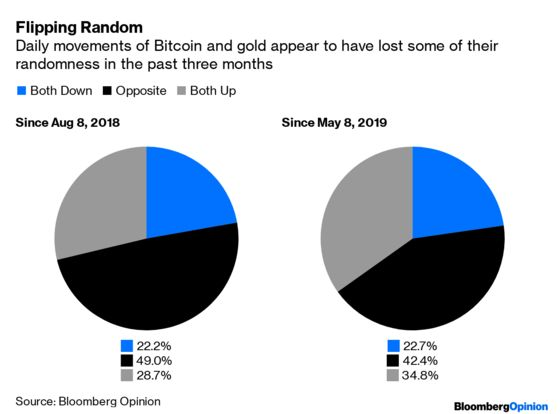 Daily movements of Bitcoin and gold by Bloomberg.

Unfortunately, Bloomberg didn’t disclose their methodology or data source, and the 0.827 correlation between Bitcoin and gold contradicts the data provided by Coinmetrics. According to their statistics, the correlation between Bitcoin and gold has never actually reached the 0.4 level. It peaked at 0.35 in June 2016, and then dropped off before climbing back up to 0.25 this past June. The numbers here (0.25 and 0.35) do not indicate a strong relationship between two assets; 0.25 is usually interpreted as a weak positive relationship and 0.35 – as a moderate positive relationship.

Despite the fact that the correlation figures are rather small, Mati Greenspan suggests that Bitcoin is finally becoming “more integrated with the rest of the financial markets” and “starting to respond to external factors”.

Earlier this month, Bitcoin’s price increased by 8%, from $10,960 to $11,800. The increase was believed to be the result of the ongoing trade war between the USA and China, and the Chinese yuan’s plummet which started in April and has recently been picking up velocity. On Aug. 5, one yuan was being traded for 0.14 USD (compared to $0.144 the day before), a low that hasn’t been seen in more than 10 years, since 2008. All this could be driving investors to shift money from the yuan to cryptocurrencies. As the chart below shows, the weaker the yuan is, the stronger Bitcoin is from April to July 2019. 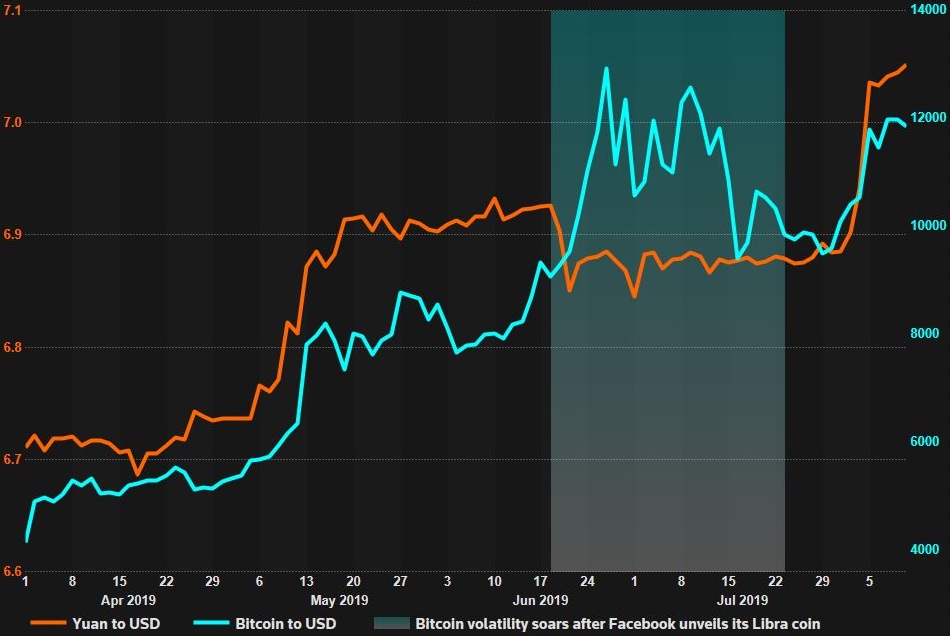 In the long term, though, the correlation is not so clear. Most of the time it is negative, but it only ever reached -0.2 once, back in 2013, which is considered a weak negative relationship. 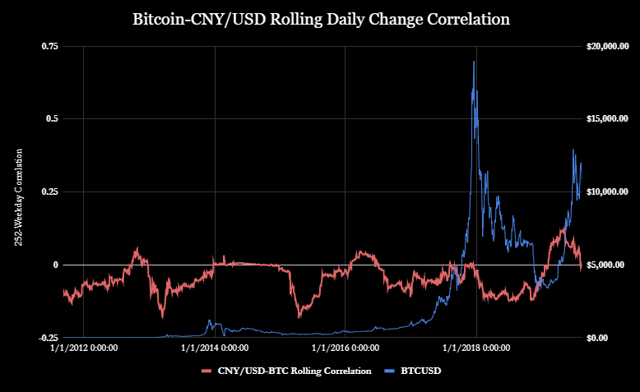 Bitcoin and the Stock Market

According to the chart, the highest positive correlations between Bitcoin and S&P 500 appeared in November 2018 and April 2019, but they charted at the 0.28 level, which indicates a rather weak positive relationship. Since May 2019, the correlation began plummeting and reached the -0.21 level in August, which indicates a weak negative correlation, meaning that the two assets are likely to move in opposite directions. The strongest negative correlation of all time (-0.32) appeared in November 2016; -0.32 is considered a moderate negative relationship between Bitcoin and S&P index.

In Q1 2019, the stock market rallied. It was announced that the Dow Jones Industrial Average (DJIA), which tracks 30 of the largest American companies, had surged 12% since the beginning of 2019. In the same period, Bitcoin had surged 44%.

In the following months, Bitcoin continued its rally. At the moment, its YTD price growth is 172%. As for the Dow Jones Industrial Average, it’s growth rate is almost the same as it was in Q1 2019 – 11.3%. Bitcoin, as a market like no other, has beaten every single stock in the Dow Jones index, leaving its competitors far behind. Even Microsoft, Cisco, Visa and American Express (all of which have seen rises of over 30% YTD) are no match for Bitcoin.

It would be remiss not to mention the surprisingly beautiful correlation Bitcoin has with a real-world asset. The asset in question is Mexico City Hass Avocado, and as noted by crypto-entrepreneur Jen Zhu Scott on Twitter in June 2019, Bitcoin’s and Hass Avocado’s prices mirror each other and have been for quite some time. 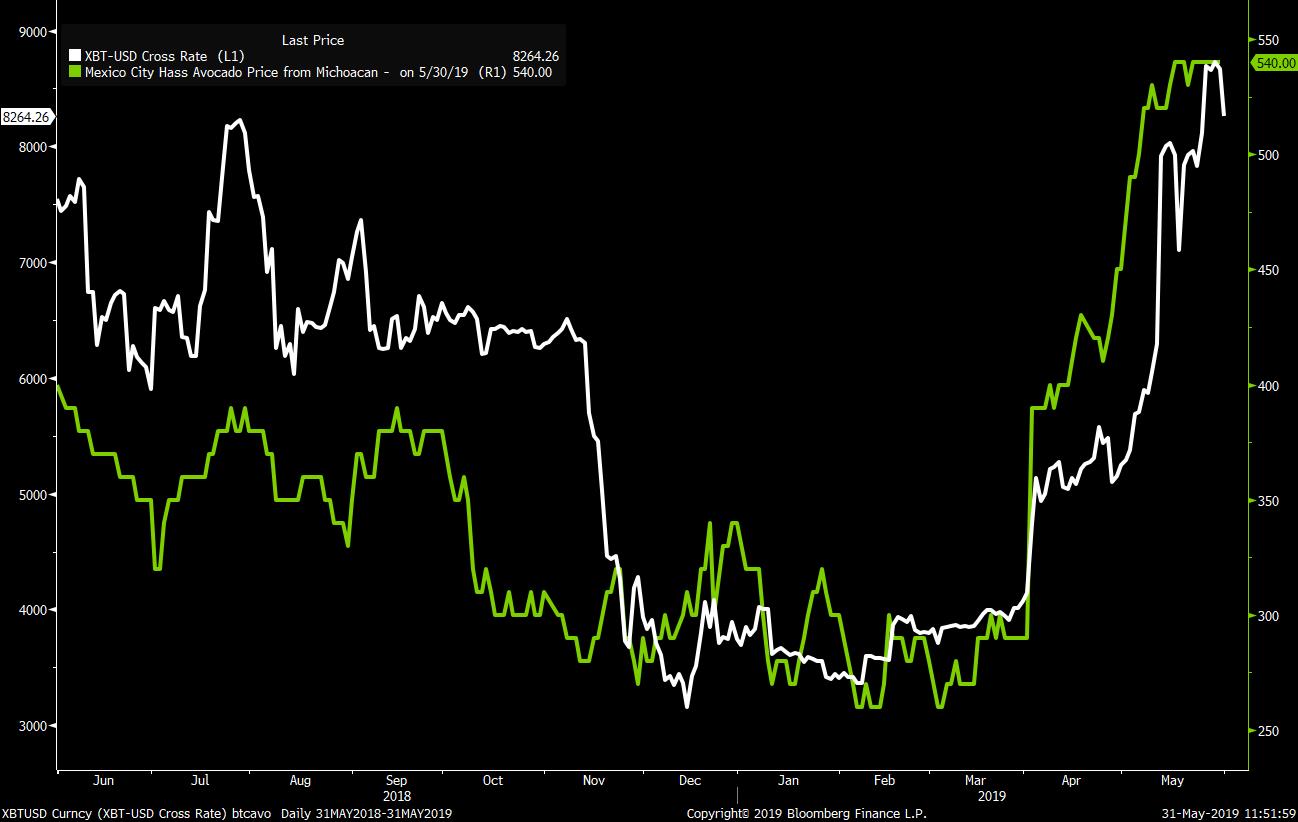 There is no clear explanation for such an extraordinary relationship, though some speculators suggest that millennials have been driving up prices of both avocado and Bitcoin. As we all know, correlation does not equal causation, and there might be no underlying reason for the connection. Remember the famous correlation between the number of pirates and global warming? Donald Trump may have also played a part in this, by raising import tariffs on Mexican goods by 5% every month, starting in June and maxing out at 25% in October. As the USA purchases around 75% of avocados from Mexico, the tariffs could be key to the correlation.

As the data shows, Bitcoin’s price correlations with most traditional stocks and indices are questionable. Some experts say that Bitcoin is maturing and becoming more integrated with other financial markets, but the data lacks concrete proof.

Bitcoin doesn’t look like it’s highly correlated with the traditional stock market. We always try to find correlations in everything we see, but often there are none. Is it actually a disadvantage? Tim Enneking, the managing director at Digital Capital Management, argues that, on the contrary, the absence of correlation to fiat investment classes has always been one of cryptocurrency’s advantages. He even claims that if Bitcoin got more correlated with traditional assets, it would make it a far less attractive investment.