Inflation, Where Art Thou?

Michael Lewis, the author of The Big Short, Flash Boys, and many others, once wrote: “The CDO was, in effect, a credit laundering service for the residents of Lower Middle-Class America. For Wall Street, it was a machine that turned lead into gold.”

One has to wonder what he would have written about Initial Coin Offerings (ICOs) and the cryptocurrency market in general; while the idea of a decentralized financial system makes perfect sense, once you enter the realm of consumer protection, the initial visions tends to get a bit blurry. Transparency may be the name of the game, but blockchain technology – alongside the newly formed and growing jargon terms of the crypto world, such as cold and hot wallets – is far from straight forward. Similarly to the CDOs, it is almost as if blockchain technology was designed to confuse and put off users from raising questions. And even if you had any, who do you ask? Hedge funds are just as opaque, if not more so than traditional money managers, while there is only a handful of cryptocurrency exchanges that pride themselves in fast response times when it comes to communicating with their users. So, if decentralization is something that the main street is willing to entertain only until things go wrong, and if the idea of cold storing your cryptocurrency assets means you have to Google every term you read in this last statement, what are crypto assets good for?

Inflation where art thou

The cryptocurrency ecosystem sustains a good deal of inflation considering it preaches an anti-inflationary stance and claims the actions of the world’s central banks following the 2008 global financial crisis will result in global hyperinflation.

In fact, the chart above only seems to offer support for the decisions of the Federal Reserve (Fed) and other central banks to slash interest rates and conduct non-conventional monetary policy actions.

It is true that central banks took unprecedented action amid the collapse of the financial system to revive the flow of credit and unfreeze lending to corporates, as well as retail markets. It took years of non-traditional monetary policy operations for inflation expectations to reverse the deflationary trends, and eventually, after much hesitation, the Fed began to return to “normality” and started to raise rates. Having slashed the rates to 0-0.25% in Dec’08, it took the Fed until Dec’15 to begin this normalization process with a 25bps rate hike. This process accelerated further in 2018, when the Fed raised rates four times. At the time of writing, the current Fed Funds rate stands at 2.25-2.50%.

While inflation may be a problem in a number of Emerging Market (EM) states, in particular the likes of Venezuela, which has been fighting hyper-inflation for some time, the inflation expectations across the Developed Market (DM) region remains well anchored and within the mandated target range. Going forward, inflation expectations for DM in 2019 currently stands at 1.9%, while EM is just above 5%.

More so, the latest dynamic across the bond market, particularly in Europe, has yet again revived fears of deflation, as evidenced by the recent dip in bond break-even rates. Unlike the crypto maximalists, central banks want to stay as far away from deflation or deflationary assets as possible. The Bank of Japan (BoJ) has been fighting to prevent the deflationary spiral from becoming entrenched for years, and its own non-conventional policy actions were one of the most aggressive ones, which included purchases of not just government bonds but also various ETFs.

On the other hand, in the cryptocurrency ecosystem, there seems to be much more inflation than is being communicated to the masses by the crypto media outlets. According to the latest data, Bitcoin (BTC) – the largest cryptocurrency by market cap – has an inflation rate of 4.53%, while Ethereum (ETH) has 5.36%, and the so-called digital silver, Litecoin, stands at 8.88%. Further up the scale, ZCash’s inflation rate stands at a massive 43.99%.

Within the traditional markets, these inflation rates can be compared to that of some EM currencies, but even then, double digit inflation rates are rare at best, don’t tend to last very long, and lead to social unrest.

The overall performance over the course of 2018 was disappointing to say the least. But the closing stages of the year saw one particular coin break away from the pack – Litecoin. 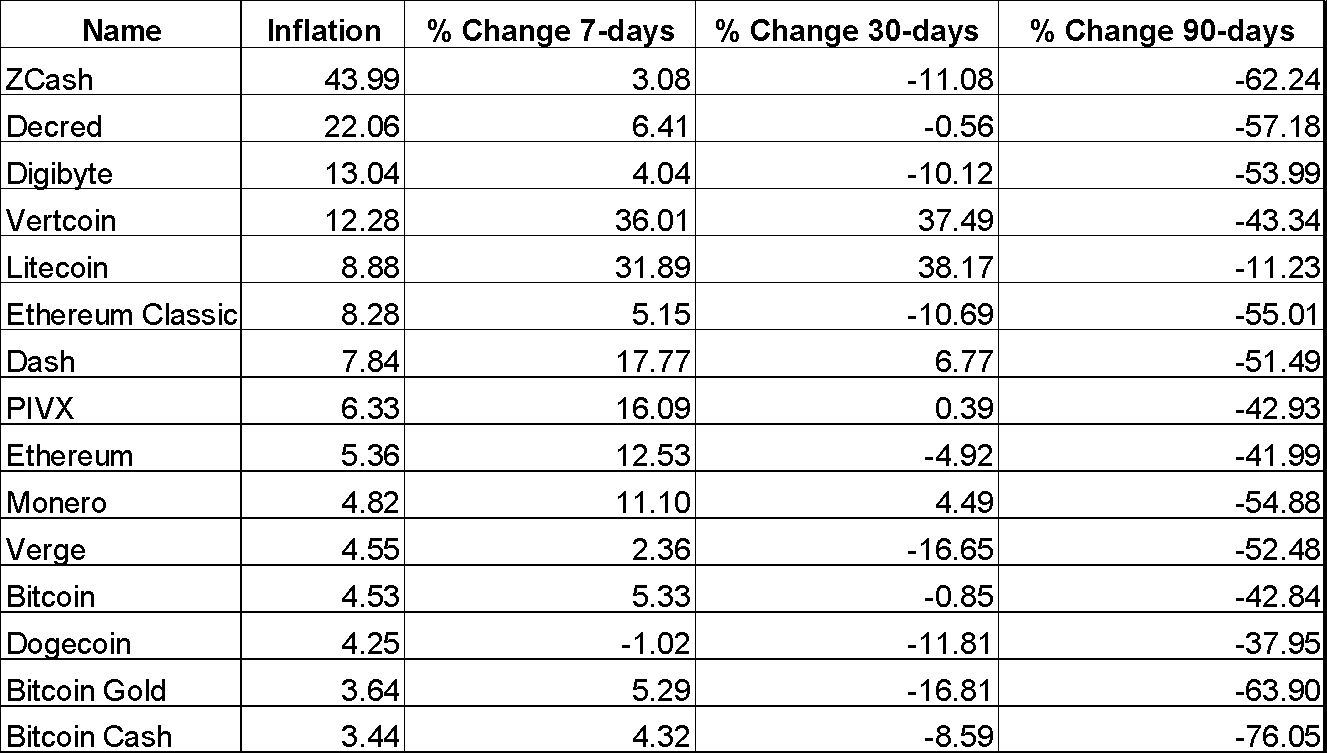 Further insight into the outperformance of Litecoin, including the take on planned reward halving, will be included in the upcoming publication. This particular summary will end on a somewhat controversial thought: what if central banks find a way to utilize or even improvise the dynamics of various crypto assets to stimulate inflation expectations, be that in certain states across the Eurozone or the US and even Japan?

In Japan, the second largest Japanese bank, Mizuho Financial Group, announced that it will launch a JPY stable coin by March 2019. While the release of other stablecoins have garnered more attention, the move by the Japanese bank may have a profound effect on the crypto market as a whole. Not only will the move allow the digitization of money and therefore lower the cost of goods by directly reducing and in some cases eliminating the transaction fee; it will also lower the merchant fees associated with the transactions. What’s more, the digitization of money will allow for a more seamless integration of digital assets, including crypto currencies, into our daily lives. In turn, one of the side effects of active usage of inflationary assets is these inflationary assets being accounted for when calculating the national Consumer Price Index (CPI). Ethereum, with its smart contract capability stands to be one of the biggest beneficiaries in the mid to long term, that is, in spite of short-term pressures such as general unease about market regulation, as well as lack of liquidity across the broader market.