After revealing late last month that the messaging app Kik would be closing, the company revealed yesterday that “Kik is here to stay”.

On Sept. 24, Kik Interactive CEO Ted Livingston announced they would be shutting down the messaging app to focus all of their resources into fighting a cryptocurrency-related lawsuit filed by the U.S. Securities and Exchange Commission (SEC). The company had been charged with conducting an unregistered $100M ICO for their token Kin, and is being forced by the SEC to label Kin a security.

In preparation for the aforementioned, the company closed the Kik X beta platform on Sept. 27 and decided to shut down the Kik app entirely (scheduled for Oct. 19) as well as reducing its team from over 150 employees to 19, among other things.

Several Kik users expressed their discontent regarding the announcement, with more than a few users advising the company to sell the app in order to keep it running.

On Oct. 7, however, Livingston took to Twitter to announce that they had signed a letter of intent (LOI) with another company to sell the messaging app: 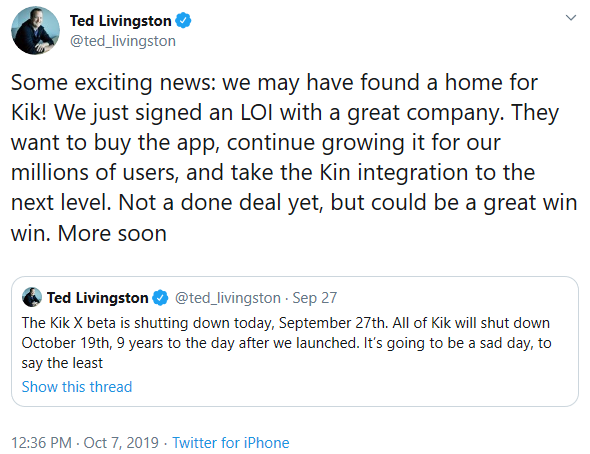 And on Oct. 13 the company announced that the app would, in fact, remain active, confirming the CEO’s previous statement.

The Kin cryptocurrency has been experiencing a consistent decrease in price. However, since the beginning of this controversy, the company has been clear regarding the future of Kin. The remaining 19 people in the company are meant to focus all their efforts on promoting the use of the cryptocurrency and creating real demand “by getting people to buy Kin to use it”. Before the news of the Kik messaging app’s closure, Kin allegedly had 2 million monthly active earners and 600K monthly active spenders according to Livingston.