Today Kik Interactive CEO Ted Livingston announced the closure of the popular messenger Kik, in order to “get through the SEC trial” over cryptocurrency-related charges. A few hours after the announcement, CoinDesk published a piece reporting that Ted Livingston “in a drunken text” shared his fears and intention to leave the company “in a misdirected message to the reporter”. Later today, Ted Livingston posted a denial on Twitter, calling the CoinDesk article “fabricated” and blaming the media-source for an “obvious mistake”. 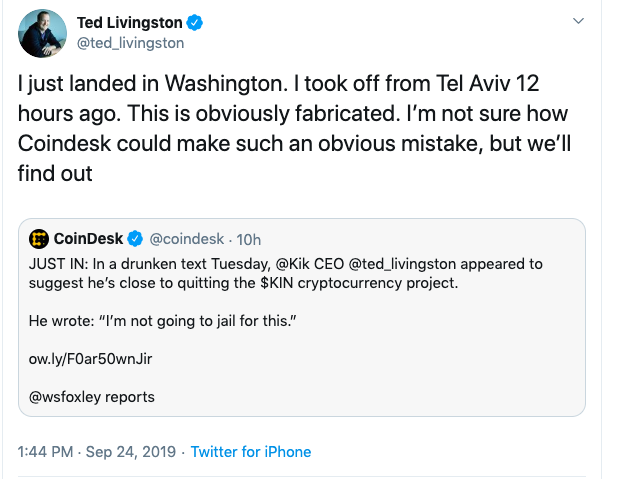 According to the initial CEO’s announcement, “After 18 months of working with the SEC, the only choice they gave us was to either label Kin a security or fight them in court. Becoming a security would kill the usability of any cryptocurrency and set a dangerous precedent for the industry,” so the team has decided to “fight” in court. Ted Livingston, the company’s CEO, has emphasized that in order to win the fight, Kik has to shut down the app, reduce headcount from over 100 to 19, and dedicate all resources to the matter:

“Instead of selling some of our Kin into the limited liquidity that exists today, we made the decision to focus our current resources on the few things that matter most.”

Livingston also highlighted that the US regulator used tactics that the team did not expect:

“While we are ready to take on the SEC in court, we underestimated the tactics they would employ. How they would take our quotes out of context to manipulate the public to view us as bad actors. How they would pressure exchanges not to list Kin. And how they would draw out a long and expensive process to drain our resources.”

A few hours after the official announcement, CoinDesk mistakenly reported that Livingston had shared his plan to quit the company with media:

Livingston could not immediately respond to this article, but later posted an answer on Twitter denying his intention to leave the company because of the ongoing legal action.

It reads: “I just landed in Washington. I took off from Tel Aviv 12 hours ago. This is obviously fabricated. I’m not sure how CoinDesk could make such an obvious mistake, but we’ll find out.”

Livingston’s official username on Telegram doesn’t match the account’s with which CoinDesk communicated, the media admitted.