Bitcoin’s daily volume accounts for billions of dollars, and it comes as no surprise that every day the blockchain sees multimillion transfers. Although, last week’s largest cryptocurrency transactions were exceptional: first, thanks to a large number of Bitcoins sent, second, due to low transaction fees.

Later that day, on Oct. 14, Xapo handled another large Bitcoin transaction worth $933M and paid a surprisingly low fee of 0.00046743 BTC ($3.90). As Bitstamp CEO Nejc Kodrics claimed on Twitter, the Bitcoins were successfully transferred “for the price of a cup of coffee.” 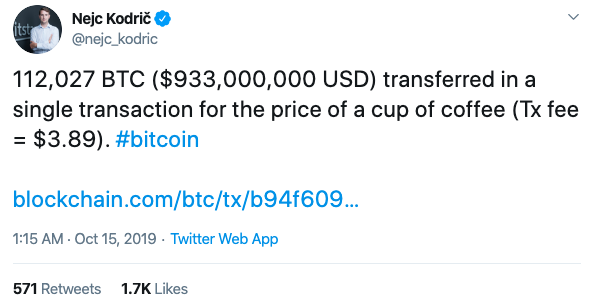 Most of the community was excited, though a skeptic on Twitter sent a witty remark that the coffee was cold by the end of the transaction.

On Oct. 17, an unknown whale transferred 9,999.999 BTC, or over $80M at that time, to the crypto exchange Binance. Although the exact reasons for the transaction were unclear, many experts suggested that it could indicate the investors’ willingness to get rid of their Bitcoins. Users on Twitter assumed that it was another pump & dump scheme, and asked Binance CEO which newly listed coin they are pumping this time. Unfortunately, they got no answer. 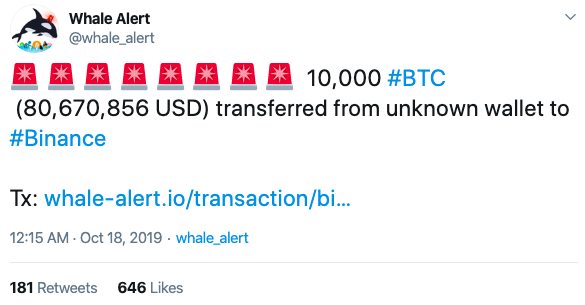 On Oct. 17 another large Bitcoin transaction was recorded, with an equivalent of almost $75M transferred for a 0.00016287 BTC ($1.3) fee. Later, Whale Alert reported that it was probably change. 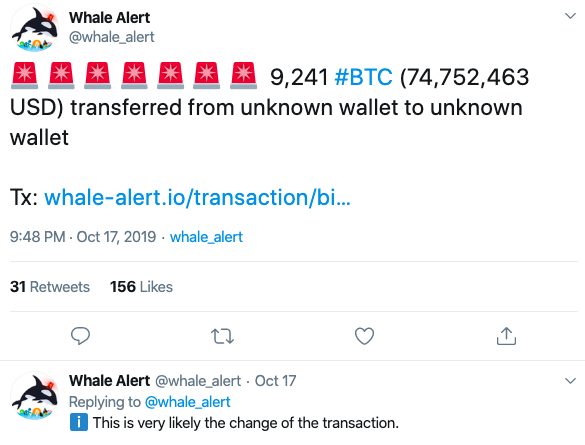 As suggested by the commentators, the real transaction value was just 80 BTC, while 9,241 Bitcoins remained in the initial wallet. According to the Bitcoin transactions mechanism, these remaining Bitcoins were sent to a special “change” address, and, after the 80 BTC transaction was confirmed, became available to their owner again.