Facebook’s Libra Association elected five people to serve as board members during its inaugural meeting in Geneva on Oct. 14. After 7 of 28 initial Libra Association members left the project, the remaining 21 members moved forward despite the recent regulatory pressure. As Dante Disparte, head of policy and communications for the Libra Association, claimed, “It’s a correction, it’s not a setback.”

The representatives of the remaining 21 projects became the initial members of the Libra Council, the body responsible for the governance of the Libra Association. During the Oct. 14 meeting, the council appointed a board of directors consisting of 5 individuals: Matthew Davie from Kiva Microfunds, Patrick Ellis from PayU, Katie Haun from Andreessen Horowitz, David Marcus from Calibra, Inc., and Wences Casares from Xapo Holdings Limited. David Marcus, former president of PayPal, current Vice President of Messaging Products at Facebook and leader of the Calibra wallet app, shared the news on Twitter: 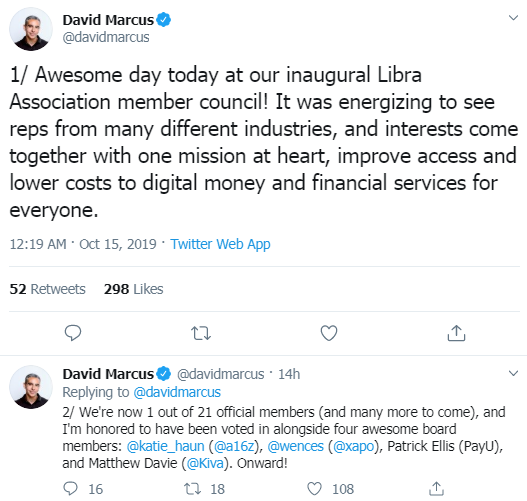 The board then voted on Association officials and appointed Bertrand Perez as Chief Operating Officer, Interim Managing Director Dante Disparte as Head of Policy and Communications, and Kurt Hemecker as Head of Business Development.

Interim articles to direct the association were also adopted, including rules for Libra governance, voting, the admission and termination of members, and resolving disputes.