Nassim Nicholas Taleb, a Lebanese-American writer, former trader, and the author of one of the most influential books “The Black Swan”, has shared that the shutdown of Lebanese banks in the midst of protests presents the “most potent case for cryptocurrencies”. 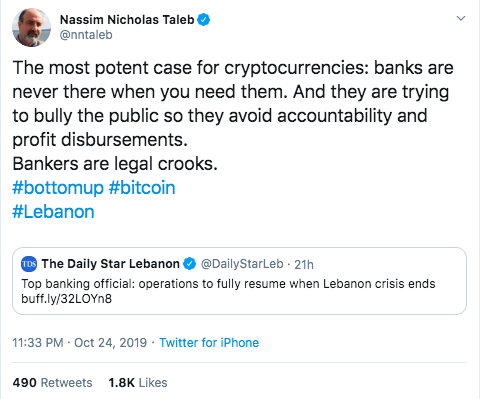 Nassim Taleb’s comment is referring to the fact that the Lebanese people have not been able to access their own money for a week in the midst of government protests. Yesterday. the Daily Star Lebanon reported that the banks will stay closed “until stability returns,” citing a banking association representative.

In Taleb’s opinion, bankers are “legal crooks” that bully the public “to avoid accountability and profit disbursements.” This, in his opinion, gives a real use-case for cryptocurrencies, which function without a middleman, or the bank.

Earlier in his essay, Nassim Taleb named Bitcoin “an insurance policy against an Orwellian future,” explaining that Bitcoin fulfills the needs of modern society exactly because “it has no owner, no authority that can decide on its fate,” in comparison to banks.