CEO of OKEx exchange, Jay Hao, has challenged the Bitcoin Transparency Institute to participate in 100 BTC-worth argument on Twitter after BTI published a statement claiming that 90% of the exchange volume is fake. Meanwhile, according to the suggested challenge, Hao will get the money from BTI even if the exchange happens to prove that at least 10%+ volume is real. 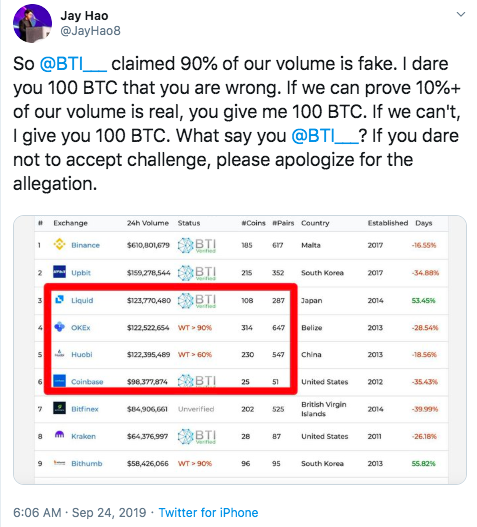 OKEx has already denied 2 days ago the allegations of the wash trading, mentioning that the Blockchain Transparency Institute simply uses the wrong methodology. According to the BTI’s surveillance report, “OKEx and Bibox lead the exchanges with the highest percentage of wash trading in a real ranking of the Top-40” and “fake volumes of these exchanges exceed 75%”.

The blockchain community was not convinced by OKEx representative arguments or the invitation for the challenge. For example, Alena Vranova, business strategist at Casa and co-founder of Trezor, replied to the CEO’s tweet: