The Web3 Summit, which took place on Aug. 20 in Berlin, saw the unveiling of Praxxis, a new quantum-resistant cryptocurrency, after six months of development. Most notably, the announcement was made by cypherpunk forefather David Chaum, the inventor of the world’s first digital currency.

In this article, we will take a deeper look at Praxxis, the person behind it and how it has been received by the community.

Who is David Chaum, the person behind Praxxis? 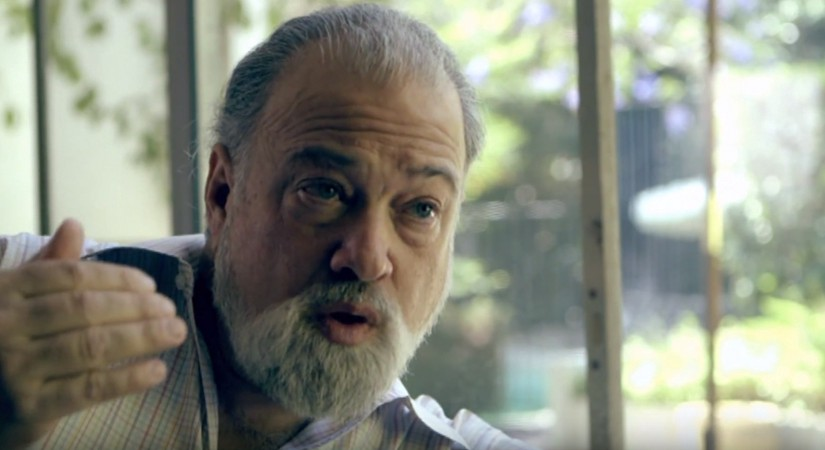 Chaum (64) has a Ph.D. in Computer Science and Business Administration from UC Berkeley.

People who have delved into the more technical aspect of cryptography or have followed the history of crypto might recognize Chaum as a very important figure in the field of cryptography and the cypherpunk movement. His seminal research includes his 1982 Ph.D. dissertation, credited as the very first proposal of a decentralized blockchain system. This work included elements that would eventually be featured in the Bitcoin whitepaper, with the exception of the proof of work consensus mechanism. The next year, he published a paper that resulted in the invention of the world’s first secure and anonymous digital cash. In other words, David Chaum is among the most experienced and renowned researchers in the crypto space. 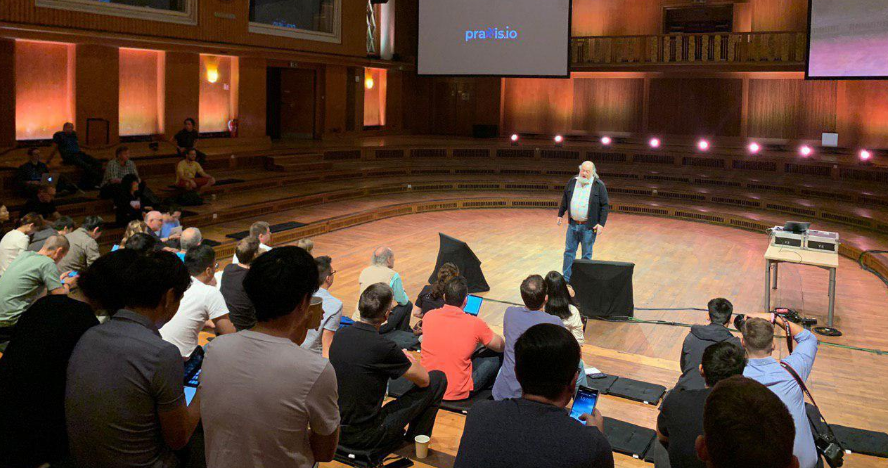 David Chaum announcing Praxxis at the Web3 Summit in Germany.

In a recent interview about the announcement of Praxxis, Chaum stated that blockchain technology has been the focus of his academic work since the late 70s due to his interest in digital privacy and data ownership. He elaborates by saying that adoption of privacy protecting technologies depends on whether people care about privacy or not, adding that recent user data leaks ultimately prompted him to revisit his work and come up with Praxxis: “a handful of us have cared for decades, but up until recently, that demand hasn’t existed en masse. It seems like we needed the “privacy Pearl Harbor” of the Snowden revelations and Cambridge Analytica to galvanize the masses’ demand for privacy.”

In order to fully understand Chaum’s influence and the Praxxis cryptocurrency, there are other contributions developed by Chaum that need to be examined.

eCash
Chaum’s idea of a system of anonymous digital money, first devised in 1983, would eventually see the light of day under the name of eCash in 1995. eCash was the world’s first digital currency, and it was used as a system of micropayments at roughly 10 banks across the US, Europe, Asia, and Australia.

eCash was managed by DigiCash (also founded by Chaum) up until 1998, when DigiCash declared bankruptcy and sold its assets. According to reports at the time, eCash failed because it struggled with adoption, and people preferred Visa and MasterCard for online purchases.

Elixxir
Elixxir was announced in September of 2018 as a blockchain solution in the form of a decentralized messaging and payments platform, allegedly capable of handling hundreds of thousands of transactions every second thanks to its consensus mechanism. In addition to this, Elixxir is also touted as a privacy-protecting platform wherein users can safely carry out transactions without leaving traces of metadata that could be used to track down and identify payments.

In its announcement, it was confirmed that Praxxis will leverage power from Elixxir. The way in which Praxxis purports to achieve scalability and shred metadata will be explained in the following section. At press time, no information about the release date of the Elixxir whitepaper is available.

XX Collective
In May of this year, Elixxir announced the launch of Prelixxir, a new app for members of the community to engage and participate actively in the Elixxir platform and early feature testing. With the release of Praxxis, Prelixxir became the XX Collective. The XX Collective acts as the central hub for the Prelixxir and Praxxis community, offering multiple meetups across the globe for followers of David Chaum’s projects.

Much like its sister platform Elixxir, there is currently not a lot of information available on Praxxis, as there is no roadmap or scheduled date for the release of its whitepaper.

According to its official website, most cryptocurrencies achieve a certain degree of success by making a cryptocurrency either private, fast or secure, but Praxxis will be the first one to achieve all three at the same time. Because of this, Praxxis will purportedly fully support the use cases of cash, thus becoming the first cash-like digital currency in the world. In this section, we will talk about how Praxxis will reportedly achieve privacy, speed and security.

Privacy
A big roadblock that stands in the way of privacy is metadata, or specific information that is left unencrypted on messaging protocols that can be later used as routing data to identify a specific user. Praxxis will leverage Elixxir’s use of the so-called mixnodes or mix networks—also devised by Chaum in the 80s—which reroute and mix metadata so it becomes hard to trace.

Praxxis will reportedly bolster privacy further by adopting a denominated coin structure where transactions and payments are broken down into individual coins that are then associated with other payments, making transactions even harder to trace. This will strip transactions in the Praxxis blockchain of their metadata, making it reportedly impossible for third parties to gather data about spending habits.

Speed
By making use of mixing services such as Chaum’s mix networks, blockchains can become more private, but they have to pay for that in increased processing time which makes them too slow to become realistically usable. To address this, the consensus mechanism of Praxxis uses a multi-party precomputation architecture.

With the new architecture Praxxis will supposedly be able to reach transaction volumes proper to a worldwide payments platform, with no centralization of power whatsoever. Additionally, transactions will supposedly be finalized without requiring validation from every single node. David Chaum stated in an interview that successive teams of nodes will be randomly selected in advance for the processing of future blocks. These previously scheduled teams will then be able to conduct multi-party computation in advance before the block receives any information, which will greatly expedite the processing time of each block once the information is received.

Security
Arguably the most aggressively marketed feature of Praxxis so far is their security. Among the wide array of cryptocurrencies available, there are multiple approaches that deal with issues related to privacy in transactions and low throughput, but Praxxis stands out as one of the only projects that offers security against quantum-level attacks.

By being quantum-resistant, Praxxis will be able to withstand high-profile attacks from hackers and even governmental agencies. In previous years, the idea of having quantum computers attacking a blockchain was unrealistic, but the probability of it becomes ever greater with the passage of time and newer developments in technology. Additionally, recent friction between several jurisdictions and the Libra cryptocurrency could mean very powerful new enemies for all cryptocurrencies.

David Chaum claims that longevity is one of the main design principles of Praxxis.

Media outlets have reported that, albeit interesting, the concept of mixing networks that obfuscate metadata will probably not be well-received by regulators. The heightened state of alert from regulators after the unveiling of Libra and the recent guidelines from the FATF have only made it more likely for this privacy feature to clash with regulators.

Reaction from the community has centered around the lack of technical information in the announcement. In a thread on the Monero subreddit, users were quick to point out the lack of information and vagueness of the announcement. Despite this, users also criticized the denominated coin structure of Praxxis as it could mean problems for transactions that are too small or too large, and speculated that the rest of the team behind Praxxis didn’t look very experienced. Similarly, many users have complained that their questions haven’t been answered in the Praxxis Telegram channel, mostly the ones related to the transition from Prelixxir to XX Collective. Many members of the community asked if the transition would affect their status within the app, as Prelixxir worked with rankings to grant access to the platform’s testing, while others asked if the Prelixxir cryptocurrency was going to be granted in the form of in-app rewards. However, the Prelixxir team only responded to the questions by asking for people to wait for the release of the whitepaper for more information.

One of the downsides of blockchain being labeled a revolutionary technology is the myriad of scummy startups and entrepreneurs that look at the cryptocurrency industry as nothing more than a fertile ground for making a quick buck. Because of this, many projects end up not living up to their hype, and cryptocurrency users eventually grow tired of constantly hearing about new projects that are picking up steam in the industry that end up amounting to nothing. For some, having somebody as established and respected as David Chaum behind the project is a good sign, but users who have criticized the announcement do have a point.

When asked about the future of Praxxis in an interview, Chaum chose the same course of action as Praxxis and politely stated that new information was going to be revealed soon. However, in another interview, Chaum stated that he finally decided to get involved with the industry only after Elixxir was working. One would be inclined to think that this would mean that Praxxis would only be announced once the technical specifications were defined and ready to be announced to the community, but for the time being, this doesn’t seem to be the case. It can also be argued that Praxxis is simply waiting to reveal all that information with the release of the whitepaper, but for now, we can only speculate. If Praxxis proves to be quantum-resistant, private, and fast, it might set a new standard for the future of blockchains, but we could also be looking at yet another overhyped project. Only time will tell.