The blockchain devices market is projected to grow from 218 million USD in 2019 to 1,285 million USD by 2024, with a compound annual growth rate of 42.5%, shared Markets and Markets research agency in their report “Blockchain Devices Market by Type”.

The launch of various hardware devices by such giants as Ledger, HTC, Filament, and General Bytes “helps to grow” the market and serves as a starting point from which Markets and Markets conducts primary and secondary research. Other main drivers of the growth include increasing usage in retail & e-commerce. The growing acceptance of cryptocurrency is expected to increase market capitalization and, as a result, venture capital funding. 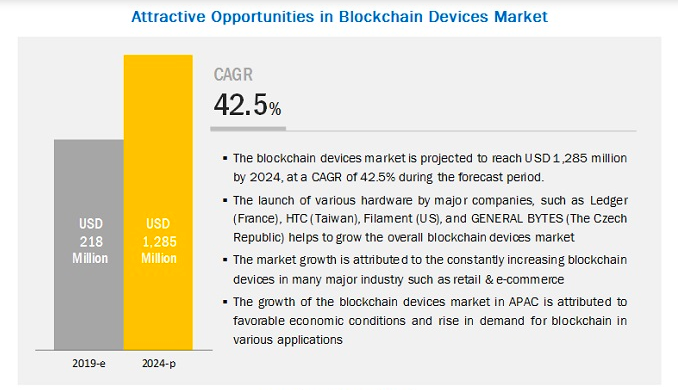 The most significant growth, according to Markets and Markets, will be attributed to connectivity devices such as blockchain smartphones, crypto hardware wallets, and PoS devices. The other most prospective types include gateways & pre-configured devices. Gateways devices will enable “corporations, governments, and institutions to bridge their legacy systems with the decentralized blockchain networks”. Pre-configured devices allow access to the blockchain network from a normal network and therefore, as expected, will see a high rate of adoption in various industries, including the financial industry, retail, and transportation.

According to the report, North America is an early adopter of blockchain devices and this region is supposed to dominate the market in 2024. The second-largest market is expected to be the Asian Pacific.