Heading into the upcoming CME Bitcoin futures expiry day at the end of this week, the cryptocurrency market is beginning to show signs of jitters. Although the path towards the psychologically important $10k level remains intact for Bitcoin, profit taking at this stage is not an unlikely scenario. However, something that would maintain the price momentum is the ongoing roll into the next futures contract. Specifically, open interest (OI) for the month of June stands at 1,996 (up from 1,316) and July at 432 (up from 303). In total, OI is at 5,190 (up from 4,804). The next few days will be telling whether the roll will accelerate further, which in turn would be supportive of the underlying sentiment.

Around 50% of the total CME Bitcoin futures open interest is set to expire (see CME contract table below) and the crypto market is expected to react favourably should market participants decide to roll the majority of the expiring contracts into the next contract window, since this would point towards “commitment” from institutional type accounts.

According to analysis by Diar, the number of wallets holding between 1,000 and 10,000 Bitcoins (BTC) has seen a sharp increase since the crypto market bottomed this winter, indicating significant accumulation during the price dip. As reported by CoinTelegraph, the analysis focuses on so-called “Firm Size” Bitcoin wallet addresses — defined as those holding between 1,000 and 10,000 BTC — and notes that such addresses now own over 26% of the circulating supply, or $36 billion worth of BTC. Back in August 2018, Firm Size addresses held under 20% of Bitcoin’s circulating supply, revealing a subsequent sharp accumulation of almost 7% in under a year. Aside from the above, it is worth pointing out that during the later stages of last year, the Bitcoin futures curve began to exhibit an interesting dynamic. Specifically, the December futures no longer exhibited backwardation (trading at a discount) and were trading on par with Perp/spot. What this meant was that long futures vs short perpetual trades still played out, especially as the cryptocurrency market went into substantial contango and the market is just now starting to get frustrated paying funding to shorts. 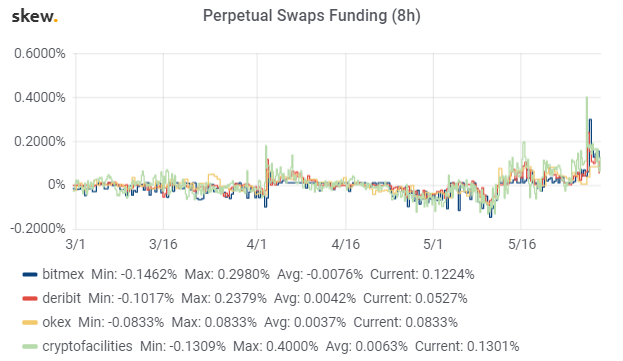 Elsewhere, after nearly two weeks of continuous voting, MakerDAO holders have agreed to initiate a decrease in DAI stablecoin fees. At present, there is over $400 million worth of ether backing a supply of roughly 80 million DAI. The original vote for token holders was announced on the organization’s blog on May 17, with a proposal to decrease the stability fee by 2% to 17.5% per year.

As it stands, the total amount of ETH locked in the MarkerDAO credit ecosystem is around 1.54%, which is down from 2.11%, its high earlier this year. The sharp rise in stability fees has proven to be a significant deterrent and brought back some stability to DAI, albeit at a high price which is now being gradually reversed. The move should further support the exponential growth of the Decentralized Finance (DeFi) market, especially given the favourable returns that can be achieved with relatively low effort and access to high leverage.

Remember the principles of carry trade – “The carry of an asset is the return obtained from holding it (if positive), or the cost of holding it (if negative)”.

Finally, and on a somewhat less optimistic note, Jason Calacanis, a prominent Silicon Valley investor who has helped companies such as Uber and Robinhood secure multi-billion-dollar valuations, has said the Bitcoin price is likely to drop to the $0 to $500 range in the long-term.