The Securities and Exchange Commission announced a penalty of $24 million for blockchain tech company Block.one, the EOS parent firm, as a settlement condition “for conducting an unregistered initial coin offering of digital tokens (ICO) that raised the equivalent of several billion dollars over approximately one year.”

The US regulator has found that the company has violated registration provisions of federal securities laws – the company did not register its ICO with the regulator and did not inform participants that they are offering securities. According to the press release, Block.one has agreed to pay the civil penalty “without admitting or denying” the SEC findings.

After all, the $24 million penalty represents only a small portion of the $4 billion initial sale and is merely 1.3% of the $1.817 billion of trading volume from last 24 hours. The blockchain community on Twitter seems to be of the opinion that the penalty is “ridiculously” small for an organization of that size. For example, Larry Cermak pointed out that the company spent $30 million to buy voice.com: 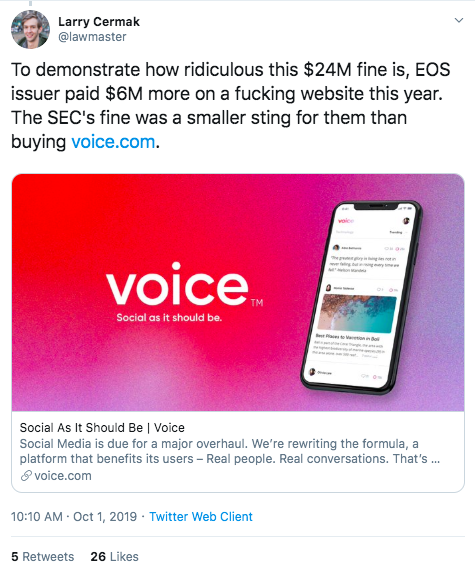 Co-Director of the SEC’s Division of Enforcement Stephanie Avakian stated that all companies that offer securities must comply with the federal law, “irrespective of the industry they operate in or the labels they place on the investment products they offer.” Her colleague Steven Peiken further explained the regulatory position in regards to information transparency:

“Block.one did not provide ICO investors the information they were entitled to as participants in a securities offering. The SEC remains committed to bringing enforcement cases when investors are deprived of material information they need to make informed investment decisions.”

To help investors navigate tricky compliance grounds, recently eight blockchain companies, including cryptocurrency exchanges Coinbase and Kraken, have joined forces to form the first system to rate crypto assets on their likelihood to “be classified as a security under the U.S. federal securities laws.”