This Tuesday Tether, once again, increased the supply of its stablecoin by minting 20,000,000 USDT, according to Whale Alert:

The history of USDT is full of coin burns and printing interventions. Yet, the total supply has been increased to 4,180,057,493 USDT, and USDT is, at the moment, the 6th coin by market capitalization. The latest USDT printings are happening both on the Omni layer and the Ethereum network.

To add fuel to the fire, according to TrustNodes, there are currently 100,000 transactions that are stuck on the Ethereum network. Users are complaining that transactions are taking hours or, in rare cases, even days.

“The culprit appears to be Tether. They’re now taking about 50% of the entire network capacity, with USDT handling $18 billion in unfiltered trading volumes, far more than eth’s $6 billion… According to Etherscan data, Tether has performed 100,000 on-chain transactions in the past 7 hours.”

On the other hand, a lack of clear supply politics increases skepticism among the blockchain community. For example, yesterday Tether’s donation announcement was met by criticism on Twitter: 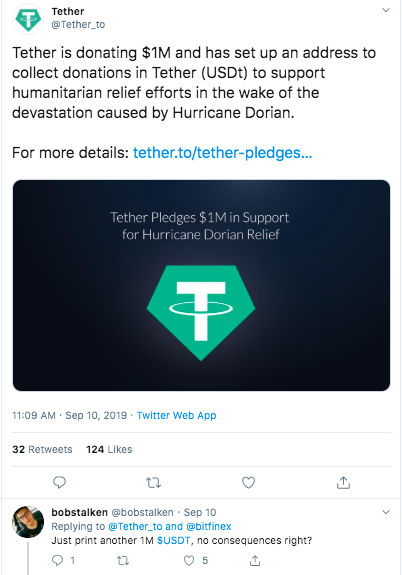 Earlier this week Tether also announced the launch of Chinese yuan-backed stablecoin CNH₮, which represents “a further expansion of Tether’s capabilities in facilitating the digital use of traditional currencies, such as US dollar (USDT) and euro (EURT)”:

“CNH₮ is pegged to CNH, and will initially be available only on the Ethereum blockchain as an ERC-20 token.”