The total amount of Ethereum locked in DeFi applications reached 2.4M ETH today, which is a new all-time high. The previous record was set in April 2019 with 2.3M ETH locked. 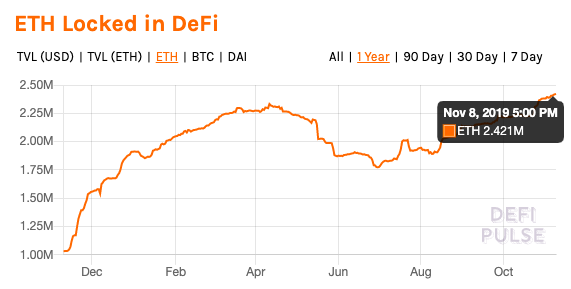 Maker (MKR), with its lending products, has the most Ethereum locked; its market dominance stands at 52% and it accounts for over $333M in total locked value. Compound and Synthetix account for $113M and $100M respectively.

At the moment, MakerDAO lending can only be used with Ethereum as collateral. However, as announced at DevCon 5 last month, MakerDAO would launch multi-collateral Dai on Nov. 18.

Meanwhile, MakerDao has hit a limit of 100M Dai and can no longer issue new coins. In this regard, the Maker Foundation Interim Risk Team placed a new executive vote proposal to raise the debt ceiling to 120M. The Dai debt ceiling has already been raised once: in July 2018 it was doubled from 50M to 100M. Also, the Foundation proposed to lower the Dai stability fee to 5% from the current 5.5%. The vote has just been executed with 59,877.85 MKR.