Almost exactly a year ago, a CNBC reporter wrote, in a skeptical tone, about a blockchain startup that had just raised 7.12M Ether (ETH)—equal to $4.1 billion and 7.22% of all the Ether supply at the time—“without a live product”. They were talking about Block.one. According to the report, investors didn’t even know how the majority of that capital would be used, but the Block.one ICO had already made more money than any of the year’s IPOs thus far. The story captured the crypto decade’s zeitgeist perfectly.

Since then, EOS has launched as a blockchain-based software for developers to create, host, and execute commercial-scale dapps, and closed up the sale of its native EOS tokens by June 2018. But little more activity came forth. Commentators were beginning to wonder what the company might be doing with the money, when the announcement for Voice—a blockchain-based social media platform—made headlines this week.

We discuss the EOS ecosystem and Voice, its effect on EOS’s price, and reactions to Block.one’s controversial decision to admit on ID control on the platform. What will be the impact of a blockchain-based platform in today’s controversial social media landscape? Will the mandatory ID checks for every user discourage the crypto community?

The EOS.IO platform is a blockchain protocol that supports the creation of dapps in a way similar to that of web-based applications. It provides secure access and authentication, permissioning, data hosting, usage management, and communication between the dapps and the Internet. It relies on a delegated proof-of-stake (DPOS) consensus algorithm and runs on multiple computer cores (i.e. it is multithreaded).

EOS token owners can use network resources and build and run dapps on EOS, in an amount proportional to their holdings. Holders who are not running apps can allocate or rent their computing power to other users. 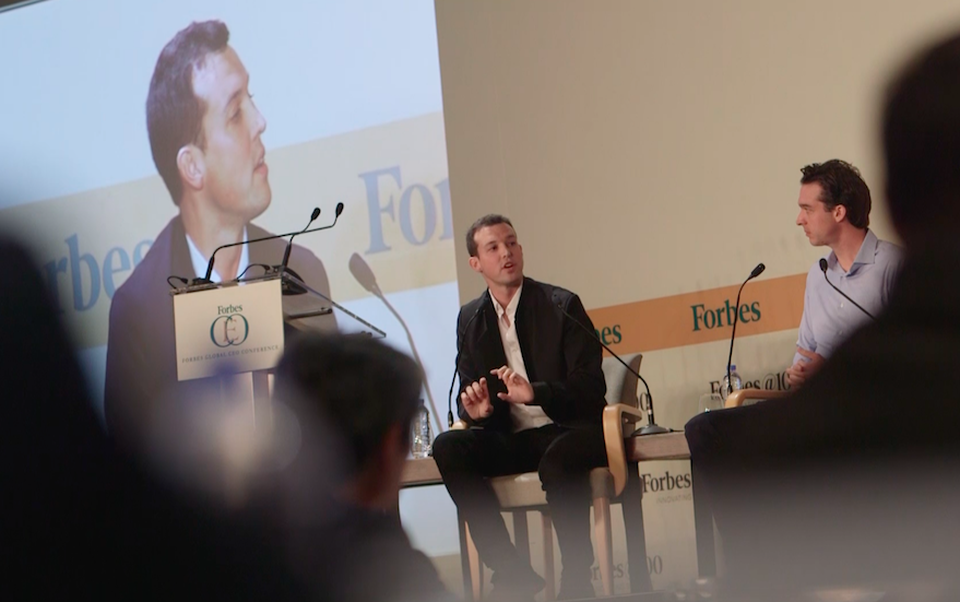 Blumer speaks at a Forbes conference in 2018.

Block.one’s CTO, Daniel Larimer, had already founded the P2P platform and decentralized exchange Bitshares, and the tokenized social platform Steemit, before co-founding Block.one in 2016. A personal crisis in 2017 drove him to heavily question his Christian upbringing, leave a career in the U.S. military-industrial complex, and start one in crypto. "Philosophically, I wanted to move from working on weapons of destruction to creating systems that could help provide life, liberty and property for mankind," he told Forbes. 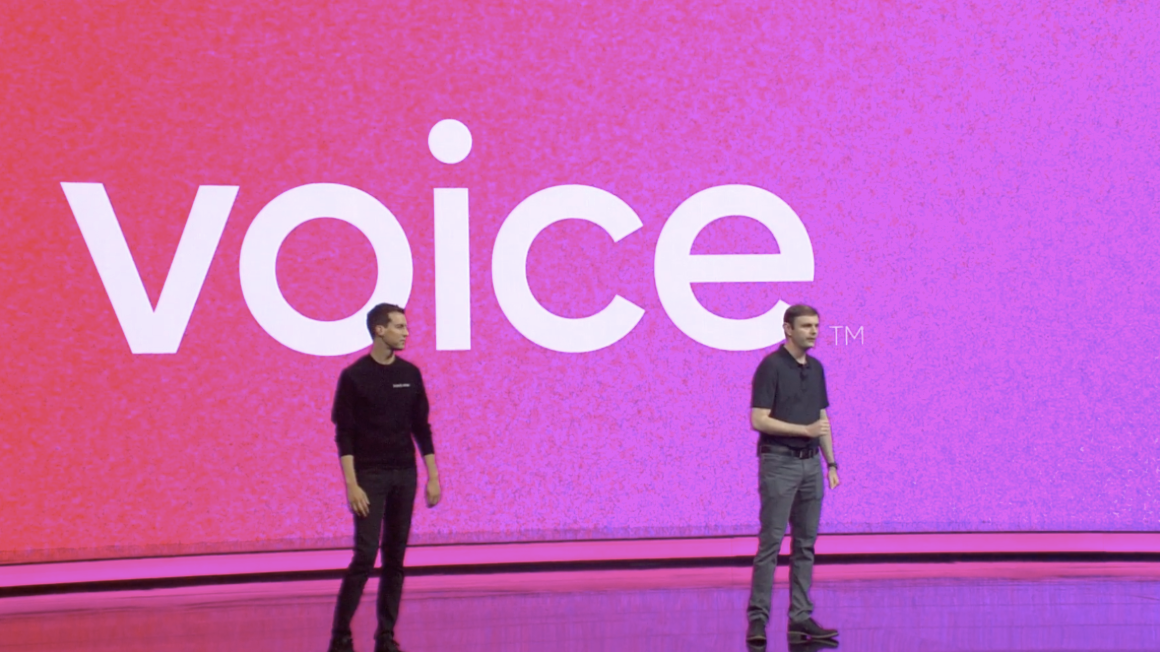 Voice is a social media platform that will use the EOS public blockchain to record users’ posts, distribute shared and promoted content, and reward users for sharing, with Voice tokens.

The premise behind Voice is that a self-sustaining economy of content, ideas and data will keep value within the community, benefiting the users and not corporate interests.

Block.one claims Voice will bring “alignment and transparency” to a social media that is nowadays “fundamentally broken and in need of a complete overhaul.” In 2019, this reads quite clearly as a commentary on platforms like Facebook and its subsidiaries—Whatsapp and Instagram—who have, since last year, been at the center of intense criticism for their unethical data harvesting practices. “By design, [social media platforms] run by auctioning our information to advertisers, pocketing the profit, and flooding our feeds with hidden agendas dictated by the highest bidder,” said Blumer. “Voice changes that.”

The company’s announcement highlighted the public and transparent nature of all interactions that will occur on Voice. “Everyone–the user, the contributor, the platform–by the same rules. No hidden algorithms, no invisible interests” reads a post on the Block.one blog.

Blumer failed to describe in full detail the exact mechanisms through which Voice will keep bots and troll accounts at bay as promised (we discuss this again in the section Controversy). Larimer did, however, mention that “everyone who signs up for Voice will get an EOS account.”

The company also took the opportunity to announce an EOS.IO Version 2. The upgrade will introduce EOS-VM—a WebAssembly Engine—an update that will speed up smart contract processing twelve-fold. With its V2, EOS will also become the first blockchain protocol to adopt WebAuthn authentication standards. Read more about this in the following section.

A partnership with Coinbase was also announced. The new joint Coinbase Earn program seeks to educate Coinbase users on the EOS.IO software through online classes in an “earn as you learn” setup.

##Voice Tokens As explained on Voice.com, users will earn Voice tokens when others like their posts. When you earn tokens, your post gains visibility. In a cycle, the more popular your post is, the more tokens you earn.

Larimer answers questions in a Telegram Q&A about Voice.

According to Larimer on a Telegram Q&A, once users earn Voice (and every new user gets some for free), they will be able to stake their tokens to move to the top of the comment chain: this is called Voicing a comment. If someone else stakes tokens to go above them, the first user would get their tokens back.

Not much more than this was explained during the announcement, but Larimer did later take to Telegram to answer users’ questions. One of the more pressing ones is, how exactly does Voice plan to be more equal than other platforms, including Larimer’s own creation, Steem?

In short, because each person will only get one vote. This is why the KYC measures are necessary.

Larimer explains a key difference between Steem and Voice.

Controversy: Voice Does Not Allow Anonymity 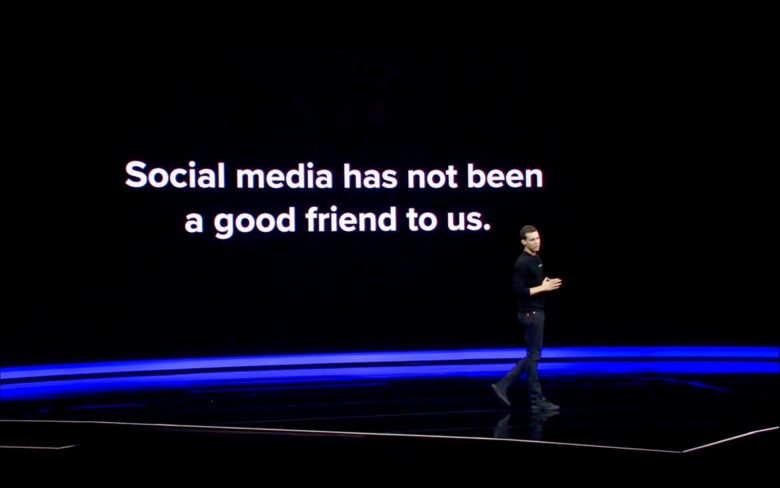 Blumer lashed out against social media platforms at the Jun. 1 announcement of Voice.

In the announcement, Voice delivers a clear message against the surveillance-capitalism style of Facebook. Up until a certain point, that is.

At a superficial glance it might seem like Facebook and Block.one are moving into each other’s territories, coming closer together, or becoming more alike: while Block.one is making incursions into social media territory, Facebook wants to launch its own cryptocurrency. But the two company’s declared intentions are actually opposite. Facebook CEO Mark Zuckerberg has stated (here) that his own platform will be heading towards a more “privacy-focused vision for social networking,” which contrasts with Voice’s everything-is-public approach to social media.

But commentators online are wondering: at the end of the day, and in spite of the spins they put on their products, are either of the platforms really in the business of protecting users’ privacy?

In order to weed out bots and spam accounts, Voice includes a “special authentication system.” This effectively means that each and every user will need to pass KYC identification processes. This is where the EOS update comes in. As mentioned, Block.one would integrate with WebAuthn, a password-less standard recently approved by the World Wide Web Consortium (W3C), an entity which regulates the worldwide web. This will possibly be the only or main identity control on Voice. 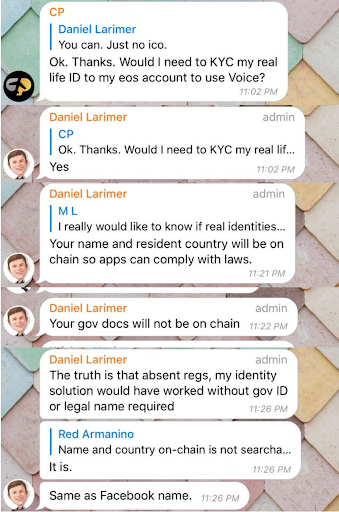 The Block.one team seemed to slam other social media platforms harshly for their treatment of user’s personal data, but Voice will own some of your personal data as well.

It seems the choice users will have will be to either remain anonymous and have their content owned by the platform, or compromise their identity and get the chance to be in control of, and “sell” their own content.

The only thing we can safely say, however, is that not enough official information has been revealed to make many objective judgments on Voice’s treatment of users’ personal data.

Jokes Aside, How is Voice Different from Steem?

Other blockchain companies that run social media platforms include Kik Interactive and Dan Larimer’s very own Steem. In the past, Larimer himself had teased Voice as a Steem 2.0. Because information on Voice is scant, the online community can only take preliminary guesses at how Voice might be different from its older sibling.

Steem user liberosist speculates about the difference in the following ways (available here):

1) Voice eliminates Steem’s stake-weighted system. By verifying users’ identity, either just through WebAuthn or other mechanisms.

2) Voice eliminates regressive economics: Steem's stake-weighted system inadvertently incentivized concentration of wealth, but since Voice will not hold ICOs and will, apparently, distribute tokens only for social media activity, the system could potentially be more fair. The risk, however, is hyperinflation.

3) Gamification, or bidding for advertising. There's a cost to advertising yourself, but there's an addictive game to play. There may be no conflict of interest between investors and content creators like there is on Steem.

4) With its ID control, Voice seems like it will be more moderated than Steem. Some people will surely like this, while others, featured in the images above, will cringe at the thought.

The general opinion seems to be that Voice is not in direct competition with Steem. Steemit is seen as a small dapp competitor—it could go up against dapps that are on Steemit—but not a direct threat to Steem.

Blumer and Larimer do not seem worried about user adoption for Voice, as they have shown in comments like the ones below.

Blumer seems confident on Voice’s adoption in a Telegram Q&A.

When asked how they would get influencers on board, Blumer responded they will take a direct contact approach.

Voice will be directly marketed to mainstream channels, says Blumer.

To gauge just how much traction Block.one has and consider whether their optimism is justified, check the following stats.

Block.one claims that EOS.IO software is consistently the most used public blockchain platform in the world, “accounting for upwards of 70% of all blockchain activity”.

According to Bloomberg, Block.one has $3B in assets (cash and investments) at the end of February (based on an email from Mar. 19 that Block.one sent to its shareholders). The publication reports that Block.one holds as much as 140K bitcoin. 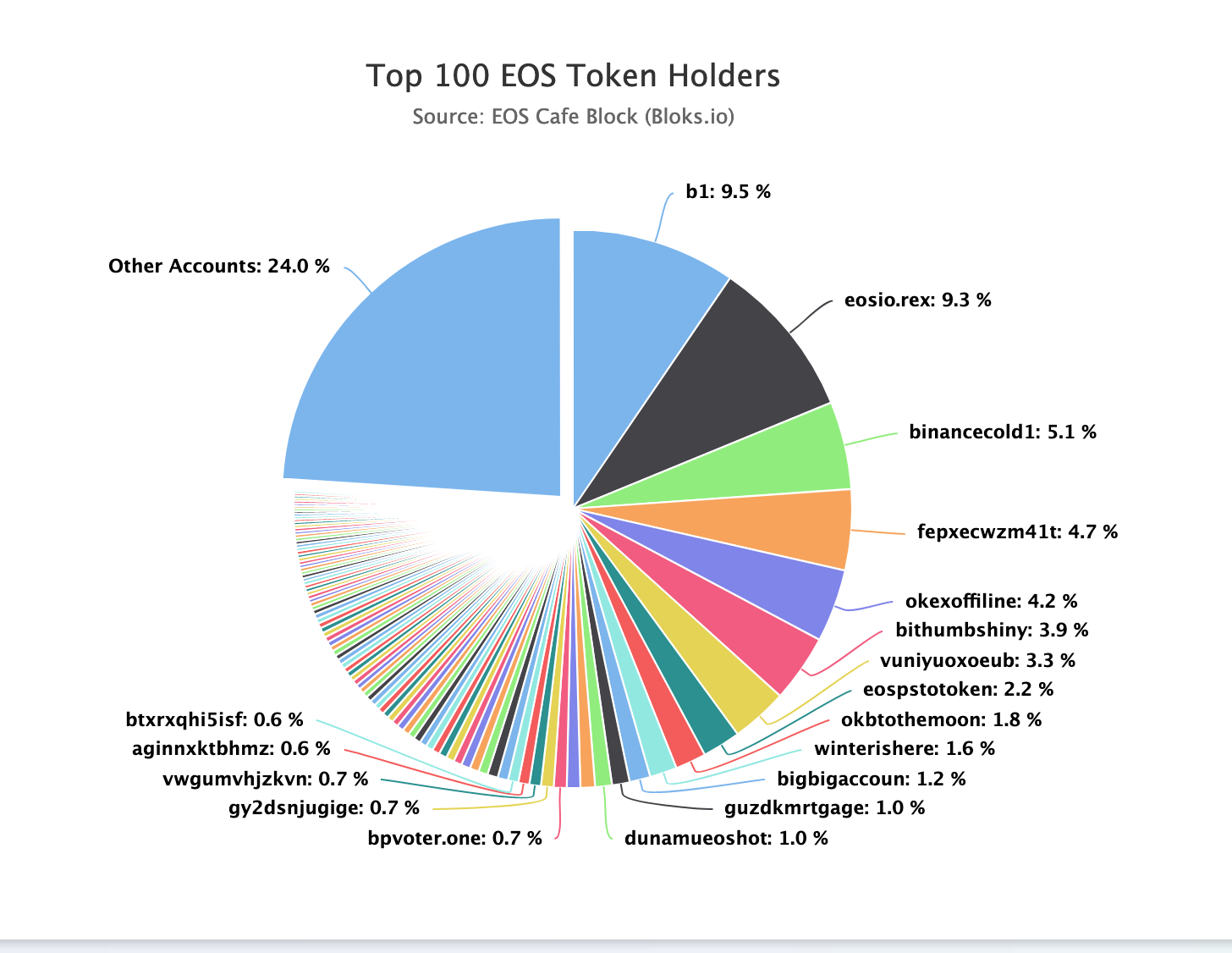 EOS tokens were supposedly distributed in the following way:

Who Invested in Block.one?

According to this news outlet, Block.one’s private buyback offer is valued at around $2.3B and will return as much as 6,567% to its earliest investors in less than three years. 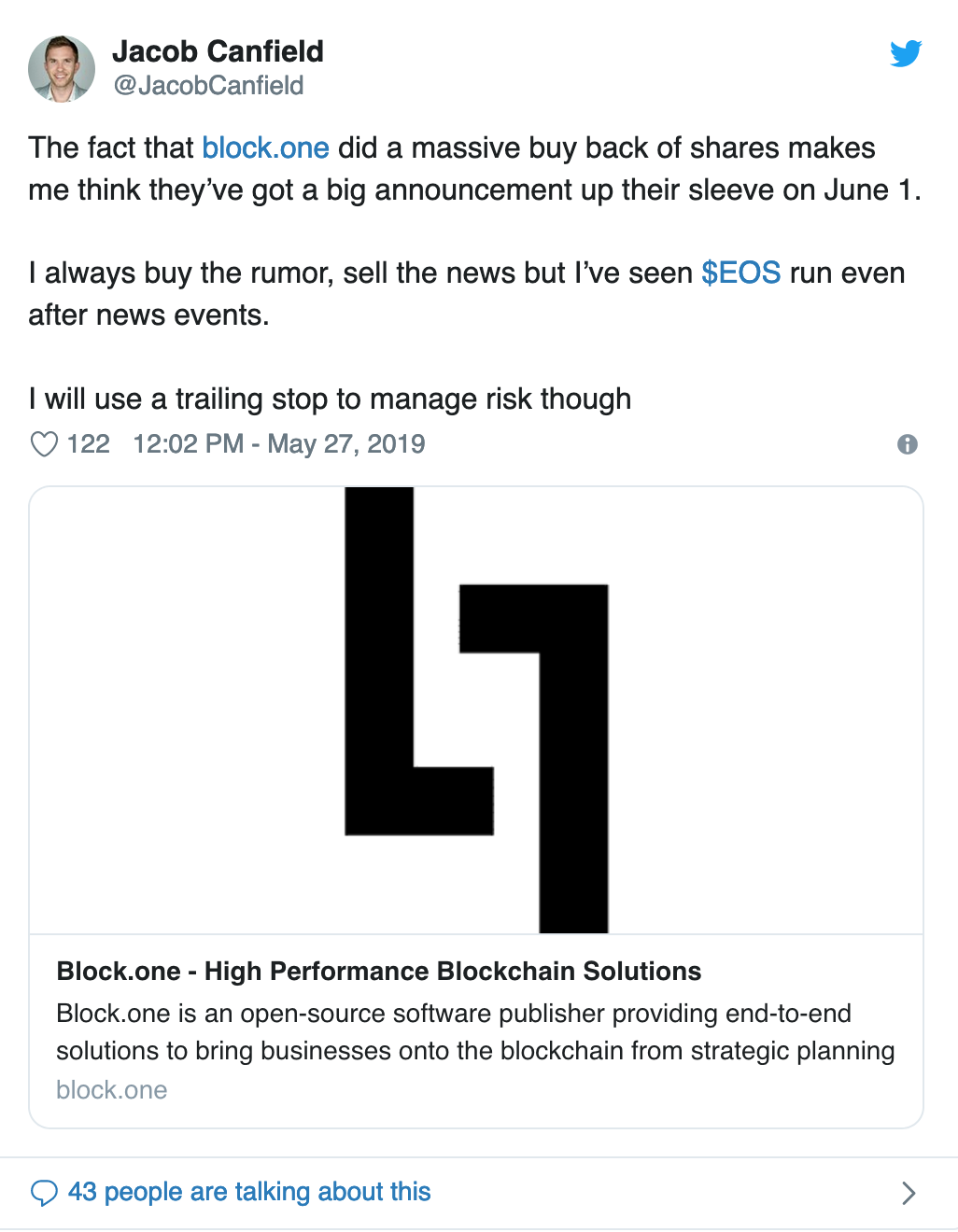 Traders took the buyback as a sign that something was coming.

Voice’s announcement was highly anticipated, and traders truly bought the rumor and sold the news. There were absolutely no details available other than the fact the announcement would have something to do with social media; though Block.one’s purchase of $20M worth of RAM on the EOS network only escalated the hype. 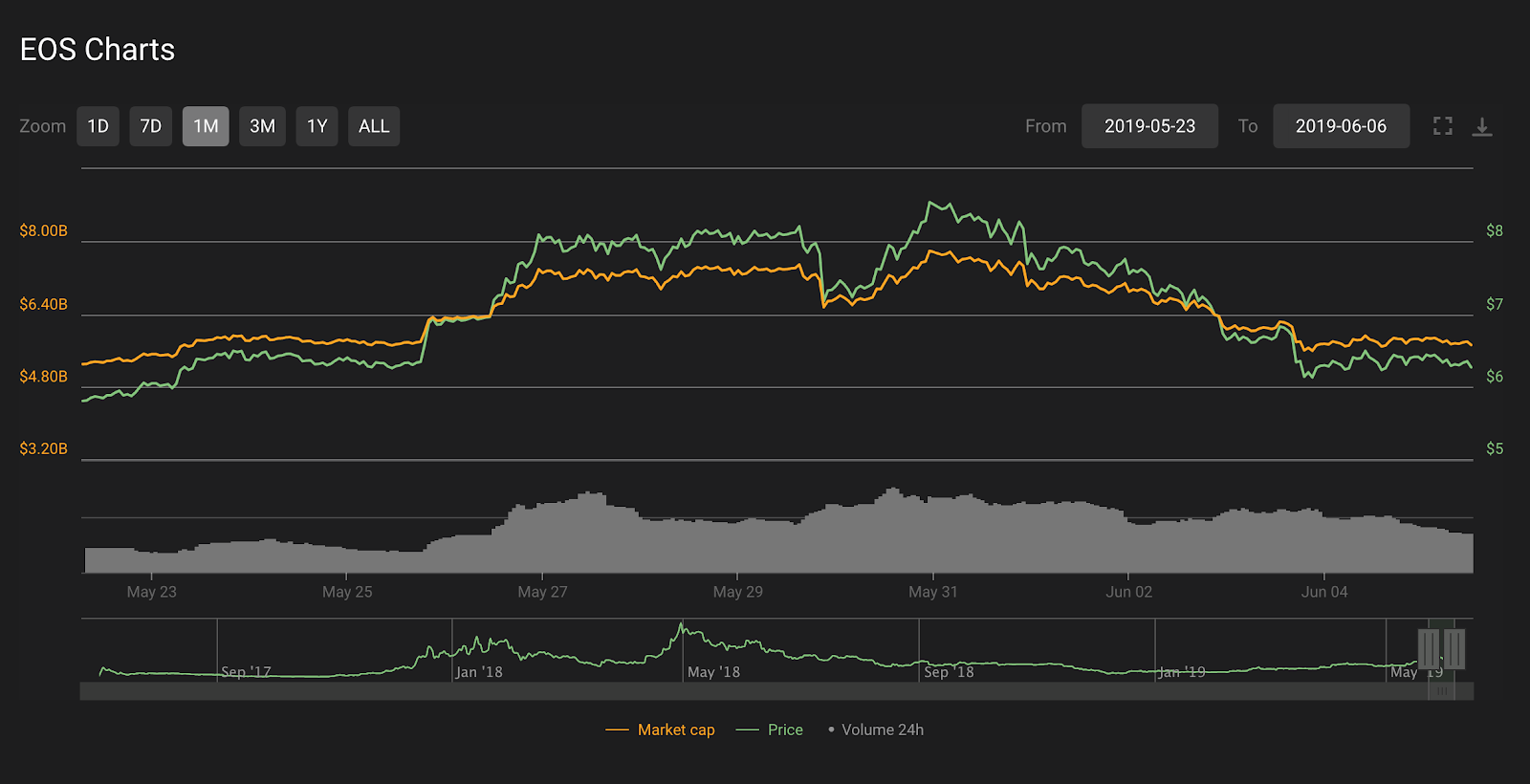 EOS’s progress from May to Jun. 5. The coin tanked following the Voice announcement.

But as soon as Jun. 1 came around the corner and, with it, the much hyped announcement of Voice, EOS started tanking. The steep fall bottomed at $6.15 on Jun. 4—the coin lost 27% in just four days. At press time, the price of EOS is $6.49.

Voice intends to take a stand against social networks like Facebook, by safeguarding consumer data and preventing algorithms from “dictating what we see”.

But, are we trading one kind of freedom for another? There are many in the crypto community who have already made peace with KYC measures, since so many major cryptocurrency exchanges demand it. If you are interested in EOS and Voice tokens, chances are, some exchange already owns your ID data. Still, others are disappointed with this solution.

Another problem is whether or not the team’s ambition of “fairness” and “equal voice” in a platform where popularity is tokenized, is gullible. Although votes are not buyable on the platform, they are transferable. The purchase of votes can happen on a separate market, outside of Voice. What’s to stop those with more money from staking more tokens and pushing certain voices down?

As always, thanks for reading.
The COIN360 Editorial team.