February 07  |  7 min read
What Crypto Can Do For The Sports Industry, Part 1

What Crypto Can Do For The Sports Industry, Part 1

What, if any, is the overlap between real-life sports and cryptocurrencies? Unsurprisingly, there are advantages for both parties in the sport-crypto relationship. The following is part one in a two-part article brought to you by Modern Token, the blockchain advisory firm. You can read Part 2 here.

Throughout the ICO hot season entrepreneurs have been trying to introduce crypto literally everywhere – from oil mining to digital marketing. In the entertainment, crypto projects were mostly centered around sports betting, fantasy and e-sports. However, the sports industry wasn’t left behind. And in our view the latter bears more potential than most of the ‘yet-another-application-of-blockchain-to-whatever-comes-to-mind’ flooding the crypto market.

As the classic ‘chicken-and-egg’ problem of building the community from scratch is not an issue in sports, it has become a promising take-off point for crypto mass adoption seekers. In broad strokes, there are several ways of how crypto is meeting the sports industry: 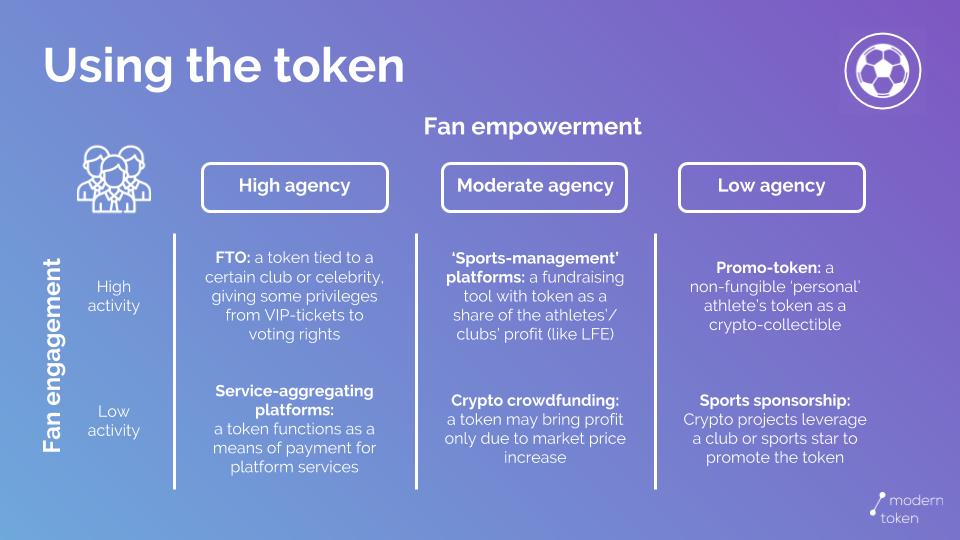 Crypto is a good tool to handle sports crowdfunding easily no matter which part of the globe a fan is.

It traces back to 2014. The Jamaican bobsleigh team made it to the 2014 Sochi Winter Olympics after raising $30,000 in Dogecoin, which was an unprecedented event for both real sports and crypto industries. The Dogecoin community on Reddit also raised $55,000 in tokens to wrap the car of NASCAR driver Josh Wise.

The crypto crowdfunding has resonated with the next-generation crowd sponsorship and quantifying athletes practice, which are among the top five sports-tech trends in the year to come. One of the first attempts to amalgamate these both trends was ‘sports token’ sporty.co, that allowed professional investors, fans and general crowd to crowdfund the needs of promising athletes by getting interest in their future income. TokenStars is a similar platform which combines the features of a sportsmen crowdfunding tool with betting service and athlete management platform curated by a community in a decentralized manner via voting and auctions.

Another project, the London Football Exchange (LFE) ‘hopes to cash in on the cryptocurrency craze by democratizing club ownership’, says Ben Leigh-Hunt, LFE’s main board advisor. The LFE, having collected $73M on token sale, aims to become a one-stop shop for clubs of all sizes to raise capital via blockchainized public equity sales and offer LFE contributors a wealth of fan experiences and social interaction.

These precedents paved a way for sports clubs and famous athletes to pay attention to crypto throughout the ICO wave.

Crypto as a marketing tool

Sports sponsorship is a powerful marketing technique for a brand to form the association between a company (sponsor) and a sports club or athlete (sponsee). No surprise, that sponsorship was largely picked up by crypto entrepreneurs as it should have helped to promote tokens among large celebrities’ fan networks.

2018 has seen several crypto-related acquisitions as well. This summer Heritage Sports Holdings (HSH), a UAE sports investment firm, has acquired a quarter of Italian soccer team Rimini FC in Quantocoin. Heritage Sports Holdings also owns Gibraltar United, a football club known to be one of the first to pay part of the wages to its players in cryptocurrency. Closer to Christmas, another buy was made: the Dutch sports-cryptocompany Libereum acquired a Spanish soccer club Elche CF.

But it’s not only soccer sponsorship that drives the expansion on crypto topic in sports. In October the British Masters golf tournament was sponsored by LIFElabs (⅓ of the LIFEtokens are set aside for investing in philanthropic causes).

Sport celebrities in the game

Many sporting legends have been included in promoting the combination of cryptocurrency and sport. Among them are boxers Floyd “Money” Mayweather, Mike Tyson and Manny Pacquiao, and plenty of soccer players that includes Lionel Messi, Didier Drogba, Luis Figo, Michael Owen and others. In May 2018 MMA fighter Mei Yamaguchi from Japan was set to fight Angela Lee for the Atomweight World Championship title and was sponsored by Bitcoin Cash promoter Roger Ver.

Brazilian football legend Ronaldinho has even gone as far as creating his own crypto. The Ronaldinho’s Soccer Coin (RSC) project aims to develop soccer globally including poorer countries by using the creation of VR soccer stadiums to help coaching techniques. However, a week since the public round started the sale was ‘temporarily’ stopped and the whole project appears to be paused. Colombia's James Rodriguez has also issued his own cryptocurrency to promote a crypto company (SelfSell app) and Belgium's Eden Hazard and Sergio Aguero are promoting another ‘sports-chain’ project .

Collect your players, play with your collection

Some use of crypto in sports can come as a surprise — for instance, American sports exploring a niche of crypto-collectibles like Cryptokitties :

These tokens cannot be used as a mean of payment but just as a medium of athlete collectibles, that can be seen as an attempt to raise public attention to crypto and a real-life embodiment of crypto-kitties.

This has been part one of Modern Token's revision of crypto in the sports industry. Stay tuned for the second installment, which discusses how sport clubs and leagues can leverage the blockchain as a unified payment system for fan-oriented services.

Written by Aleksandra @Coreference, a market researcher at Modern Token.