For any cryptocurrency holder, keeping up to speed with the constant fluctuations in coin prices and trading pairs, and tracking the latest crypto exchange developments is essential. Even more so if you run your own crypto-based business, in which case you’ll also need to keep track of your own coin’s growth and customer activity as well.

Online services that cater to this need range from market-based crypto price trackers and exchange volume rankings, to in-depth, algorithm-based analysis. The following is a COIN360 review of three popular analytical firms that claim to provide the very best cryptocurrency and exchange rating systems out there. We discuss their rating scales, methodology, and (when applicable) their controversies.

This is the first installment of a 2-part series, read Part 2, featuring China’s Center for Information and Industry Development, TokenInsight and Rency here.

Flipside Crypto offers several products, including a portfolio tracker and a monitor for companies and projects to understand how users interact with their blockchain. But the company is best known for its original comparative metric for cryptocurrency project health: the Fundamental Crypto Asset Score, or FCAS. Flipside’s Rating System The FCAS is a single score, computed from multiple variables and meant to reflect changes within a project, rather than a project’s changes relative to the industry at large.

Every project is assigned a score between 1 and 1000. At the time of writing, Bitcoin ranks 4th, with a FCAS of 884, which makes it a grade A coin. In contrast, three coins are currently graded as Superb: Ethereum is in the lead with 942 points, followed by Dai with 915 and EOS with 914. 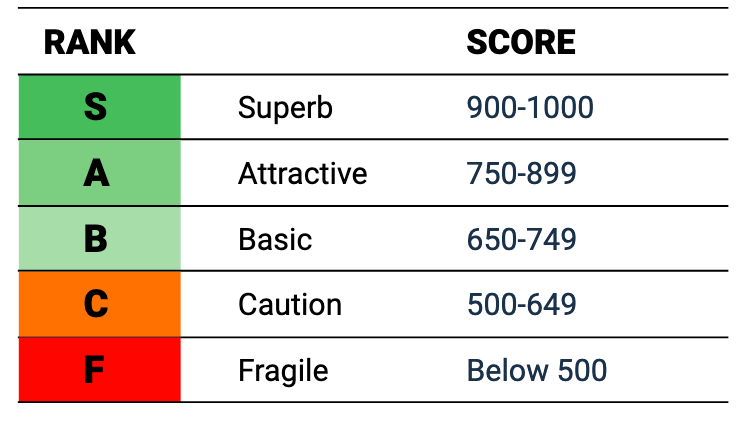 For each currency measured (around 450), Flipside analyzes the interactions of multiple variables across three fundamental criteria:

User activity. By parsing smart contracts, and labeling wallet addresses and their corresponding transactions, Flipside’s algorithm ingests data regarding project utilization (i.e. activity of user-operated wallets engaging in the intended use-case of the project) and network activity (i.e. wallet address classifications, focusing on staker, miner, user, and investor wallets).
Developer behavior is an indicator of activity and efficiency in a project’s development team. It tracks 30 variables related to code changes, code improvement, and community involvement. The data is obtained from events in developer code repositories like GitHub and GitLab.
Market maturity is the likelihood that an asset will provide consistent returns across various market scenarios. It has less than a 5% impact on a project’s FCAS. It focuses on variables relevant to liquidity and market risk (including exchange liquidity, price projections, price cliff potential, algorithmic prediction consistency, and price volatility).

The three fundamentals that a project’s FCAS score are based on: user activity, developer behavior and market maturity.

Flipside has had a positive reception overall. It is currently working directly with over 35 crypto projects. Publishers such as MarketWatch, TheStreet and Stocktwits also rely on FCAS, and Hacked and Bloomberg often use Flipside’s data as a primary source in cryptocurrency analysis articles (example). This roster has given Flipside a big credibility boost in the public’s eye.

That being said, a few negative opinions have come from users who are skeptical of the firm’s high ranking for TRON and EOS. In April 2019, TRON ranked 4th at 879 points, and EOS ranked 1st, with 909 points. 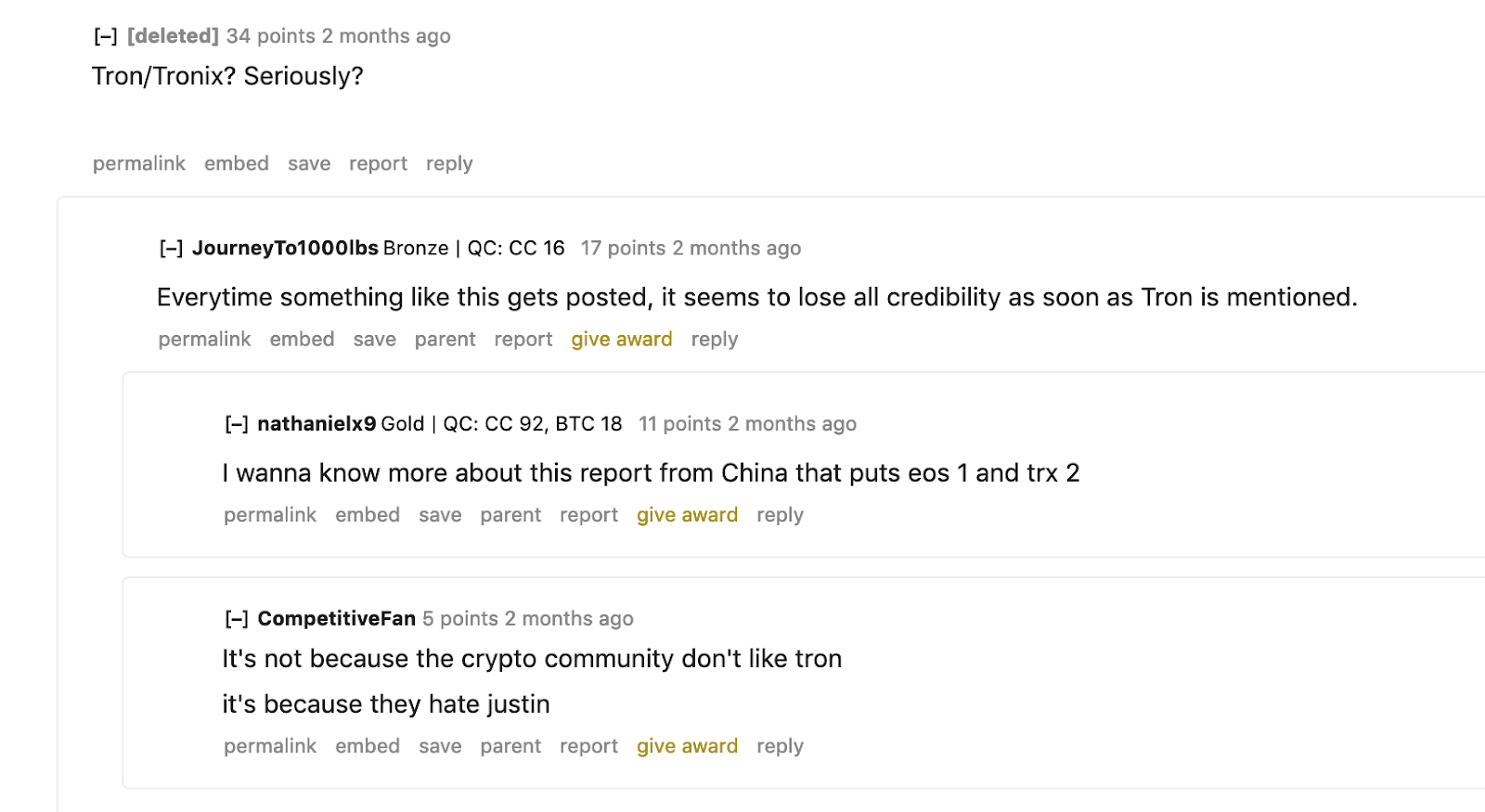 Users on Reddit express their disbelief that TRON would receive such a high FCAS.

Flipside’s response to any suggestions of manipulation is that their ratings are 100% qualitative and cannot be manually altered. The company intakes raw blockchain data across relevant projects and parses them internally, to later clean, analyze, and recreate the raw data elements, and combine them with market data gathered from various sources to inform their models.

On Mar. 29, Flipside released the FCAS25 score: a time-weighted moving average of the FCAS scores of this ranking’s top 25 projects (must have been ranked top 25 for at least 40 days).

For CEO Dave Balter, the biggest takeaway from the FCAS25 results is that, even though market maturity does roughly correlate to prices, a cryptocurrency’s price is not a good indicator of its project’s success. According to Flipside’s analysis, even in the bear market of 2018, user activity has been on the rise. “The data proves the cryptocurrency industry is far from over,” said Balter in a press conference, “as a matter of fact, it’s humming.”

This firm considers fake volumes on cryptocurrency exchanges a major threat to the industry, and since their launch in Jul. 2018, their self appointed mission has been to conduct research into the topic. Their stance in view of their results thus far is that the trade volume metric used by crypto exchanges as the main ranking factor can mislead traders rather than inform them, and allows exchanges to manipulate data and provide an advantage to unfair players. CER was originally available for free up until 3 months after its launch. In Oct. 2018, it put some features behind a paywall.

Crypto Exchange Ranks is powered by Hacken, a company that offers smart solutions for IT companies.

Exchanges are assigned letter grades in the General Rating based on the results of four main scoring dashboards explained in Methodology.

It is worth mentioning that, in addition to their rating system, CER also offers insights into their research in the form of articles periodically posted to their blog. 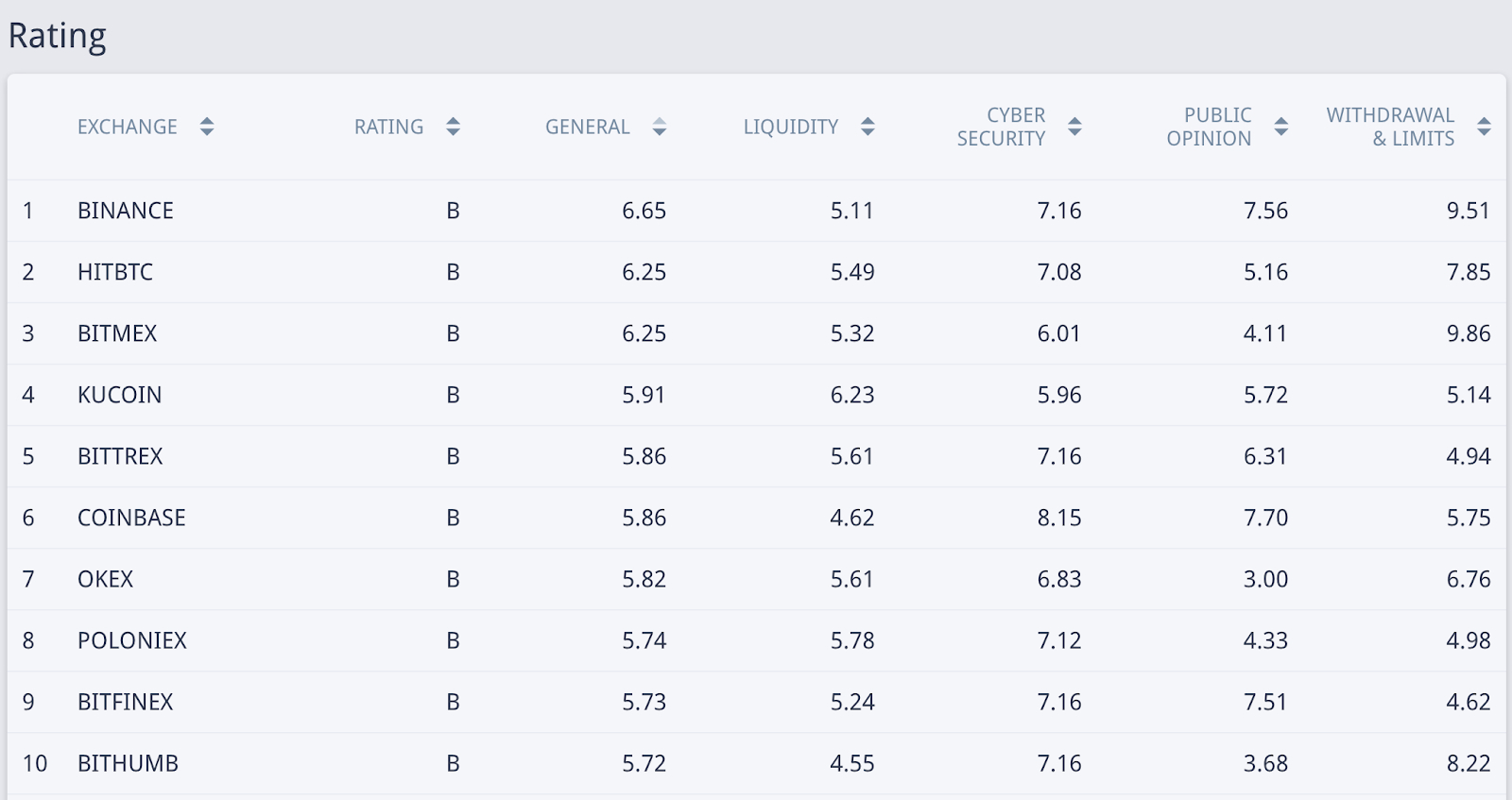 The current top ten cryptocurrency exchanges according to CER’s ranking.

CER may sound familiar to you because in Dec. 2018 it accused the cryptocurrency exchange Bithumb of wash trading in order to artificially boost its trading volume. Bithumb ranked at the bottom of the top ten global exchanges in September at $350M in daily trade volume, but had risen to $4.4B by Nov. 11.

"Having calculated Price-Volume Correlation we came to the conclusion that the trade volume performance is not linked to price fluctuation on the exchange," CER marketing lead Gleb Myrko told Forbes.

This accusation caused sensational headlines last December. However, the media also noted that Hacken Ecosystem, the company CER belongs to, offers a "white hat" community token. Faced with the logical accusation that there may be a conflict of interest between Hacken—a token issuer—and Bithumb—then the world’s second-largest exchange, Forbes asked Hacken if they had ever tried to list on Bithumb. "No, never," was the only reply.

CER has launched several initiatives in an effort to “make their work more transparent,” including their CERtification Services, Transparency Hackers Initiative, Exchange Analysis Service, and a collaboration with Etherscan and BitFury’s Crystal Analytics that made the Blockchain Balance Ranking possible.

Their CERtificate Services have so far launched a Proof of Funds CERtificate and a Cybersecurity CERtificate in Q2 2019. The release of 3 new certificates is scheduled for Q3, and more ambitious plans for the near future include “cooperation with banking associations” and “cooperation with governments and regulations” for 2020. 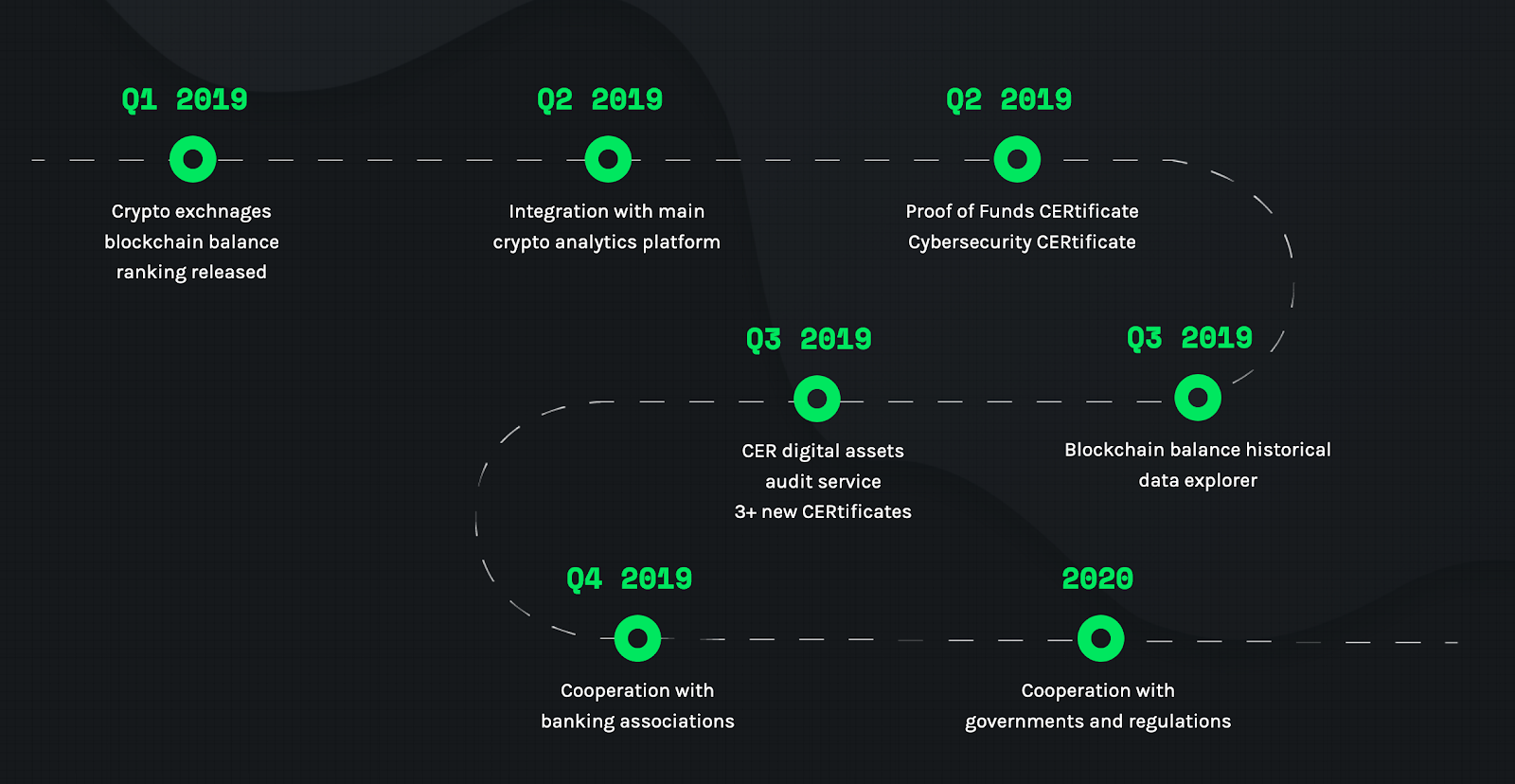 Weiss Ratings is a subsidiary of Weiss Research Inc.—a company founded in 1971 that specializes in banking and insurer ratings. Weiss Research boasts a solid enough reputation for its banking and insurance ratings. Esquire magazine even credited founder Martin Weiss for having predicted the 2008 collapse of the real estate bubble back in June of 2005.

Weiss Ratings claims to use the same methodology and standards as Weiss Research, for its banking research as much as for its crypto research. Weiss Research has allegedly never received compensation from sponsors nor accepted advertising from issuers, relying solely on rating and research sales to end users. Weiss Research’s success has been recognized by the Wall Street Journal, The New York Times, and even the U.S. Government Accountability Office (GAO) in the past. We’ll come back to how Weiss Research’s reputation is at times abused by their Crypto Ratings branch in the Controversy subsection. 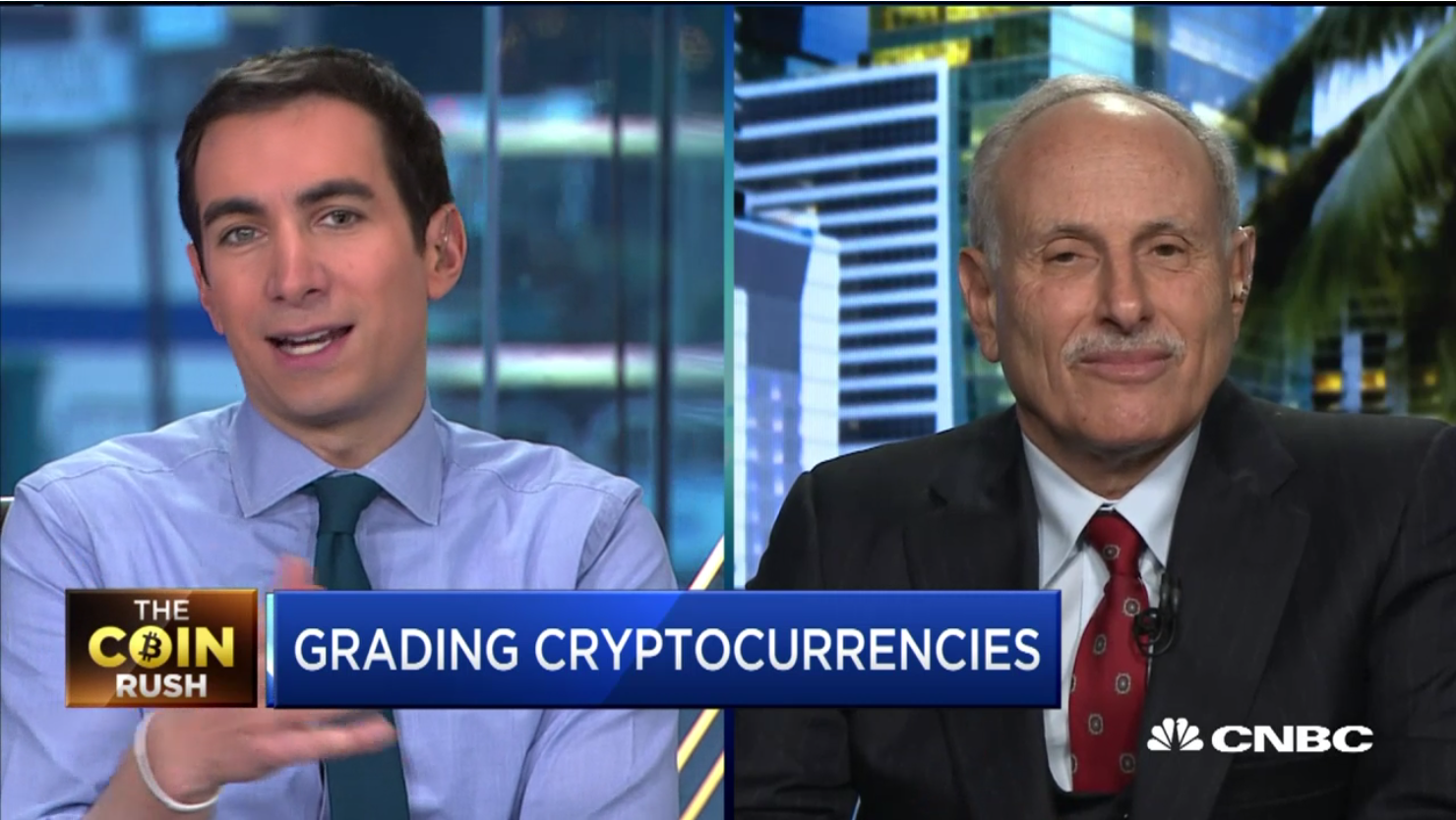 A = excellent
B = good
C = fair
D = weak
E = very weak
F = only assigned to cryptocurrencies that have failed or are subject to credible allegations of fraud.
A plus or minus can be added to each letter grade, indicating the upper third or lower third of a grade range, respectively.

Like Flipside, Weiss’s ratings are exclusively qualitative, based on algorithm-driven computer models. Weiss uses four submodels to break down cryptocurrencies, explained in an interview with CNBC (video here):

Risk Index: related to price volatility. It gives investors an indication of how much downside potential a cryptocurrency has. The submodel measures relative and absolute price fluctuations over multiple time frames, declines from peak to trough in terms of frequency and magnitude, and market bias, and other factors.

Technology Index: related to a coin’s technological sophistication. The submodel evaluates a coin’s underlying source code and its capabilities for scaling solutions, decentralization, energy efficiency, sophistication of monetary policy, governance capabilities, flexibility to upgrade, and others.

Fundamental Index: related to a crypto project’s basic usability features such as speed, adoption, security, public acceptance, etc.. The submodel evaluates real-world network security, network capacity, speed, scalability, market penetration, decentralization, developer participation, public acceptance, and other factors. In the aforementioned CNBC interview, Martin Weiss commented this index is important because “unless [a crypto project] is reality-tested in the marketplace, it may not succeed.”

The model consists of five basic layers:
Layer 1: data on each currency’s technology, adoption, risk and reward.
Layer 2: proprietary formulas that convert the data into comparable ratios.
Layer 3: proprietary sub-models that aggregate the ratios to measure factors and features considered critical to the potential success or failure of investments in each cryptocurrency.
Layer 4: is divided into two grades: (1) the Tech/Adoption Grade which evaluates the long-term potential of each cryptocurrency and (2) a shorter-term Risk/Reward Grade based on market price patterns.
Layer 5: an algorithm that combines the Tech/Adoption Grade and Risk/Reward Grade.

The online community’s first reaction to Weiss’s interest in crypto was skeptical: what could a company that dealt in traditional finance since the early 70’s know about crypto (CNBC)?

This general opinion was confirmed by Weiss’s initial C+ rating for Bitcoin (and intensified by the fact that NEO was rated A). Ari Paul, CIO of Block Tower Capital, wrote: “their rating of Bitcoin suggests a misunderstanding of the core value proposition of cryptocurrency, as they seem to overvalue transaction capacity, and undervalue protocol stability, security, and decentralization.” Bitcoin.com complained that Weiss’s ratings for BTC and NEO were preposterous. “[It] confirms that Weiss—a company with no background in cryptocurrency—doesn’t understand the industry it’s judging.”

Commentators also highlighted the fact that Cardano—a project with no working product at the time—also scored higher than Bitcoin.

When rebutting criticism, Weiss Crypto Ratings has referred to a document issued by the U.S. Government Accountability Office (GAO), supposedly praising their work (here). However, in the comments compiled by the COIN360 Editorial team, Weiss seldom mentions that this document was issued in 1994 and reported exclusively on data compiled between 1989 and 1992 regarding Weiss Research’s life and health insurer ratings. Objectively speaking, the GAO’s praise holds no relevance whatsoever to Weiss’s work with crypto ratings. 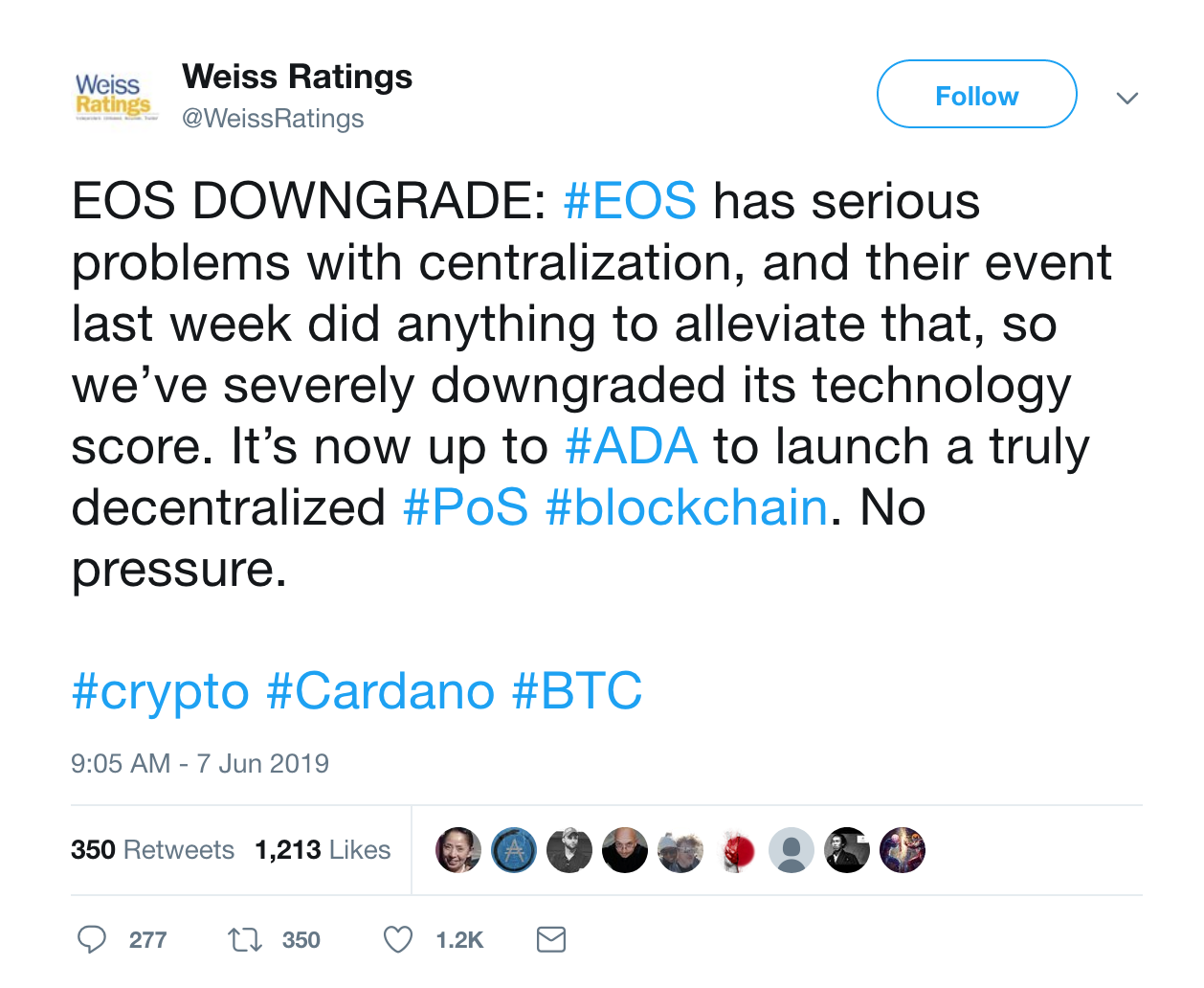 Weiss Ratings tweets the highlight of their latest crypto ratings report in Jun. 2019.

In its latest report, issued in Jun. 2019, Weiss Ratings claimed EOS was downgraded due to its “severe centralization issues,” and added that “their event last week did anything to alleviate that,” referring to Block.one’s announcement of Voice, a blockchain-based social media platform, on Jun. 1.

The ability to collect massive amounts of data on a given set of entities and then crunch the numbers into a hierarchical system rating those entities is enticing in the modern business world, and the crypto sector is no exception. Numbers and ratings presented in a clean, unambiguous format can provide a sense of security and predictive power in an industry characterized by the complete opposite. But this is precisely why, as readers, we should strive to truly understand the methods and past history of any source that claims to have these abilities. Mistakes made based on ill-informed predictions can be catastrophic, both in traditional finance, and in crypto.

Thank you for reading.
The COIN360 Editorial Team