Bitcoin (BTC) started off a new week on Monday with surprisingly strong gains to break above $20,000 on Sept. 27. While the largest cryptocurrency by market cap tagged its highest level in more than a week, it was still unable to escape its narrow trading range.

The rickety recovery ended abruptly today when Bitcoin lost ground during the U.S. trading hours and crashed below $19,000 before retracing back above the threshold.

Bitcoin’s strong performance did, however, help Ether (ETH) recover some of its losses following the dramatic post-Merge sell-off and lifted the broader crypto market higher until today’s sell-off wiped out the weekly gains.

As the crypto market slipped, the total crypto market cap remained below the $1 trillion mark. Meanwhile, the Crypto Fear and Greed index, now at 20 points, is likely to finish the month in the ‘extreme fear’ zone.

The game of hikes: new season

In one of the most turbulent macro settings in decades, financial markets are spinning down. The Fed raising interest rates by another 75 basis points last week triggered a sell-off in the traditional asset markets, even though the Fed’s decision didn’t come as a surprise and was believed to be priced in.

As we covered in the previous issue of Coin360 Weekly, the Fed’s commentary on its future moves is the actual signal for traders rather than the rate hike itself. As the Fed pledged to bring inflation down to 2%, Fed’s Chair Powell indicated it will keep hiking rates until it hits a “terminal rate,” or end point, of 4.6% in 2023.

Projections from the meeting also indicated that Fed would remain more hawkish for the rest of 2022, likely raising rates in each of its final two sessions this year by at least 1.25 percentage points in total. That also implies a quarter-point rate hike next year but no decreases, and rate cuts are expected until 2024.

The FOMC decision was pivotal in determining the next leg for markets, as evidenced by the price performance in risk-on assets over the last week. Today's sell-off may not be as harsh as it could be, while S&P 500 notched a new 2022 year low today, breaking below the previous bear market intraday low that was set in mid-June.

Given the worsening geopolitical situation amid the Russia-Ukraine conflict and energy crisis in Europe, the risk-on assets are unlikely to build momentum in the coming weeks, at least till the next CPI on October 13. 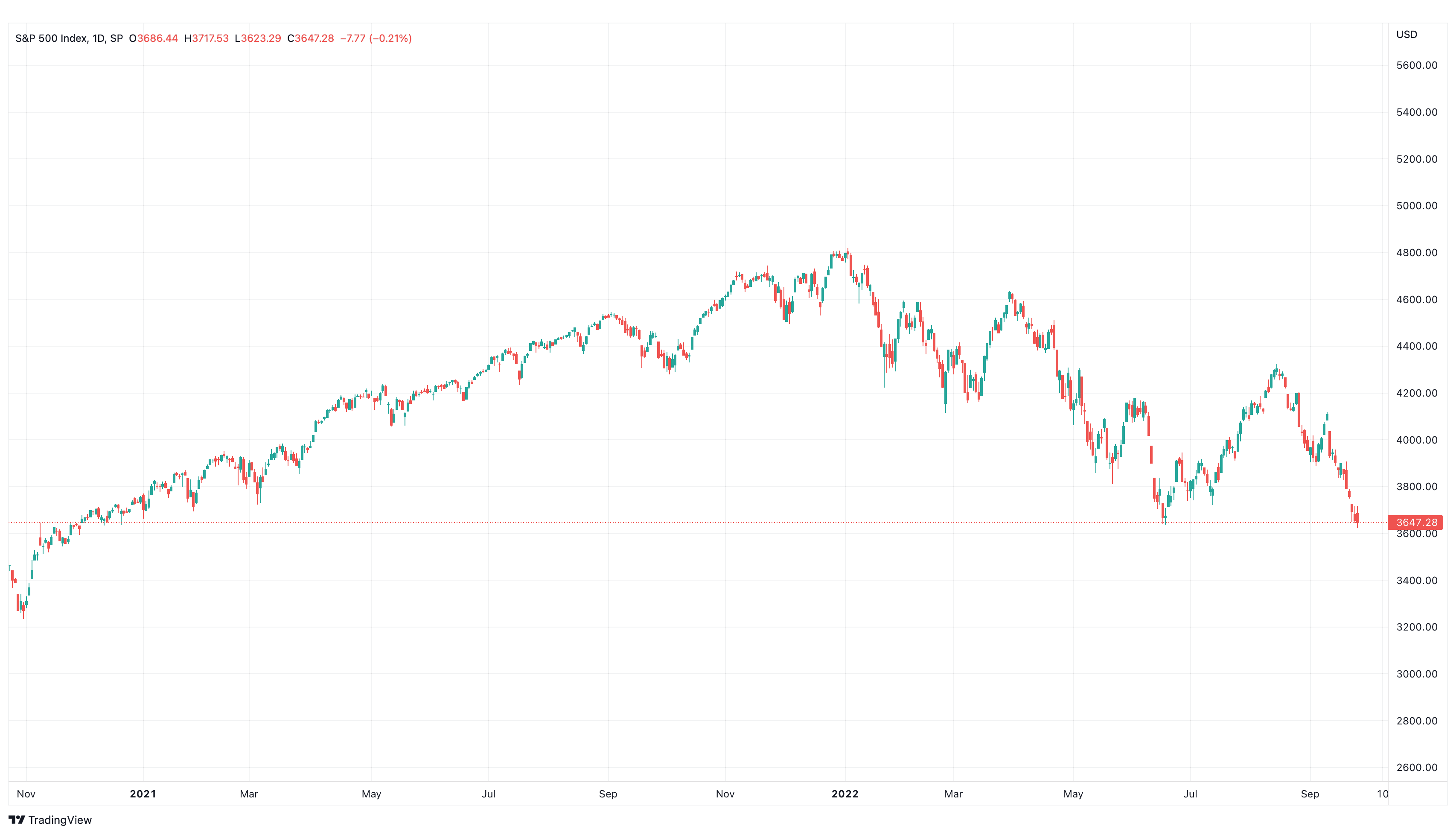 A ripple turns into a wave

XRP (+16%): Ripple’s native coin substantially underperformed other top cryptocurrencies by market capitalization, with XRP remaining one of the rare large-cap cryptos closing the week in the green. Even though the momentum faded in the last two days, XRP delivered its holders an upside of 15.7% in the last 7 days as the market is pricing in a potential Ripple win in the SEC lawsuit that is coming to an end after almost two years.

RSR (53%): Reserve rights, an ERC-20 native token of the Reserve protocol, saw its value increase by 52.6% over the past week in anticipation of the protocol’s mainnet launch on the Ethereum network. RSR is trading at $0.008286 at the time of release, according to Coin360 data.

Reserve protocol has been described as a pool of stablecoins that are designed to reduce risk through diversification and decentralized governance. Unlike fiat-backed stablecoins like USDT, the Reserve network’s stablecoin, reserve (RSV), relies on RSR to “perform an arbitrage loop” that helps maintain the price of RSV to around $1.

Notably, it was revealed earlier this month that the U.S. Congress is working on legislation that would temporarily ban certain types of algorithmic stablecoins. The legislation would make it illegal to issue or create new “endogenously collateralized stablecoins” during a two-year period as regulators study the instruments.

COMP (19%), MKR (18%), UNI (+16%): Ethereum blue chips are among the best performing cryptos this week as they all recover from the post-Merge stress that brought the major tokens of the Ethereum ecosystem to oversold territory earlier this month. However, activity in the protocols as well as the total value remains muted as the crypto winter gives its chills.

Building in the bear market

ATOM (-14%): The native token of the Cosmos ecosystem, ATOM, closes this week with a 13.6% loss despite a spree of developments revealed during the ongoing ecosystem conference, Cosmosverse. At the event, the Cosmos team introduced a new whitepaper that proposed changes to the Cosmos Hub aimed at strengthening interoperability and security, as well as a revamp of the tokenomics of ATOM.

ADA (-2.5%): Sept. 22 saw the debut of Cardano's "Vasil" hardfork, one of the biggest upgrades to the protocol to date. The upgrade is expected to make the network faster, cheaper, more developer friendly, and "more sophisticated" from the get-go with more intricate smart contracts.

The upgrade appears to be worth the wait even with delays as users are already citing a decrease in transaction fees. The effects on the developer side are yet to be seen though.

In terms of price action, the hard fork didn’t help ADA to build strong momentum like it helped Ether ahead of the Merge. The price of ADA started to fall on Sept. 11, and ADA only took a breather on the day of the hardfork to climb from the local bottom at $0.435 to a local peak of $0.4611 on the same day.

DOT (-0.4%): Polkadot’s DOT is also in the red this week, even though the token saw a price surge on Sept. 26 after the layer-1 blockchain unveiled its progress to improve the network’s parachain scalability, relay-chain governance, cross-chain communication, and parachain development.

ETHW / IOU: Proof-of-work tokens to plummet following the Merge, with Ethereum hard fork ETHW down more than 60% in two weeks despite the latest trend reversal, while Ravencoin’s RVN and Ergo’ ERGO also underwater following consecutive weeks of gains ahead of the merge.

VGX: Following the Terra unwind in May, cryptocurrency exchange Voyager halted client withdrawals, deposits and loyalty rewards earlier this year. The company filed for bankruptcy protection later in July this year, becoming one of the first crypto companies to do so following crypto’s market rout.

In September, Voyager revealed its plans to auction the company’s assets as several firms in the crypto industry expressed interest. Voyager’s assets were auctioned among qualified bidders on Sept. 13.

FTX, a popular crypto exchange founded by billionaire Sam Bankman-Fried, came off as the winner of the auction, according to today’s report from Bloomberg. The agreement is valued at about $1.4 billion, comprising an “additional consideration” worth about $111 million and the $1.3 billion market value of all the cryptocurrency at the bankrupt platform. The purchase agreement will be presented for approval in court on Oct. 19.

The purchase follows a failed attempt by Alameda Research - a trading house affiliated with FTX - to bail out Voyager with a collateralized loan intended to help close the gap on the balance sheet and avoid a bank run. A judge ruled earlier this week that Alameda must pay back a $200 million collateralized loan to Voyager that was made before the bankruptcy. The collateral owing to Alameda may be returned by Voyager "as soon as is reasonably possible," the court has ruled.

As for Voyager’s VGX, we mentioned earlier that the auction itself, or the results announcement were expected to become a "sell the news" event for the token, and this is exactly what happened as the token pulled back to $0.67 just two days after breaking above the $0.75 level.

Celsius: Token of a beleaguered crypto lending platform Celsius rose 2.7% after CEO Alex Machinsky resigned as a boss of Celsius in the middle of bankruptcy proceedings. The price of CEL plunged nearly 9% in the first hours after the news broke, wiping out nearly $50 million in the token’s market capitalization, but the token quickly retraced.

Despite the decision to leave Celsius, Machinsky promised to continue to help the company to provide creditors with the best outcome. Like Voyager, Celsius filed for bankruptcy in July this year after the crypto market crash.

NEXO: Another crypto lender, NEXO, is not an officially troubled company so far, but the status quo may change since the company is now sued by eight US state securities regulators, including New York and California. On the positive side that helped NEXO offset a large part of the losses is the news of the stake purchase in a federally chartered US bank Summit National.

In the middle of nowhere 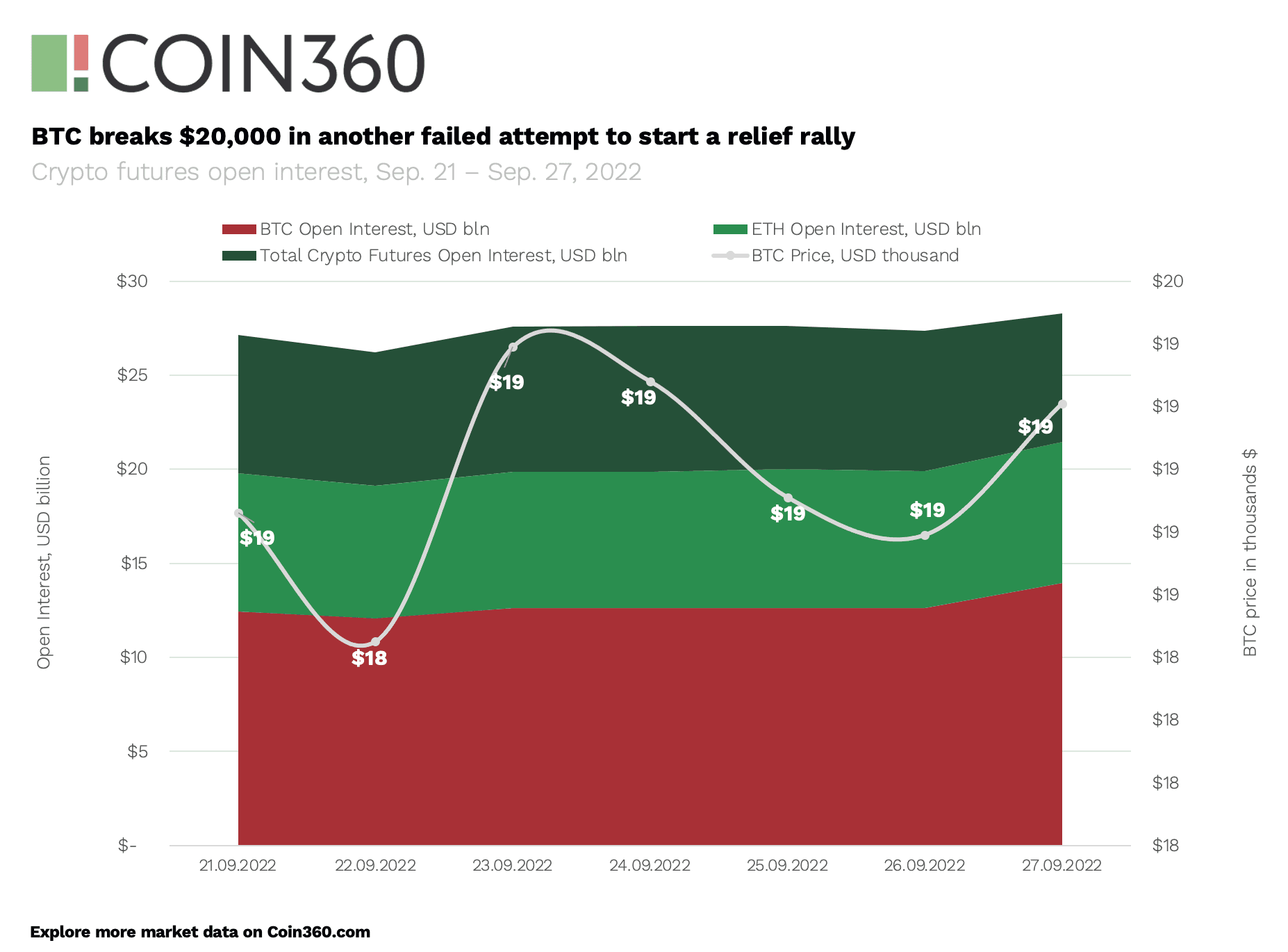 Markets rebounded aggressively from that level, and BTC broke $20,000 today in another attempt to break through $20,500. The rebound was accompanied by huge spot buying power; however, a large number of limit sell orders on $20,300 was hit, and BTC was rejected from that level, crashing towards $19,000.

Crypto futures open interest (OI) remained constant the past week as BTC and ETH were trading in a range, and there was no clear market direction. Yesterday Total Market Open Interest climbed close to $30 billion without large liquidations on the short side, which might suggest that bulls are exhausted to make another huge move.