Though the trajectory for Initial Exchange Offering (IEO) can’t compare to the ICO boom of 2017-2018, more and more projects have started offering their tokens on exchanges. Binance Launchpad, Huobi Prime, KuCoin Spotlight, Bittrex International, and BitMax Launchpad are among the most popular IEO platforms, leading a host of less popular exchanges following this latest trend. According to ICObench, over 60 projects have completed their Initial Exchange Offerings as we approach the midpoint of 2019. Of course, not all of these offerings have been successful in raising sufficient funds. In this article, we will introduce the 5 IEOs which have successfully raised the most money. We will revisit each project, identifying unique offerings and project specialization. We will then detail each IEO, and discuss community reaction.

BitTorrent is a popular file-sharing project with 100 million monthly active users from 138 countries. In July 2018, BitTorrent was acquired by TRON. The BTT token is a TRC-10 token running on the TRON blockchain. Its goal is to incentivize activities that lead to better file sharing, like using faster networks and enabling longer seeding periods. 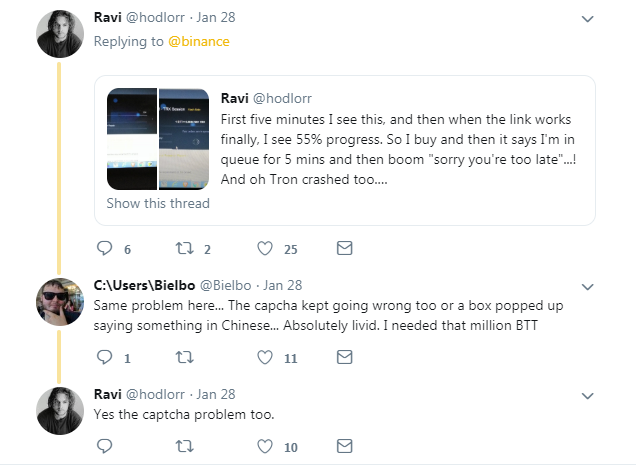 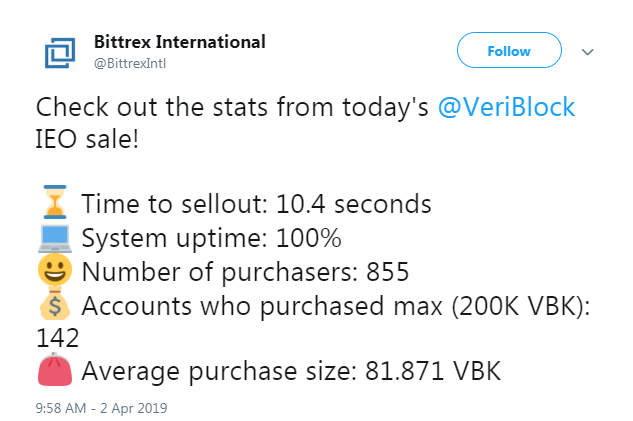 The VeriBlock blockchain enables rapid, widespread, and secure adoption of PoP (Proof of Proof) security for other blockchains. Its key advantages are the prevention of double spend attacks, protection against 51% attacks, and early attack detection. VeriBlock’s technology allows any blockchain to inherit Bitcoin’s Proof-of-Work security in a decentralized, trustless, transparent, and permissionless manner.

The first Bittrex IEO started on Apr. 2, 2019, and ended in 10 seconds. Users could purchase the VBK token for Bitcoins, the price was set 24 hours before the IEO start. The minimum purchase amount was 100 VBK, the maximum 200,000 VBK, the total amount for the Initial Exchange Offering was 70M VBK (3.3% of the total supply). As Bittrex claimed on Twitter, 855 investors managed to participate in the sale, of which 142 users bought the maximum possible amount — 200,000 VBK tokens.

The sale finished in just 10 seconds, some unlucky users got furious: 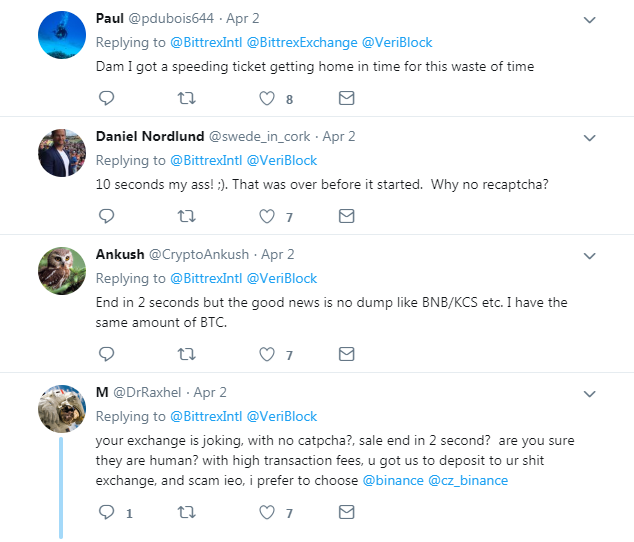 Most accused Bittrex of not using Captcha, which allegedly didn’t prevent bots from taking part in the sale. Some users also claimed that the tokens were sold out before the public sale and that the IEO was just a formality.

Ocean Protocol is an ecosystem for AI data managing and associated services. Data providers can share their data and earn revenues, while data consumers can discover and purchase necessary info. The project aims to provide traceability, transparency, and privacy of data transfers. Ocean Tokens are ERC-20 tokens on Ethereum, and they are designated to be moved to the Ocean Mainnet later. The tokens will be used for buying and selling data and services, incentivizing data sharing, staking, and dispensing network rewards.

The Ocean Protocol’s token sale started on Apr. 30, 2019, and finished on May 3. 56.4M OCEAN (4% of the total supply) were allocated for the IEO, $0.12 per 1 OCEAN. Users could pay for the tokens with BTC, and the individual cap was $5,000. As the Ocean Protocol team claimed on Twitter on May 3, the IEO finally raised over $6M. All unsold tokens were returned to the Ocean Protocol Foundation. Bittrex began trading OCEAN in pair with USDT on that same date. 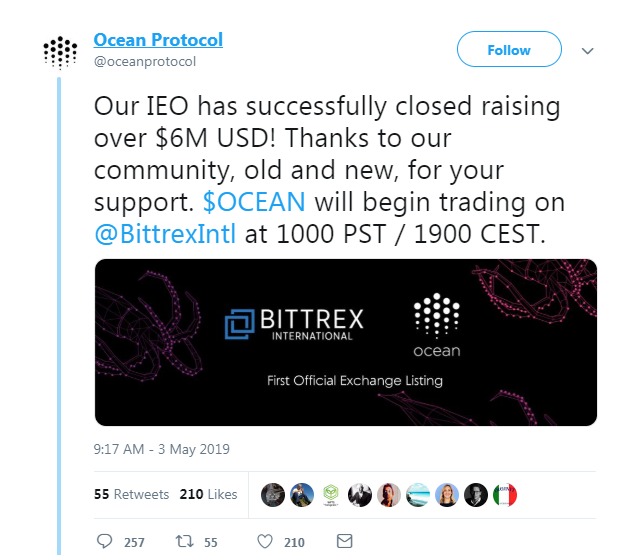 The scandal sparked soon after the IEO completion. The Ocean Tokens, which were sold for $0.12 each during the IEO, suddenly dropped in price and immediately lost around 75%, trading at $0.03 on Bittrex on May 3. The investors were shocked and disappointed, while the lack of official information and explanations only fueled their indignation. The community rose up against Ocean Protocol and Bittrex, some suspected a scam: 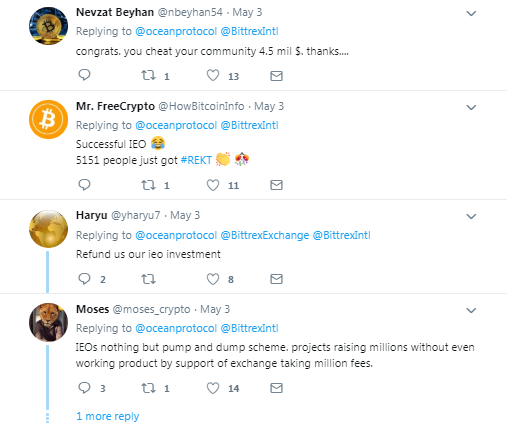 On May 9 (almost a week after OCEAN was listed on Bittrex), Ocean Protocol broke the silence and shared an article titled “What Happened with the IEO”. To paraphrase the article they took time to thoroughly analyze the situation and wanted to share insights about what happened. According to the Ocean Protocol team, the Bilaxy exchange started trading OCEAN without communicating with them, 2 hours before the trading started on Bittrex. It lowered the price to $0.06. When the trading began on Bittrex, the price “plummeted from panic selling”, i.e. there were much more people who wanted to sell than buy. In the end, the developers promised that they would keep working on the project to “build sustainable value”.

Some community members were satisfied with the explanation provided and claimed that they still have trust in the project. Others were unhappy and sarcastic, saying that Ocean Protocol is trying to evade responsibility, blaming “panic sellers” and not admitting their own mistakes.

Regardless of who is to blame, the Ocean Tokens current price ($0.027), which is 78% lower than the IEO price of $0.12, makes us think of it as an unsuccessful investment.

Fetch.AI is a decentralized digital world for the future economy, where autonomous agents transact and construct solutions to complex problems of the day. Autonomous agents can act without human involvement, and they can pay and be paid with FET tokens. Agents represent a value of some sort (e.g., data), and search for opportunities to utilize this value and make a profit (e.g., sell the data). In short, Fetch aims to make data self-delivering and self-exploiting.

Remember the first Initial Exchange Offering on Binance Launchpad, which ended in minutes and resulted in hundreds of disgruntled customers? Well, it was practically the same for their second sale which ended in seconds. Most investors didn’t have enough time to buy the tokens due to Captcha that didn’t work properly again, resulting in a queue of requests. Others though, bragged about being lightning fast. 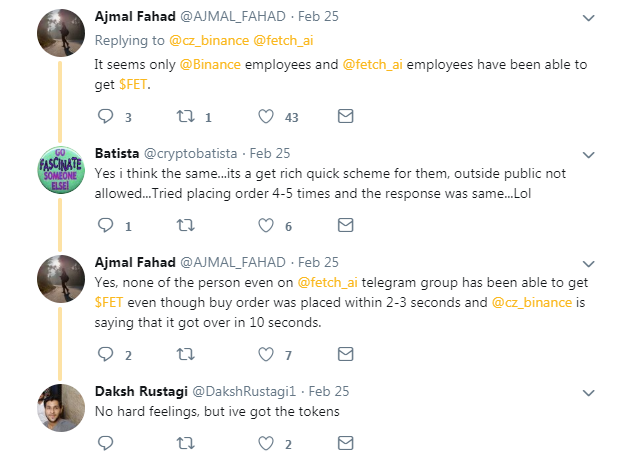 Matic aims to bring scalability to the Ethereum blockchain, solving the problems of slow block confirmations and high gas fees. The Matic Network will allow users, merchants, and Dapps to make and accept payments in crypto assets. A single Matic chain can handle up to 65k transactions per second, and building a sidechain tree architecture will allow this number to increase to millions. Matic Token is designed to be a universal payment asset within the network.

The sale started on Apr. 25, 2019. This time Binance decided to conduct the IEO in the form of a lottery (perhaps due to the community frustration of previous sales). 1.9B MATIC (19% of the total token supply) were allocated for the Initial Exchange Offering. The price of 1 MATIC was $0.00263. According to the rules, users could claim up to 5 lottery tickets, depending on their BNB holdings for the previous 20 days. The more BNB they had, the more tickets they could get. If a user got the winning ticket, $300 in BNB tokens were deducted from their account, and in turn, they received 114,004.56 MATIC. The number of winning tickets was 16,666, 58.38% of the total.

Unlike the previous sales on Binance Launchpad, the Matic lottery IEO was well received by the community receiving high praise and favorable reviews. Some users even called it “the best distribution model on the cryptocurrency market at the moment”. 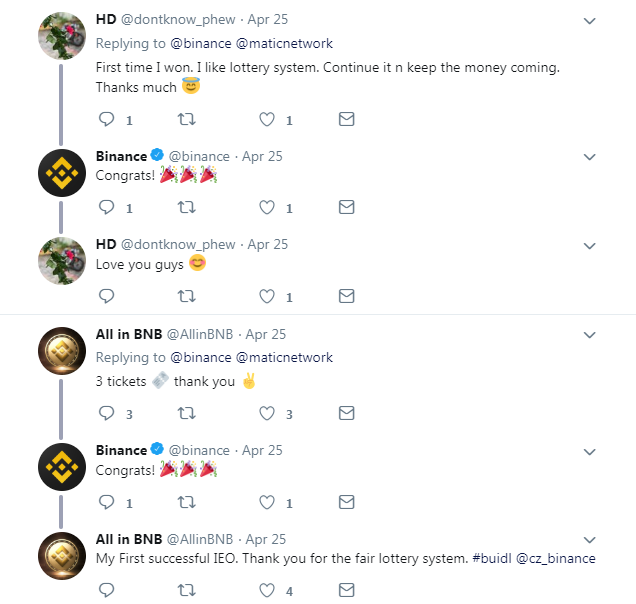 There also were some unhappy users, who claimed the poor would never have the chance to take part. They suggested the minimum amount of BNB required to be on hold in order to participate was rather high — 50 BNB, or over $1,100 at the exchange rate at that moment.

IEOs are considered to be more trusted than ICOs. The point is that exchanges value their reputation and incoming projects are subject to close scrutiny. Moreover, smart contracts are managed by exchanges, and exchanges ensure that all participants will receive their funds. Most exchanges also conduct mandatory KYC or AML procedures. However, no exchange could guarantee that your investment would be profitable. As this article highlights, some tokens have lost their value, and their current prices are lower than those during the Initial Exchange Offerings.