Is the end nigh for crypto? FTX collapse causes market crash 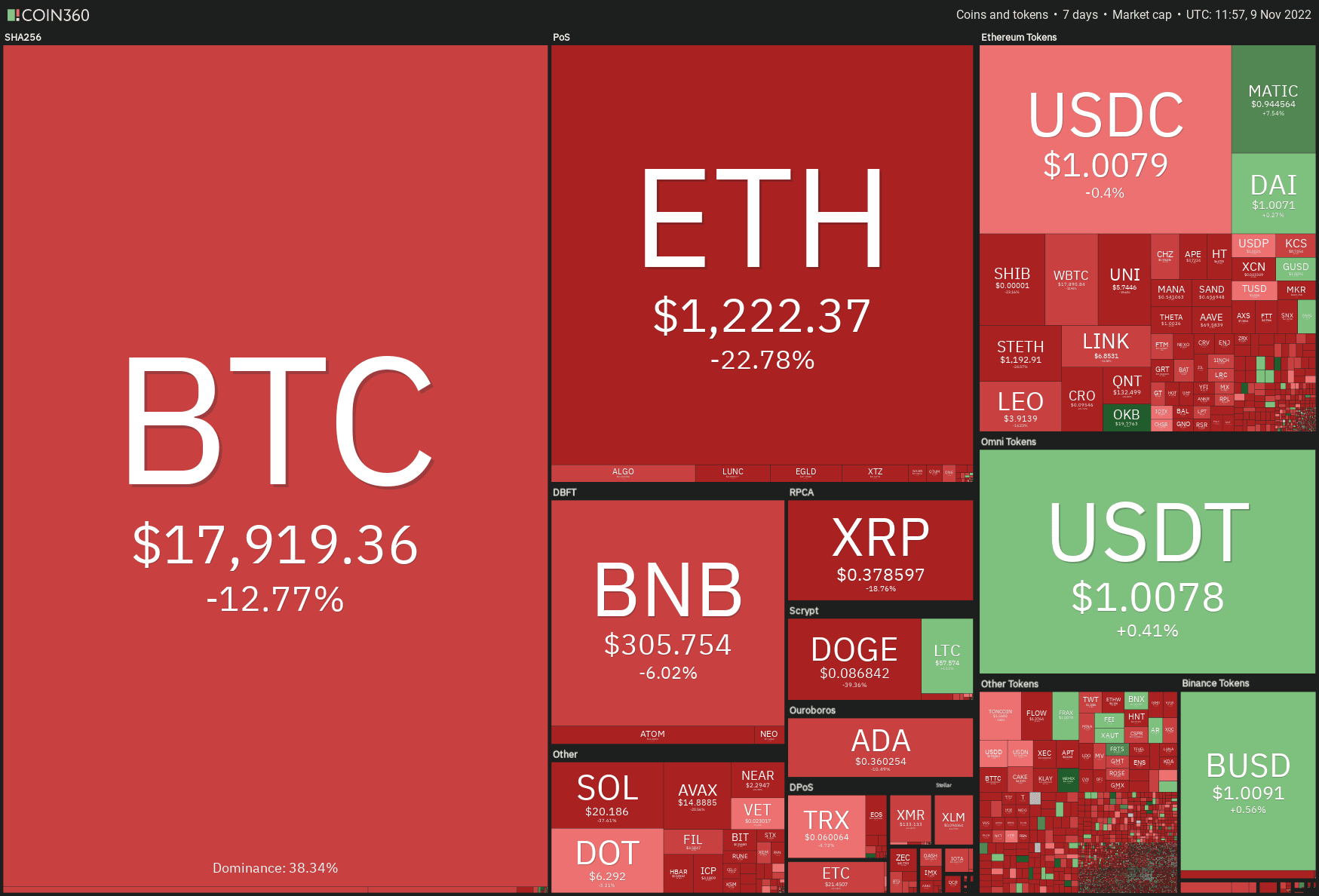 This past week was expected to bring volatility to the financial markets as the Fed’s decision on interest rates, the midterm elections in the U.S. and the earnings reports from the Big Tech and crypto companies were enough to move markets.

Yet, the main story of the week is not macro. All eyes are on one of the largest crypto exchanges, FTX, which faced a massive liquidity crunch amid insolvency rumors and the subsequent exodus of customers. We break down another spectacular crash of 2022 in the following part of this week’s Coin360 newsletter.

The worst-case scenario seen in the FTX collapse caused a rout in the broader crypto market, with all the assets across the board in bloody red. At one point of the day Bitcoin (BTC) saw a 15% weekly loss, sliding below $17,600 for the first time since late 2020, but retraced back to the more familiar price level.

Ethereum (ETH) and other major altcoins saw even bigger losses, with one exception - Binance Coin (BNB), and there is a solid reason for BNB to stand stronger than the rest of the crypto market, which we discuss in this issue.

Adding up to the ongoing contagion are the midterm election results in the U.S. expected this week, while CPI release on Thursday is also likely to shake the stock and crypto markets.

Can crypto survive another big contagion? We’ll have to find out.

Echoes of the Terra / 3AC crash

For those who learned hard lessons from Terra's ‘death spiral’, echoes of the crash that scarred the crypto industry 5 months ago are reverberating today. The collapse of Terra's stablecoin UST (USTC) and native token LUNA (now LUNC) in May destroyed billions of dollars in investor wealth and led to the bankruptcy of the crypto powerhouse Three Arrows Capital.

The fear that the ongoing FTX-Alameda drama may lead to a Terra-like crypto collapse gripped the market on Nov. 2 following the release of a CoinDesk article related to the balance sheet of Alameda Research, the crypto trading firm also owned by billionaire Sam Bankman-Fried.

According to a CoinDesk report, a sizable portion of Alameda's balance sheet was made up of FTT, the native token of FTX exchange, and Solana's SOL token. Alameda listed $3.66 billion in "unlocked FTT," as well as $2.16 billion worth of "FTT collateral."

The FTT token on Alameda’s balance sheet was roughly 1/3 of their total assets and equal to 88% of Alameda’s net equity. This means that the firm’s largest asset is a crypto token issued by SBF’s other company, with a very significant portion of its assets in tokens issued by other related parties.

Since the CoinDesk report, the liquidity crunch on FTX has become a source of concern for the market. The fall of FTX parallels the crash of Terra (LUNC). Like Terra, FTX faced a bank run as users attempted to pull their funds amid rumors of insolvency and its FTT coin lost more than 50% of its value.

FTX saw around $6 billion of net withdrawals in 72 hours before Tuesday morning, according to a leaked Telegram message from Sam Bankman-Fried to the crypto exchange staff. According to Nansen data, FTX also saw a significant exodus of stablecoins from its exchange.

FTX “temporarily” froze customer withdrawals on Ethereum, Solana and Tron today as concerns that the exchange didn’t have enough liquidity mounted, as evidenced by on-chain data. FTX later restarted processing clients' requests for withdrawals, but not for long. At the time of writing, the withdrawals at FTX are ‘effectively paused’ again according to a leaked Telegram message from Sam Bankman-Fried to the crypto exchange staff.

Knives out: Binance vs FTX

Binance, the largest crypto exchange by volume, entered a non-binding agreement with FTX, the third-largest crypto exchange, intending to fully acquire it. Changpeng Zhao (CZ), the CEO of Binance, announced today that FTX had asked for Binance’s help to solve the liquidity crunch, and Binance signed a letter of intent to acquire FTX.

The agreement between the crypto behemoths is non-binding, which means that Binance can still opt out of the deal. The Binance team is going to conduct due diligence of Sam Bankman-Fried’s exchange in the coming days, but the market only saw temporary relief following the announcement.

Due to FTX's systemic importance in the cryptocurrency ecosystem, an FTX bank run could have an outsized impact on the crypto industry. So if the Binance-FTX deal does go through, CZ will become the knight in shining armor. However, Binance itself played a crucial role in the FTX-related contagion, and is likely the biggest beneficiary from it.

On Sunday, Nov. 6, CZ added fuel to the fire of investor panic when he announced to his 7.3 million Twitter followers that Binance had decided to liquidate any outstanding FTT on its books due to the “recent revelations that have come to light”, likely referring to CoinDesk’s investigation.

Back in 2019, Binance invested into FTX, then a derivatives exchange. Binance divested from FTX in 2021 and received around $2.1 billion worth of FTT tokens and BUSD stablecoins.

CZ said Binance will try to make minimal impact in the markets while it offloads its FTT and added the sale will take “a few months” to complete. Yet, it was soon revealed that nearly 23 million FTT, worth $584 million at the time, was transferred from a wallet to Binance’s exchange on Saturday. CZ confirmed the shifted funds were part of the exchange's move to liquidate its position in FTT.

CZ’s moves raised concerns related to the financial state of FTX structures and pushed down the price of FTT. Alameda's CEO, Caroline Ellison, then tweeted on Sunday that she would buy all of Binance's FTT holdings for $22 each in order to minimize the impact on prices, but it was not enough to quell market fears.

We already know how the death spiral twisted for FTX – investors started to withdraw funds from the exchange while FTT holders started selling their tokens, pushing the price down and making it harder for Alameda to pay back FTT-backed loans, and making FTX even more vulnerable.

Binance’s CZ also capitalized on the lack of FTX’s transparency. One of the reasons for FUD over FTX insolvency was the lack of public access to FTX’s cold wallets. In response to the situation, CZ announced Binance will start sharing proof-of-reserves to support “full transparency.”

Some in the crypto community point out that the feud between CZ and SBF lasts for several years for now. We suggest reading this Twitter thread for more context.

As mentioned, the agreement between Binance and FTX is non-binding and not set in stone yet. While we can hope that users are protected by FTX’s acquisition, the possibility that Binance’s due diligence yields a negative outcome can't be ruled out.

Firstly, Binance might not engage in the deal if they are not satisfied with the financial state of FTX, and specifically its sister firm Alameda Research. Moreover, Binance has already lost a major competitor, so there is no need to acquire the competitor to defeat them – FTX is unlikely to continue operating if no one steps in to save it.

Binance is also probably barely interested in the FTX brand as it's already denigrated, plus the integration of the two brands - Binance and FTX - doesn’t make much sense strategically.

Secondly, it is rumored that FTX sought a bailout of more than $1 billion from Silicon Valley and Wall Street billionaires today before it — maybe — secured rescue financing from Binance.

According to reports, the hole in FTX’s balances appears to be even larger as the crisis progressed, pushing FTX to raise up to $6 billion by midday today, a whopping amount of capital, especially given that tight timing makes emergency rescue financing more expensive.

The third ingredient is probably the U.S. CFTC, which is rumored to be monitoring the deal between Binance and FTX and may even block it. In the U.S., antitrust laws such as the Sherman Act outlaw direct competitors from acting to protect each other – exactly the case we’re witnessing today.

Commenting on the potential deal, Binance’s Zhao said in his Twitter post that he expects FTT to be “highly volatile in the coming days as things develop.”

FTT is in freefall at the time of writing, as the sentiment pivoted from excitement to concerns over the potential Binance-FTX deal being dead. According to Coin360 data, FTT crashed nearly 80% over the week, and 75% over the last 24 hours.

FTT briefly spiked from local lows recorded following the news of the deal with Binance but soon fell back within to trade as low $5.60 at the time of publishing, up from its lowest point at $3.129 today.

Like Terra and Three Arrows Capital, the crash of FTX is sending ripples through the industry, and the consequences are yet to be seen. As for the fate of FTX itself, the status of the FTT-backed loans of Alameda Research is as yet unclear. The trading firm may sell a part of its portfolio of liquid tokens in order to pay out some loans.

Another big question is the future of a bankrupt crypto brokerage firm Voyager (VGX), which FTX bailed out earlier this year. It was reported back in October that FTX.US successfully acquired the remaining assets of the bankrupt crypto broker Voyager and would be offering a recovery plan that would return about 72% of Voyager customer funds.

Solana’s SOL and the projects built on its network were also directly affected by the FTX collapse. Bankman-Fried was an early investor in Solana, and the structures affiliated with SBF are confirmed to have massive exposure to the ecosystem.

Other tokens at risk are SRM, the token of the Serum decentralized exchange Bankman-Fried co-founded, as well as MAPS and FIDA.

FTX Ventures is a major investor in Aptos Labs (APTOS), Sky Mavis (the company behind Axie Infinity - AXS), LayerZero, YugaLabs (APE) and 1inch Network (1INCH), among others. In case of liquidation, FTX would probably be forced to sell the tokens in their portfolio, thus affecting those projects.

Over the last week, many NFT collections saw an uptick with a massive rise in trading volume. Bored Ape Yacht Club topped the Coin360’s NFT leaderboard with a 1,500%+ surge in volume, but data from NFTGo suggested more sellers (+400%) were playing the game than buyers (+250%).

PudgyPenguins & Versailles Heroes also marked a 300%+ increase in daily volume, while the XCOPY collection rose amid the buyback and royalties removal announcement.

Using Coin360’s NFT heatmap, you can get a quick snapshot of the top NFT collections by volume and customize your view using various data filters. We currently work with Rarible for market data, but we’re looking to expand and improve this experience for our users moving forward.