It Takes Two to Tango

“Affairs are easier of entrance than of exit; and it is but common prudence to see our way out before we venture in.”
Aesop’s Fables, 6th Century, The Sick Lion.

Love affairs can be as intoxicating and addictive as alcohol or drugs, but the withdrawal symptoms are just as unforgettable, albeit less pleasant. Not long ago, 2008 to be exact, the global financial system was very much in a state of near collapse. Banks were failing like dominos, including the power house that was Lehman Brothers. To prevent total destruction, the Federal Reserve (Fed), alongside other major central banks not only slashed interest rates to near zero (some subsequently introduced negative interest rates), but also presented the market with a new, non-standard policy tool – Quantitative Easing (money printing – as it is known in the mass media). The aim of the game was to lower borrowing costs by buying government bonds and thereby lowering the yield. Without going too much into specifics, the market got addicted to the aforementioned liquidity provision and every time the Fed tried to end the program or indicate that rates will rise, the market went into Taper Tantrum mode. 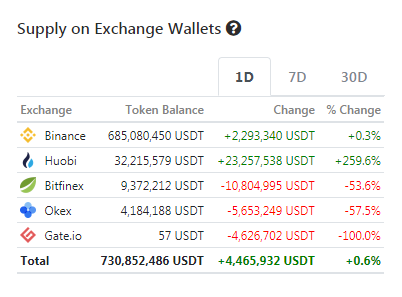 A similar dynamic has been taking place in the crypto ecosystem, where an abrupt end to stablecoin issuance results in a crypto market calamity. This is, of course, a well-documented phenomenon in the crypto universe, however, what is new this time is the supply shift from Omni to Ethereum blockchains. Recently, the trend has been dominated by one exchange - Binance (see chart below).

Tether's supply is steadily moving from Omni to Ethereum. On March 13, USDT had close to 100% of usage. As of June 9th, 82.74% of all Tether transactions were sent on USDT, while 17.26% were sent on USDT-ETH. As a guide, Ethereum based USDT can have access to any and all smart contracts, that includes decentralized exchanges (dex) as well as other open finance dapps. The significance of this trend should not be underestimated, since further movement onto the Ethereum blockchain will provide another boost to already buoyant DeFi market.

In terms of recent price action, Bitcoin continues its parabolic advance and its cryptocurrency market dominance is now above 60% - a first since April 2017. The futures curve, which still trades in contango, looks susceptible to unwind, especially heading into this week’s CME futures expiration. Still, the open interest (OI) keeps on rising and OI on the CME is at a new all-time high - $324mln, BTC premium to Sep is around 4%, while Eth is at 6% and XRP crushed from 10% to around 7%.

What is interesting is that amid the price hike, the amount of ETH locked in MakerDAO credit ecosystem has been declining and now stands at 1.42% vs its 2.11% high point in early spring. Also of note, Litecoin has underperformed the broader market, as smart money is taking profit ahead of the widely publicized mining reward halving. On Aug. 8, the reward for Litecoin’s mining will be halved from 25 coins to 12.5 coins per block.

Elsewhere, Bloomberg reported that JP Morgan is said to be receiving interest in the JPM Coin from its US, European and Japanese clients. The bank is planning to start trialing the new token as early as this year and the JPM Coin will allegedly speed up securities trading considerably as it currently can take days to finalize a trade. The coin could provide its clients with “instant” bonds delivery in exchange for cash. People will be able to buy the tokens in advance, storing them in their JPMorgan deposit account, with transfers being near-instant.